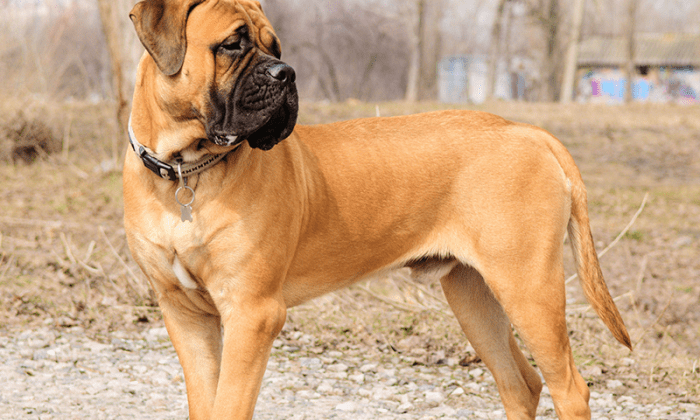 Bullmastiff dogs sound like the sort of dogs that’ll bite you at a moment’s notice.

Actually, that’s not what this dog is like at all.

Although they can be the staunchest guardians, they’re also great family pets as long as they’re well-trained and socialized.

Want to know about one of the easier dogs to care for? Read on.

A Basic Overview of the Bullmastiff Dog

True to his name, the Bullmastiff is a cross between the bulldog and the mastiff.

He’s often used as a watchdog, mainly due to his size, strength, and penchant for chasing down any intruder foolish enough not to be intimidated by him from the get-go.

Despite his natural guarding abilities, the Bullmastiff isn’t naturally aggressive.

When he’s not on the lookout for intruders, he’s probably playing with your kids and making them laugh out loud.

If you don’t like fur all over your carpets, you’ll love the Bullmastiff.

Not only does he not shed much, but he also doesn’t need to be bathed unless absolutely necessary.

However, he does tend to drool a lot. If you don’t want spittle all over your floor, make sure to keep him within reach of a towel at all times.

All in all, the Bullmastiff is a pretty pleasant pooch to have around. He’s easygoing, eager to please and doesn’t require much exercise.

Combine that with the right training and care, and you’ve got one of the best family pets you can ever have.

What is the Personality of the Bullmastiff Dog?

As a guard dog, the Bullmastiff doesn’t bark much.

Instead, he uses his scary face and muscular body to scare off would-be intruders.

If that doesn’t work, he’ll chase after the intruder and hold them in place until help arrives.

Don’t expect him to be aggressive, though. Despite being descended from the now-extinct Old English Bulldog, the Bullmastiff lacks the fiery temperament of his ancestor.

He’s nice enough to be left with the kids, so long as you remember that a dog of his size is capable of knocking down a toddler or two.

Related: The Complete Overview Of The Chihuahua Dog

The Bullmastiff does have one thing in common with today’s bulldogs: He has a crinkly-eyed charm all his own.

He may not be conventionally pretty, but his eagerness to please people more than makes up for his lack of good looks.

Be that as it may, the Bullmastiff can be stubborn when he feels like it.

He’s an intelligent and independent dog who, if left untrained, is more than capable of dominating a household.

If you want your Bullmastiff to be well-behaved, it’s important to train and socialize him early.

He needs to be exposed to as many people as possible, as often as possible.

The more socialized he is, the less aggressive he’ll be, and the happier everyone will be.

History and Background of the Bullmastiff

In the 19th century, English gamekeepers needed dogs to guard their property against poachers.

They experimented with crossing different breeds but finally settled on the Old English Bulldog/English Mastiff cross.

The Bullmastiff was so good and successful at his job that he became known as “The Gamekeeper’s Night Dog.”

Even after poaching became obsolete, the Bullmastiff was able to thrive and find work, thanks to the perennial demand for guard dogs.

Are Bullmastiffs Playful and Fun?

The Bullmastiff may look aloof, but he only seems that way.

When he’s not keeping bad people away from your loved ones, he’s keeping the bad vibes away too.

He’ll make you laugh by rolling on his belly, drooling, making funny faces, drooling, doing a trick and drooling some more.

As long as you don’t mind cleaning up after him, he’s a great pooch to be around.

Lucky for owners who aren’t exactly energetic, he’s willing to lay back once in a while.

If you need someone to wind down and watch TV with, you won’t find a better companion than the Bullmastiff.

He’s not a completely lazy pooch, however. As you’re about to see, the Bullmastiff needs to be exercised every now and then.

How Much Exercise Does a Bullmastiff Need?

If you’re not a gym buff, athlete or active person in general, the Bullmastiff is easy to be with.

For one, he doesn’t have the boundless energy that most guard dogs have.

At most, you’ll only have to walk a Bullmastiff twice a day for 20-30 minutes per walk.

You can also walk him once a day, as long as you extend the walk to 30-45 minutes.

Even Bullmastiff pups, who are usually livelier than the adults, don’t need to be exercised much.

They’ll want to let off steam, and it’s okay to let them do that, but make sure they’re not biting off more than they can chew.

Puppies are still growing, and the last thing they need is anything too strenuous for their growing bones and muscles.

There’s one more reason why Bullmastiffs shouldn’t be exercised much: Their facial structure makes them more prone to breathing problems.

You’ll want to get them moving just enough to keep their body fit, but never, ever exhaust them to the point that they’re panting too hard.

What are the Grooming Needs of the Bullmastiff?

If you like grooming to be fuss-free, you’ll love the Bullmastiff. He doesn’t shed much, and most kinds of dirt slide off him.

For the kinds of dirt that don’t slide off him easily (e.g. mud), that’s the only time you need to bathe him.

Even then, a wash in soapy water is all it takes to make this pooch clean again.

While bathing him, give your Bullmastiff a once-over. Check him for signs of infection like redness and foul odor.

The moment you see any of these signs, take him to the vet ASAP.

Also, brush his teeth at least once every other day. Clip his nails so they don’t make noises when they hit the floor.

Use a rubber curry to brush his coat and keep it shiny.

Ideally, your Bullmastiff shouldn’t be averse to grooming.

If he is, it might be a good idea to take him to a professional.

Just make sure to do a background check on the groomer, so you’ll know your dog is in good hands.

Are Bullmastiffs Easy to Train?

The best way to train a Bullmastiff is to start early.

As they grow older, they also become more set in their ways, so early training is essential to making an adult Bullmastiff well-behaved.

Bullmastiffs are smart dogs, but they won’t learn every trick right off the bat.

They need clear and consistent ground rules they can easily follow.

For example, if they need to answer the call of nature, and they’re gently encouraged to go outside every time they need to do so, they’ll learn that “outside the house” equals “toilet.”

Like all dogs, Bullmastiffs learn best through positive reinforcement.

If you want him to master a trick, praise him whenever he does something right.

You can also reward him with food, but if he doesn’t exercise much, you’ll want to keep the treats to a minimum.

Otherwise, he can become overweight.

Also, if your Bullmastiff doesn’t master a trick, don’t take it personally.

Don’t lash out at him for not doing what you want him to do.

As tough as he looks on the outside, he’s still a sensitive dog on the inside.

How Much Does a Bullmastiff Puppy Cost?

You can find young Bullmastiffs for lower prices, but keep in mind that you’ll probably get what you pay for.

If a puppy comes at a “bargain” price, he may have health issues that’ll be pricier to handle over the long term.

Consider the annual costs of keeping a Bullmastiff too.

For vet checkups, vaccinations, medical treatments, food, supplies, toys,grooming and the like, you can budget between $500 and $2,000 per year.

Of course, if your pooch needs any procedures like surgery, or if he has other special needs, his yearly expenses can be higher.

Bullmastiffs are tough on the outside, and soft on the inside. Treat them well enough, and they can be the best dogs you’ll ever own.

What are your thoughts on the Bullmastiff? Let us know in the comments below!