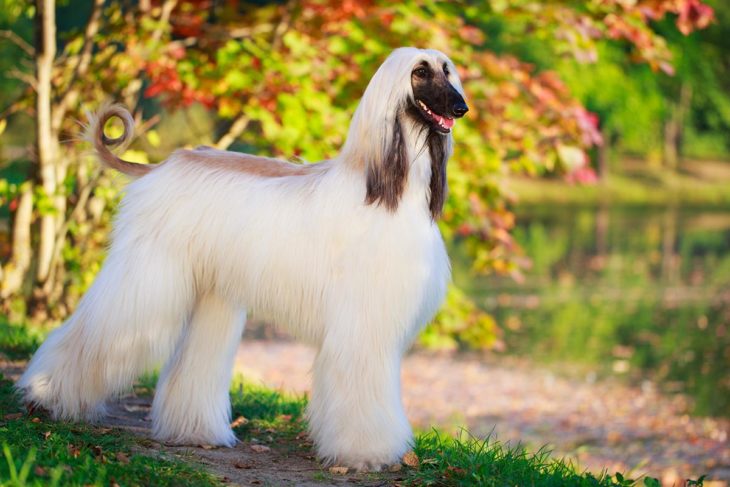 There is an air of regalness that surrounds an Afghan.

They seem to know that something good is coming their way. The people who owned these Afghanistan exports swear they are the most faithful dogs.

And other people say they are just too darn finicky for their own good. So this breed is for special people who don’t mind being upstaged by their dogs when they are in public.

The Afghan breed checks all the right boxes in terms of getting along with other pets and being great with kids.

Training can be tedious because the breed is so independent. Afghans are not afraid to spend time alone, unlike other breeds.

They are not big fans of constant petting and at times, you may not be able to touch them at all.

This dignified breed with a highly personalized personality needs special grooming. Some owners know how to groom them the right way. But because of their thick, long, silky hair, most owners take their Afghan to a professional.

If you don’t mind moderate shedding, and you like to get daily exercise, then an Afghan may be for you.

And if you are into dog shows, the Afghan has a winning record at the Westminster Dog Show. Afghans won Best of Show in 1957 and 1983.

An Overview of The Afghan Hound Dog

Afghan Hounds have a lot of names. In the U.S., they are just Afghan Hounds, but in other parts of the world, they can be called Tazi, Tazhi Spay, Da Kochyano Spay, Ogar Afgan, Sage Balochi, Persian Greyhound and Eastern Greyhound.

And if you like a large selection of color choices that include black, black and tan, black and silver, blue, blue and cream, cream, red, and silver, then an Afghan may be on your short list.

But these 44 to 75 lbs., 24 to 27-inch dogs with a lifespan of 12-14 years like to wander, and they have that “run after prey” mentality that could spoil your Saturday outing or a family picnic.

Another quality that potential Afghan owners forget to consider is their sensitivity level. They don’t like to get up close and personal with strangers.

But they can be affectionate, especially with children. They can tolerate hot and cold weather, and they can adapt to apartment living. As a bonus, they rarely drool.

In terms of health, Afghans can get sick easier than other breeds, but owners never have to worry about weight gain.

What is The Afghan’s Personality Profile?

Afghans are aloof members of the dog world, but they can also be quite comical. They are typically a one-family or one-person dog.

These members of the hound family don’t go out of their way to greet guests. They have a history of offending people because they are indifferent when it comes to most people.

Afghans are not barkers. Some Afghans may bark once or twice if they see a stranger so the breed isn’t known for its watchdog prowess.

Trying to train an Afghan can be a serious challenge because these hounds can turn their nose up at treats and foods.

Even the trainers who work with them in show rings know how temperamental they are when commanded to do something special.

This delicate breed can go into withdrawal mode if someone is trying to be rough. Gentleness and patience go a long way if you own an Afghan.

No one is sure how old the breed is. Most people start the Afghan history in Afghanistan. But Afghans are descendants of the Saluki breed which is another sight hunter group from Persia.

People living in Afghanistan call the breed Tazi, and according to several versions of Afghan history on the web, this breed is one of the oldest dog breeds. Their genes date back thousands of years.

The first Afghan breeder was an English officer who was in Kabul breeding dogs in the early 1920s.

Hounds from his kennel managed to find their way to England in 1925, and Zeppo Marx brought one to the United States in 1926.

Afghans became one of the American Kennel Club breeds that same year. In 1940, the Afghan Hound Club of America got an AKC membership.

In the late 1970s, the Barbie doll gave the Afghan breed some additional press coverage.

Beauty, Barbie’s Afghan Hound, gave Mattel something to cheer about when little girls started to buy that Barbie edition.

In the 1980s, the breed hit the big time at the Westminster Dog Show when the breed won “Best of Show.” The last time an Afghan won was in 1957.

How Does An Afghan’s Playtime Compare To Other Dogs

If you’re looking for a dog that loves to mingle every time you are around, then an Afghan is not for you. They play on their own terms.

That means they may not be ready to play when you want to because, well, your Afghan has an anti-social gene running through its DNA.

But when kids are around or the dog’s owner is ready to play, Afghans usually get up and play, but it may not last very long.

If they could talk, Afghans would probably say, “Let’s stay inside and chill.” But not all Afghans are that way.

Some have more energy than others, especially if they can chase something and then catch it. Finding prey and chasing it is an Afghan’s version of playtime.

This video will give you a good idea what to expect with this breed:

Does An Afghan Need A Lot Of Exercise?

The short answer is yes. They are sight hunters so they love to run and they like to wander.

If you’re thinking about an Afghan, you should consider the amount of exercise this breed needs. The breed has a fat-burning metabolism that most humans would love to have.

Weight is never an issue because these dogs stay active, and most of that activity can be alone if you have enough fenced property, or you have a lot of extra time on your hands to do an aerobic workout.

This breed is not for people who don’t have access to a dog park or a natural setting. They are apartment friendly, but in order for them not to pitch one of their shoe-eating, table biting, newspaper shredding hissy fits, you need some wide open spaces for them to roam.

But remember, Afghans are not very dog-friendly, so don’t get upset if your Afghan sits out at the park and just watches the other dogs.

Is It Hard To Groom An Afghan?

You might think you can groom an Afghan — until you get up close and personal. All that thick, silky hair can get knots and dirt in it. Getting tangles out requires time and patience.

The entire body is all hair except for the back. Even the ears and feet are hairy. The hair is like human hair in terms of texture, so grooming is a must

Daily brushing and combing are a priority in order to prevent tangles that can be pretty obstinate. Grooming an Afghan is time-consuming and hard to do alone.

It’s no job for a new owner, but the people who do the research and are willing to learn by trial and error can get pretty good at it.

However, most people think the only way to make an Afghan look regal is to take the dog to a professional groomer.

Most owners save themselves the time and the frustration that can make training an Afghan a nightmare. But owners with experience don’t mind training their Afghan the way they know how.

The Afghan is an independent dog, and it could take months for the dog to go potty outside. Getting an Afghan to stay where you want him or her to stay is another challenge.

Afghans respond to gentleness and love, but it may take time for them to respond. It’s almost like the breed knows what they should do, but they don’t do it until they are ready.

That makes training a long process unless you get a professional to help you.

What Is The Afghan Hound Price?

Prices vary, but Afghans are usually show dogs these days because no other dog has such an elegant and dignified look.

A puppy can cost as little as $800 and as much as $2,400. The price depends on the quality, gender, bloodline and the breeder.

If your breeder is trustworthy, you can expect to pay more than $1,000 for a healthy puppy with all the shots and registered paperwork.

A top show breeder can almost name his price.

The extra costs keep some people away from the Afghan breed. Owning an Afghan is like owning a racehorse to some people, and we all know how expensive and picky racehorses are.

Some people take a chance, and they go to the local dog adoption agency. They might find an Afghan with good bloodlines for $200 to $300.

The Afghan breed is a celebrity breed in the United States. Afghans display a special personality that has Academy Award-winning characteristics.

The people who own an Afghan know they have something special, and they are not afraid to pay for that specialness.

As we pointed out, Afghans have some issues — but when you are royalty, people tend to overlook those issues. Afghan owners truly fall into that category.