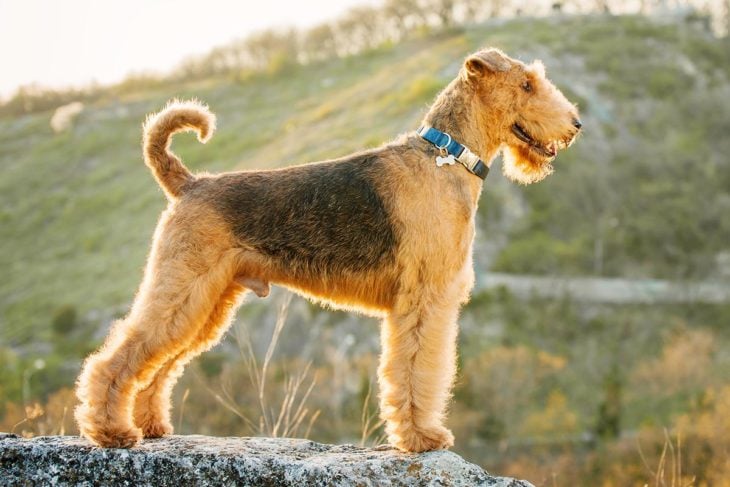 The “king of the terriers,” the Airedale Terrier, is not your average best friend.

Living with the largest terrier breed is like living with a mischievous child who craves attention.

An Airedale has almost unlimited energy and a mind that makes other dog breeds look like the cavemen of the dog world.

Airedale puppies are fuzzy, cute and cuddly, as well as stubborn, but they do grow into their role as a devoted companion.

So what is this fascination with this four-legged jokester?

Well, for one thing, they want to be part of family life.

Stealing your keys as you’re leaving for work and running around the backyard with them is a vintage Airedale move.

But Airedale’s excel in hunting, agility, search and rescue, as well as therapy and police work.

Airedale’s like to show off how smart they are, but you have to be watching when they put on that show because they may only do that smart trick once.

And forget about drills and repetitive exercises.

These big terriers love to exercise and they love to play, but it has to be on their terms.

This breed needs a lot of exercise, so get ready to spend plenty of time at the local dog park or in your backyard making sure this English breed expends its considerable energy.

If you are planning to add an Airedale to the family dynamics, you better be long on patience.

And you should be watching those Cesar Millan reruns, so you know how to train these stunning and lovable dogs.

An Overview of  Innate Qualities of The Airedale Dog Breed

The average lifespan of an Airedale is 11.5 years, but some dogs live longer.

The big Airedales go by the name Oorang.

That was the name of the early 20th-century kennel that came up with the idea to develop a larger version of the Airedale.

The average price for the Oorang is several hundred dollars higher than the regular size dog.

Independence is one of the Airedale’s strongest qualities.

Thanks to their strong hunting genes, they are aggressive and bold when it suits them.

And if an Airedale is going to spend any time with a cat, the best advice is to introduce the cat to your Airedale puppy.

A grown Airedale is usually not a big cat fan. Rabbits and mice are on his hit list too.

The breed is a mouse and vermin exterminator, so anything that moves and is close to the ground is fair game for this breed.

Those who make an Airedale part of the family must be assertive.

You can’t let an Airedale, regardless of gender, have the sense that you are meek and hesitant.

If they do, training your dog will be a struggle and one that many people lose.

If you want a breed that is strong and athletic and can learn to do almost anything, or you need a breed that can be a guard dog, then an Airedale Terrier is the breed for you.

You can’t treat them like children because they are the dog version of “Boss Baby” or a modern-day “Dennis the Menace” when their owners forget how smart this breed is around the family.

Airedale’s have herding characteristics in their personality, and they never miss an opportunity to chase another animal.

The breed can work well with livestock, but if an Airedale didn’t pass the cattle training class you spent a small fortune on.

The dog will just annoy and irritate the livestock until the animals fight back.

In spite of their ability to stir the pot with humans and animals, Airedales are intelligent, independent, and stoic.

Even though it takes an assertive person to train these beautiful animals, they make great family pets.

They may be playful, and they may not listen when an adult calls them, but if they are around children, and the children know how to speak to them, they behave.

The Airedale got its name from the Aire River Valley in Yorkshire, England.

The river had an assortment of small rodents and critters along its banks, and the farmers did everything they could to rid the river banks of these little crop-eating pests.

Before the Airedale was a breed, farmers would use five small terrier type dogs to stop the pest.

Each dog would only go after a certain kind of pest, so the obvious thing to do was find a dog that wasn’t afraid to be an exterminator for all the river bank vermin.

The farmers also had to have a dog who could swim.

Other terrier breeds do not like water and that was a deal-breaker for the farmers.

In order to get the right kind of dog, the farmers crossed the now extinct black and tan terrier with an English Bullterrier, and the offspring of that mating got an Otterhound as a mate.

Basenji Breed: Everything You Need to Know About This Dog

Some people believe the Irish Wolfhound was also part of the original mating process, and there is conjecture that the Griffon Vendeen is in the current Airedale gene pool.

The first Airedales were not as refined, but they did resemble the modern day Airedale.

The big terrier didn’t have a name, so the farmers like to call them Waterside Terriers and Working Terriers.

One breeder thought Bingley Terrier was the right name because the breed did originate in the village of Bingley.

But the other villages in the area didn’t like Bingley claiming all the credit for the breed, so Airedale Terrier was the name that stuck.

The breed’s name honors the Aire River and the local area.

How Does Airedale’s Playtime Compare To Other Dogs

Airedale’s are the kings of playtime in the dog world.

It’s not uncommon to see this breed lifting its front paws up in the air while running or chasing its tail just because an Airedale can.

The breed needs a lot of exercise and interaction.

Airedale’s want to work and play with you, not for you.

They don’t respond well when they think it’s playtime and you don’t.

We found a video showing the playfulness of Airedales:

Does An Airedale Need A Lot of Exercise?

Vigorous exercise is an important part of an Airedale’s life.

Lack of exercise can create some bad habits in this breed.

They can be destructive when they there’s no supervision, and they bark a lot when they don’t have enough exercise.

Frequent training and exercise are the remedies for bad behavior in this breed, but they can be aggressive toward other animals even though they exercise frequently.

When an Airedale doesn’t get enough exercise, the best advice is to make sure your shoes are out of the way.

Chewing shoes is the national pastime for some Airedales.

And if you want to keep the legs and cushions of furniture in good shape, make sure your pet gets a serious workout every day.

Is It Hard To Groom An Airedale?

We haven’t used the words “high maintenance” yet, but when it comes to grooming this breed, there aren’t many other words that describe the grooming process.

Brushing is just one part of the Airedale grooming process.

Hand stripping is pulling out clumps of hair with a thumb and a forefinger.

Plucking is just pulling hair out on a regular basis.

Hand-stripping or stripping with a stone or knife should be a monthly process, but most Airedale owners go to groomers to get the plucking and the stripping done.

Some owners just want to brush the breed’s coat once or twice a week.

The fluffy long tail should stay that way although docking in some parts of the world is common.

There is one basic hairstyle for Airedale’s, but some owners like to add a little detailing to the top of the head.

Some people like to blow out their dog’s hair to give them that jungle lion look, but that takes work.

The soft upper coat is easy to style for professionals, but most owners stick with the classic cut which is a significant beard, boxy snout, and a soft but wiry coat of wavy fur.

Airedale’s march to the beat of their own version of time.

Training puppies is a challenge that many people don’t want to tackle.

The breed’s attitude toward strangers can vary from friendly to moderately aloof.

They tend to be aggressive with other dogs, so this breed needs special training unless you are assertive and knowledgeable enough to tackle the training on your own.

The breeds strength, energy level, and stubbornness make training a challenge for owners as well as professionals.

How Much Does An Airedale Cost?

Because Airedale’s are high maintenance, stubborn, and have guard dog qualities, they attract people who are not afraid to deal with the breed.

The average cost of an Airedale puppy is $700.

However, the initial cost is just the beginning of ownership costs.

The cost of maintaining a member of this breed over its lifetime could range from more than $5,000 to well over $100,000 if the owner gives the dog the royal treatment.

The royal treatment includes the best of everything from bowls, doctors, toys, and vaccines to anything else that can make the dog’s life posher.

Airedale Terriers have a reality TV aura to them.

They are masterful entertainers, but they can also turn over a small table or two just to show their emotional authority.

Sure they like chew rugs to pieces, and they can turn a backyard into a war zone when they go on the hunt for moles.

But there is something special about this fun-loving canine.

Perhaps it’s the way they know what you’re thinking, or the way they give you a nose poke at the dog park just to let you know they are watching you.

Whatever you call that innate quality in an Airedale, one thing is true about them.

They will win your heart while they methodically change your attitude and patience.