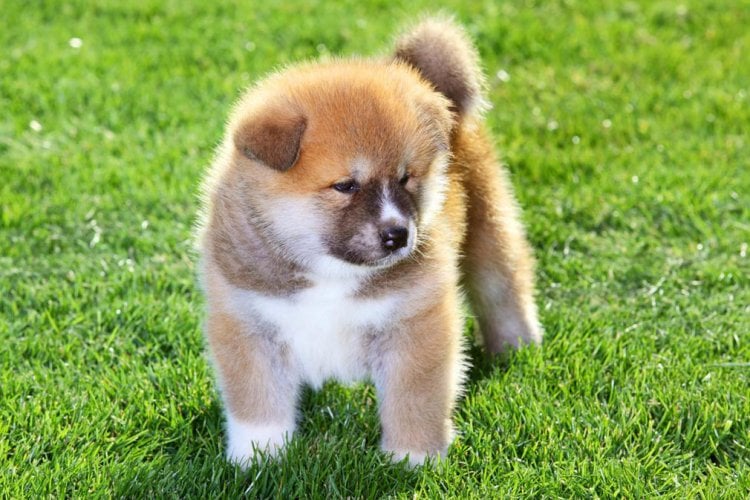 Yes, that film made us cry too. It’s so heartbreaking to watch a dog wait 10 years for a dead master.

No doubt “Hachiko” made the Akita famous all over the world.

However, there’s more to this pooch than his undying loyalty.

As you’re about to see, the Akita has other wonderful qualities that are worth a second look.

A Basic Overview of the Akita

Some people call the Japanese variant “Akita Inu” (lit. “Akita Dog”) to tell him apart from his American cousin.

Indeed, there are a few physical differences between the American and Japanese Akita.

American Akitas are usually larger, and have more variation in their colors and markings than their Japanese cousins.

Their personalities aren’t that much different, though.

Both American and Japanese Akitas are stubborn, brave and shed heavily — not a good combination for someone who’s laidback about caring for their pets.

On he other hand, if you’re an experienced dog owner who lives in a large house, and have more than enough time to look after a willful and lively dog.

The Akita shouldn’t be too much of a problem. If he’s well-trained and cared for, he can be an awesome mix of protective, loyal and affectionate towards your family.

What is the Personality of the Akita?

The Akita isn’t naturally friendly. He’s skittish around strangers, other pets and other Akitas of the same sex.

He can also be aggressive, unless he’s been socialized to do otherwise.

What he lacks in friendliness, he more than makes up for in his utter devotion.

As the story of Hachiko shows, the Akita always makes sure his family is safe no matter what happens.

Bred as a guard and hunting dog, the Akita has energy in spades.

He always needs to be “working” on something; otherwise, he’ll work off his boredom by tearing your curtains apart.

For a spirited dog like him, it’s always a good idea to have a chew toy or something similar nearby.

Despite his reserved demeanor, the Akita can be noisy when he wants to be.

He’ll grumble, moan and bark at the slightest hint that something’s wrong.

Some Akita owners even joke that their dogs have a running commentary on everything from the news on TV to the breakfast you’re making for the day.

All in all, the Akita is a strong, confident dog who does his own thing.

If you can put up with his quirks, he’ll reward you with years of fun, warmth and loyalty.

History and Background of the Akita

All Akitas trace their ancestry to Japan — specifically, the northern prefecture of Akita.

There, the Matagi tribe raised dogs brave and powerful enough to hunt deer, boars and even bears.

Later, Japanese aristocrats picked up the dogs, and used them in pretty much the same way as the Matagi did, except the pooches also served as guards.

In the 20th century, the Akita became a household name thanks to Hachiko’s story.

However, even Hachiko couldn’t save his breed from becoming almost extinct in the 1940s, when Japan suffered from post-war starvation.

Fortunately, hard times would soon come to an end. When the U.S. occupation of Japan began, American servicemen found themselves falling in love with the Akita.

They were particularly impressed with the larger bearlike version of the dog, which they brought to the U.S. to eventually become the American Akita.

Meanwhile, the Japanese Akita survived and thrived. The breed’s legendary loyalty would be immortalized in films like “Hachiko: A Dog’s Story,” as well as other similar stories of love and devotion to this day.

Are Akitas Playful and Fun?

The Akita may or may not be playful, depending on who he’s with.

When he’s with people he knows well, the Akita has no qualms about letting loose.

He’ll let you know — in the flashiest way possible — that he’s right there beside you, or that he’s really, really itching to get his legs moving.

When he’s with strangers, however, the Akita is a lot more skittish.

Unless he’s socialized at an early age, he can become aggressive towards people and pets outside his “pack.”

In general, the Akita prefers to be the only pooch in the house. He may not take too well to any new additions to the family.

If you’re bringing home a baby or another pet, make sure you get your dog used to the new arrival.

How Much Exercise Does an Akita Need?

Considering all the hunting, guarding and fighting he did back in the day, it’s no surprise that the Akita is a big bundle of energy.

For him, rigorous daily exercise is a must.

If your Akita is still a puppy, there’s no need to push him to his physical limits.

His body is still developing, so any pressure on his bones and muscles should be kept to a minimum.

Brisk, thrice-a-day walks for 10 to 15 minutes each should be enough.

Once your Akita is fully grown, he can progress to 30- to 40-minute walks three times a day.

You can also let him tag along when you’re cycling, hiking and doing other similar activities.

You can even let him play in the park without a leash, as long as he’s been socialized early on.

If there’s extra room in the budget, you can enroll your Akita in agility classes that will help him boost his strength and stamina.

Just be careful not to let him do anything like high jumps, which can seriously injure a dog of his build.

What are the Grooming Needs of the Akita?

For the most part, the Akita isn’t hard to groom. He’s like a cat in a way, capable of cleaning himself when he needs to.

However, the Akita is a heavy shedder. You’ll want to invest in a quality brush to keep tangles and matting off his fur.

An Akita should be bathed only once every three months or as needed (i.e. when your Akita is soaked in dirt).

While bathing your Akita, check him for signs of infection like redness and foul odor.

Also, use a soft cloth soaked in a gentle solution when cleaning your Akita’s sensitive parts (e.g. outside his ears and around his eyes).

Trim his nails once they start making noises on the floor.

Most importantly, get your Akita used to grooming even as a puppy. That way, he’ll be less resistant to the process as he gets older.

Are Akitas Easy to Train?

Because of their size and strength, Akitas find it easy to dominate others — including timid, hesitant owners who don’t know how to set boundaries.

If you want your Akita to be well-behaved, you need to give him the impression that you’re at least as strong and confident as he is.

For example, if your Akita asks for food at the table, and you cave in to his soulful puppy dog eyes, he’ll think it’s okay to do it again and again.

But if you firmly refuse to give him food under the same circumstances the first time, and any other time after that, your Akita will get the message loud and clear.

That said, you should never punish or harshly treat an Akita.

He should be trained using positive reinforcement — that is, rewarded for his successes instead of scolded for his failures.

It might take a while for your Akita to become the obedient dog you want.

That’s okay: What’s important is to be patient and persistent even when things get tough.

Before you know it, you’ll have a well-trained dog on your hands.

How Much Does an Akita Puppy Cost?

That includes papers, health checks and a virtual guarantee that you’re getting your dog from a reputable breeder.

Unless you’re buying from a rescue group, a “cheap” Akita is usually a sign that you’ll be dealing with a boatload of health and behavioral issues moving forward.

Also, factor in the annual costs of raising an Akita. For vaccinations, medical treatments, food, supplies, toys, grooming, training and the like, you’ll probably shell out between $500 and $2,000 or possibly even higher.

Of course, if you get a healthy Akita from the get-go, you can keep medical bills to a minimum.

With the right care and training, an Akita has the potential to be your very own Hachiko.

If you agree, or if you have any other thoughts about this breed, let’s hear about them in the comments!