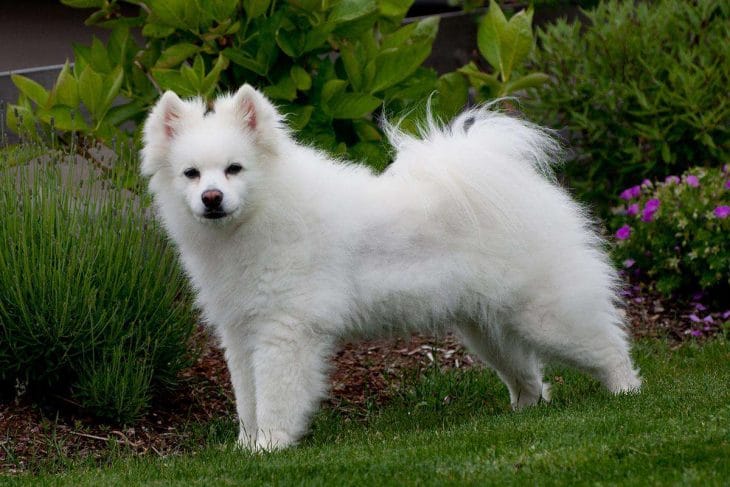 With their fluffy white coats, adorable faces, and always-pleased-to-meet-you vibe, American Eskimos will have you cooing over them in no time.

American Eskimos can live almost anywhere, although they suit some owners more than others.

Before you decide on one of these beauties, here’s what you need to know about the American Eskimo dog.

American Eskimos, or “Eskies,” are members of the Spitz family, which includes Pomeranians and Samoyeds.

Like all spitzes, they have erect ears, foxlike faces, bushy coats and a tail carried over the back.

They also come in three sizes: toy, miniature, and standard.

Being a Nordic breed, the Eskie has a double coat, comprised of a long, thin outer coat and a short, dense undercoat.

They can be either pure white or white and cream.

They look like Samoyeds. except smaller and not likely to want to pull anyone’s sled.

Eskies are intelligent, independent and adaptable.

Since they’re bred as companion dogs, they can go with just about anyone — whether you live alone in a studio, or with your family in a mansion.

As long as he’s well-trained, the Eskie should have no problem being one of the best friends you could ever have.

What is the Personality of the American Eskimo Dog?

The Eskie has a fairly balanced personality.

They’re friendly enough to get along with other pets and small children, but wary enough to bark if anyone suspicious comes within their vicinity.

Because they were bred as circus performers, Eskies are capable of picking up most of the tricks you teach them.

Don’t expect them to go running after Frisbees, though:

This breed is no retriever.

Eskies can also be willful and independent, to the point that you’ll often feel that this dog is training you, not the other way around!

You’ll need patience and a firm but positive approach to get this pooch to acknowledge you as the pack leader.

Speaking of packs, Eskies are very protective of the ones they consider family.

If they so much as sense a stranger, they’ll bark and bark until you do something about the intruder.

They’re usually not aggressive though, so don’t worry about them biting anyone.

They need to always have something to do, whether it’s chewing on a toy or running around in your yard.

Otherwise, all that excess energy (and sharp teeth) goes into places where you’d rather they not go.

History and Background of the American Eskimo Dog

No one really knows where the American Eskimo dog came from.

But one thing’s for sure: They’re neither Eskimos nor Americans.

It’s believed that Eskies are descended from white German spitzes who immigrated to America along with their owners.

The breed rose to fame as a circus performer in the 19th century, where they performed awesome feats like walking on tightropes.

Their skills, combined with their natural beauty, made them a hit with audiences, who had the opportunity to purchase them as pets afterward.

It wasn’t until 1917, however, when the breed was renamed as the “American Eskimo” for reasons no one really knows.

Fast forward nearly 80 years later, the American Kennel Club (AKC) officially recognized the Eskie as a non-sporting breed in 1995, and that’s how this pooch came to be.

The short answer is “Yes.”

The long answer? Eskies love doing tricks — whether taught to them by their owners, or the ones they invent on their own.

You can have them dance on their hind legs, roll over like the adorable fluff balls they are, or play a good old-fashioned game of “Tag” in your backyard.

Because of their fun-loving nature, Eskies make excellent pals for children. Kids will love this pooch’s willingness to do anything to make them smile.

All About the Great Dane Pitbull Mix

Everything You Need To Know About The White German Shepherd

But be careful not to leave your Eskie unsupervised with small children:

This pooch isn’t always able to rein in his tendency to jump all over his pack members.

Basically, the Eskie’s circus origins are very much embedded in his DNA.

If you’re looking for a pooch who’s eager to please and whose middle name is “Play,” look no further.

How Much Exercise Does An American Eskimo Dog Need?

Eskies require a moderate amount of exercise for at least 45 minutes each day.

They’re not high-energy dogs like border collies or inclined to retrieve like Labs, so make sure you tailor their exercise regimen accordingly.

Because they live and breathe tricks, Eskies need activities that maximize their agility, intelligence, and problem-solving capabilities.

You can set up obstacle courses for them, or you can improvise by having them climb rocks, run across park benches, and do anything else that gets them going.

If you’re feeling adventurous, or if you have the skills for it, you can have your Eskie do what it was bred for  — circus tricks.

As long as you’re careful to avoid any accidents and consult a professional beforehand, you can make the most of your Eskie’s showmanship skills.

Keep in mind that different Eskies have different energy levels and exercise needs.

If your Eskie seems agitated with low-level exercise, it’s probably a sign to switch things up a notch.

But if your Eskie is showing signs of exhaustion (like panting), better dial it down a bit.

What Are the Grooming Needs of the American Eskimo Dog?

Looking at the American Eskimo dog, you’d think it would be a chore to groom — and you’re right.

That bushy double coat requires plenty of maintenance, though not as much as you think.

Eskie fur is covered in a natural oil that allows dirt to slide off of it easily.

If the fur is dry, and you notice a bit of dust here and there, you can literally brush them off.

However, Eskies tends to shed a lot.

If you want to keep hairballs to a minimum, give your pooch a thorough brushing twice or thrice a week.

You don’t have to bathe your Eskie too often. Unless they get really dirty, a bath every couple of months will suffice.

Otherwise, you’ll risk drying out your Eskie’s skin, not to mention cause other skin problems.

Give their ears and eyes a good cleaning too.

Do the same for the area around their eyes, since moisture can cause that area to discolor.

Don’t forget to trim their nails at least once a month.

On the one hand, their intelligence means they can pick things up pretty quickly.

On the other hand, their natural willfulness means it’s a challenge to have them do exactly what you want every single time.

The key is to train them as early as possible. Start with basic commands like “sit,” “stay” and “heel.”

Use a leash to gently tug at his neck and direct him to where you want to go.

It’s also worth noting that the Eskie loves barking to a fault.

To keep their barking (and your neighbors’ complaints) to a minimum, train them to respond to the word “Quiet.”

Whenever they bark at a random noise outside, for example, say “Quiet” while using a training clicker near your dog.

Not only will this draw your dog’s attention and get him to stop barking, but it’ll also help your dog equate “Quiet” with “Don’t Bark.”

If you do this right, stopping your Eskie’s barking will be as simple as saying the magic “Q” word.

How Much Does an American Eskimo Puppy Cost?

Assuming that you’re buying from a reputable breeder, expect to pay between $600 to $1,200 for a puppy.

That may look like a steep price, but keep in mind that you’re paying for paperwork proving that you have a properly-bred Eskie on your hands.

You’ll also have to budget for the yearly upkeep of your Eskie.

If you factor in the costs of food, grooming, vaccinations, deworming, vet bills, training, supplies and other things necessary to keep your pooch happy and healthy, it can add up to $500 – $2,000 per year.

Overall, Eskies are a well-balanced breed.

They’re beautiful but not (too) high-maintenance, independent but trainable, and friendly but wary.

If that sounds like a great combo for you, this breed might be the pooch for you.

What do you think of the Eskie?