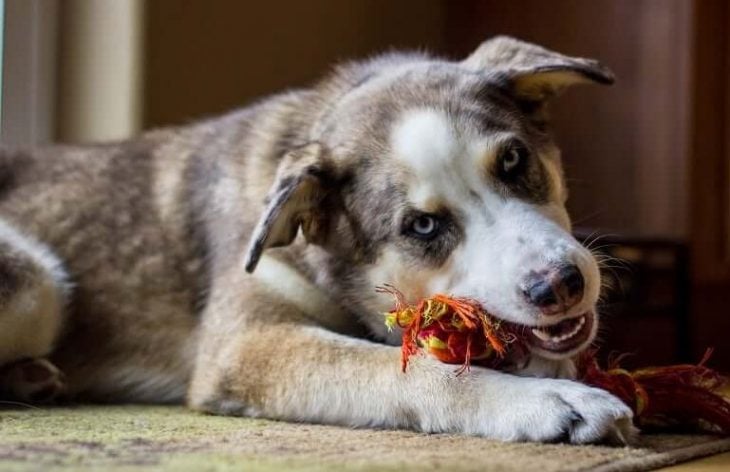 He is one dog you can’t look away from.

Bold like the Aussie and beautiful like the Husky, the Aussie Husky doesn’t have to try to be captivating. He just is.

If you’re itching to buy this dog for yourself, check out our handy guide to the Australian Shepherd Husky Mix.

All About The Australian Shepherd Husky Mix

What Is an Australian Shepherd Husky Mix?

As his name implies, he’s the hybrid of the Australian Shepherd and Siberian Husky.

The Aussie Husky is a designer dog, meaning he’s a mix of two different purebreds. In his case, one parent is 100 percent Aussie, while the other is 100 percent Husky. If there’s anything else mixed in there, he’d be more “mutt” than “designer breed.”

Since both his parents are working breeds, the Husky Shepherd isn’t the type to roll over and stay put. He gets moving whenever he wants, however he wants — whether his owner likes it or not.

He’s not a dog for couch potatoes, people who live in cramped spaces, and people who can’t give him their full attention.

If none of the above sounds like you, here’s what you need to know about the Australian Shepherd Husky Mix.

Designer dogs are like boxes of chocolate. You never know what you’re going to get.

(Not that you should ever give Fido chocolate. It’s one of the many human foods toxic to dogs.)

A Husky Shepherd Mix can be more Aussie-like or more Husky-like. He can be stocky like the former or athletic like the latter. He can be bossy like the Aussie, or frisky like the Husky. He can be brown, gray, cream, black, white, or any combination of the above.

Because Aussies and Huskies have a lot in common, Aussie Huskies tend to have uniform looks.

Aussie Siberians can have the ice-blue eyes of the Husky or the bi-colored eyes of the Aussie. Either way, you’ll be fascinated by the windows to this pooch’s soul.

Another thing Australian Huskies have in common is their dense double coat. Thick coats translate to lots of shedding, so get ready to do lots of vacuuming with this dog around.

Truth is, there’s no telling how an Aussie Husky will turn out. It’s not unusual for puppies from the same litter to look different from each other — to the point that you’ll wonder if they’re the same dog!

The only way to know if a dog is a Husky Shepherd is to ask the breeder. Are his parents a purebred Husky AND a purebred Aussie? If it’s a “No” to either or both questions, consider looking somewhere else.

Personality-wise, an Aussie Husky will take a little bit from both his parents.

The Australian Shepherd temperament is based on the need to protect. Aussies don’t merely follow their human masters: They are great leaders in their own right. They have their own way of doing things, which is useful if you’re a hands-off owner but not-so-good if you’re trying to train him.

The Husky temperament is also somewhat independent, although nowhere near as bossy as the Aussie’s. Huskies are notorious escape artists. If they’re not wandering off to chase after a scent, they’re probably pulling a disappearing act a la Houdini.

That’s not to say that neither of these dogs care about their humans. Au contraire, both the Aussie and Husky are loyal and affectionate towards their family. Granted, they’re wary around strangers, but they’re never aggressive as long as they’ve been socialized early on.

When you mix an Aussie and Husky together, you get an energetic, independent dog with a stubborn streak and a heart of gold. As long as you don’t mind his occasional bouts of disobedience, you two will get along swimmingly.

How To Train An Australian Husky

Aussies and Huskies are both highly intelligent. However, as any experienced dog owner will tell you, high intelligence isn’t necessarily the same as high trainability.

Both the Aussie and Husky have a stubborn streak, so expect their hybrid to be the same.

The best way to train a potentially willful dog is to start early. The moment your Aussie Husky Mix is able to walk, teach him the basics.

If your dog isn’t sitting when you say “Sit,” it means you need to take a different approach. Remember that dogs can’t understand human speech, but they can understand gestures and the actions associated with them.

Sometimes, you don’t need words to train an Australian Shepherd Mix. For example, if you take your puppy outside every time he’s about to “do his business,” he’ll soon learn to think of the outdoors (instead of your carpet) as his toilet.

No matter how you choose to train your Husky Mix, it’s important never to treat him harshly. Yelling and hitting your dog will only make him afraid, confused, and unwilling to learn.

Also, dog training doesn’t have to happen in a vacuum. (In fact, it shouldn’t.) A Husky Mix is usually suspicious of strangers, so get him used to other people early on.

If you have other pets, get him used to them too. The last thing you want is two of your best nonhuman friends to be in each other’s fur/feathers/scales.

Not sure how to train your Husky Shepherd? Get a professional trainer to help you. A good trainer will not only tell you what to do: He’ll also give you insight into why your dog acts the way he does. If you can find a trainer like that, you’re all set.

How To Groom An Aussie Husky Mix

The Aussie Husky is definitely not hypoallergenic.

His coat might protect him from the elements, but it won’t protect your floor from getting covered in fur.

Australian Shepherd shedding is a year-round occurrence, so get a high-quality brush if you’re planning to keep an Aussie Husky.

Brush him at least once a week to prevent matting. Come shedding season (i.e. the warmer months), you can brush him once every other day.

Although Aussie Huskies need frequent brushing, bathing doesn’t have to happen as often. Some people don’t bathe their Aussies more than a few times a year, and experts recommend not bathing a Husky more than once a month. Unless your Australian Shepherd Husky falls in a pool of mud, he’s more than capable of keeping himself clean.

If he does fall in a pool of mud, take bathing time as an opportunity to inspect him. Look out for signs of infection and disease, such as redness, foul odor, flaking and anything else that shouldn’t be on a healthy dog. Also, clip his nails once they get long enough to make noises on the floor.

In case you’re not keen on grooming your Aussie Husky, you can let someone else do it for you. Find a groomer who specializes in (or is at least experienced with) grooming pooches with dense double coats. Also, make sure your dog is comfortable with the groomer: He’ll be spending a few hours with the guy, after all.

What Are The Health Problems of An Australian Shepherd Husky Mix?

However, he can inherit certain diseases from his parents. Some of them are hip dysplasia (common in large dogs), eye disorders (cataracts, corneal dystrophy, progressive retinal atrophy, coloboma), epilepsy, and allergies.

Sadly, not all of the above can be detected in a growing puppy. Like humans, dogs deteriorate physically as they age. Diseases can take a toll on a dog, no matter how healthy they were as pups.

That said, regular checkups with the vet can make a world of difference. The healthier your dog is during his best years, the more he’ll enjoy life no matter how long it lasts.

How Much Is An Australian Shepherd and Husky Mix?

Assuming you’re buying from a reputable breeder, expect to pay around $600 to $1,000 for an Australian Shepherd and Husky Mix puppy.

That price, by the way, doesn’t include the annual costs of caring for your dog. These costs include food, supplies, training, grooming, vet visits, vaccinations and medical treatments. Considering those, you’ll be adding about $1,000 to $4,000 per year.

If you adopt from a shelter, you can get an Aussie Husky for a much lower price. However, there’s no guarantee that the dog won’t have behavioral problems, especially if it’s an adult.

The easiest place to buy Australian Shepherd Husky Mix puppies is the Internet.

Whether you’re browsing sites like Craigslist or having a Skype chat with a prospective seller, owning a designer dog is as simple as clicking a few buttons.

“Easy” isn’t always the same as “right,” though.

When you literally can’t see your seller or all you have to go by is how they present themselves online, there’s no guarantee you’ll get what you’ll pay for.

Getting what you pay for is especially crucial for designer dog breeds. In the hands of a skilled and ethical breeder, a designer dog combines the best of both his parents.

In the hands of a not-so-ethical breeder, a designer dog can come with a boatload of genetic and behavioral problems that’ll break your bank, and then some.

If you want to be 100 percent (or at least 99 percent) sure of getting the best Aussie Husky Mix, you may want to drop by your nearest breeder.

Ask them if they breed Aussies, Huskies and/or a combination of the two. Be ready to pepper them with questions like:

Of course, you also want to be sure of the things the breeder is not telling you. Take a look at the dogs’ surroundings. Are they clean and well-kept? Or does the place feel like it hasn’t been cleaned in months? Do the dogs seem healthy and happy? Or do they seem like they’re scared of something? Don’t hesitate to trust your instincts, especially when it comes to your four-legged friend-to-be.

The Aussie Husky In A Nutshell

There’s no middle ground with the Aussie Husky. Either you’re hopelessly in love with him, or you wish you had more time, energy, and attention to spare him.

Whichever camp you fall in, you can’t deny one thing: The Australian Shepherd Husky Mix is one dog you can’t ignore. He’s brave, beautiful, and almost catlike. He’ll love you or ignore you depending on how he feels at the moment.

Now, we’d like to know how you feel about this dog. Do you have an Aussie Husky, or know someone who does?