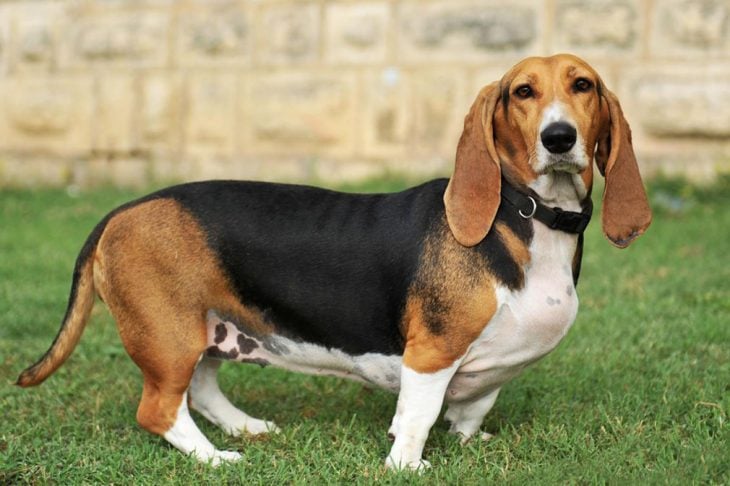 Basset Hound: One Of The Most Recognizable Dog Breeds In America

The Basset Hound is a lot of things, but "graceful" isn't one of them.

After all, when you have short legs and a long body, it's not easy to gallop around like a greyhound does.

Still, something about this pooch makes you take a second look. Whether it's their complete mastery of the "puppy dog" face or the fact that they look dignified in spite of themselves, the Hush Puppy is a quintessential American dog.

A Basic Overview of the Basset Hound

If there's one Basset Hound feature you can't miss, it's the ears. Long, floppy and hanging low on the ground, those ears are the longest in the dog world.

You also can't miss his "short legs, long body" combo, which gives him a somewhat wobbly gait when he's running. But make no mistake: That body shape comes in handy for following rabbits down their holes.

And if you've ever looked at his face and thought "Hm, kinda reminds me of a bloodhound," you're onto something. That's because Basset Hounds are, in fact, related to bloodhounds.

Normally, the Basset Hound comes in tan-and-white or black-tan-and-white color combos. Their fur is quite short, but it does shed constantly, so if you think this is a low-maintenance breed, think again.

Personality-wise, Basset Hounds are family dogs through and through. They love their owners to bits, and they'll follow you around whenever they can.

Be warned, though: Basset Hounds can be very, very stubborn. If you want to have this pooch as a pet, prepare to invest a lot of time and patience into teaching your Basset the laws of your house.

What is the Personality of the Basset Hound?

The Basset Hound only looks lazy and docile.

When he's not lying around on his favorite couch, he's probably tailing after his human family or sniffing around the house.

Being a pack dog, Bassets like to be surrounded by people they trust and can get lonely and noisy when you leave them alone for too long.

Fortunately, his pack tendencies mean that he's not likely to be aggressive, and can be socialized to get along with other pets.

Bassets love to eat, but since they also love to lie around, they can be prone to obesity problems. If you find yourself giving in to those big, mournful eyes every time he "begs" for a treat, be sure to balance his calorie intake with enough exercise.

Related: Basenji Breed: Everything You Need to Know About This Dog

Basset Hounds may not be the liveliest indoors, but they're quick to let you know if there's anyone suspicious around the house. They let out a loud baying bark that you can hear from several yards away, which makes them excellent watchdogs.

Overall, Bassets are gentle and sociable pets that are happiest when they're with families, and when they have a large space to run around in.

They can also make good companions for solo owners, as long as you're willing to give them the love and attention they deserve.

History and Background of the Basset Hound

As their facial features suggest, Basset Hounds were bred from bloodhounds. Specifically, they're believed to be descended from Norman staghounds, which in turn came from the St. Hubert's Hound, an early version of the bloodhound.

It wasn't until the 16th century, however, when the word "basset" was first used to describe dogs bred to hunt badgers and foxes.

After the 18th century French Revolution, hunters began to prize dogs who could be followed on foot, since hunting on horseback was associated with the deposed aristocracy.

Ironically, the Basset's popularity peaked around the reign of Emperor Napoleon III, and the breed made its way to England.

There, the breed was further developed near the end of the 19th century before coming to the U.S., where it eventually became the beloved Hush Puppy we know today.

Are Basset Hounds Playful and Fun?

If you like laidback pooches, you'll love the Basset Hound.

Bassets aren't high-energy dogs, so you're not likely to find them jumping all over the place. They'd rather sit back, relax and enjoy the company of the people close to them.

That's not to say they don't have a mischievous side. Like most dogs, Bassets aren't keen on being left alone for too long, and can get destructive unless you calm them down somehow.

Giving them treats can relax them, but only if you're 100 percent sure they haven't eaten enough for the day. You can also distract them with safe chew toys, or get another dog to keep them company.

Again, Bassets are pack animals, so you want to reassure them with a comforting presence as much as possible.

How Much Exercise Does A Basset Hound Need?

Unlike breeds like the Australian Shepherd Lab Mix and Basenji, Bassets only need a moderate amount of exercise.

As long as they have an outdoor space where they can stretch their legs and run, Bassets can keep their weight at a healthy level.

Even though Bassets are small, their bones are surprisingly dense, which puts pressure on their already-short legs.

That, coupled with a few extra pounds, can cause your pooch to have some problems with his feet, so taking him out for a walk every day is essential.

If it's not possible to walk him outside for any reason (e.g. it's snowing heavily, or you live in the city and don't have access to large and safe outdoor spaces), you might have to make do with giving him space inside your home.

Since Bassets tend to laze around when they're indoors, however, getting him on his feet can be a challenge.

Still, if you're not really into high-intensity exercise, you'll probably appreciate the Basset Hound's laidback tendencies.

What are the Grooming Needs of the Basset Hound?

By itself, the Basset Hound is pretty easy to clean.

His smooth, short fur naturally repels debris, so even if he somehow manages to get down and dirty, he's not likely to require more than a brush or two.

That said, Basset Hounds shed plenty. Unless you're willing to wash your carpets every now and then, you may want to reconsider the idea that this pooch is a "low-maintenance" breed.

Also, you'll want to clean out his ears once in a while. Since they're long enough to touch and drag along the ground, Basset ears are prone to get infected.

You can ask your vet for a safe, gentle solution to use on your pooch's ears, and wipe it off with a soft, damp cloth.

Don't forget to brush your Basset's teeth at least twice a week, and trim his nails at least once a month. Give him a thorough inspection to make sure there's nothing out of the ordinary, and get help from a professional groomer if necessary.

However you choose to groom your Basset Hound, it's important that they feel safe and secure throughout the process.

The better their experience with grooming, the more likely they'll stay put as you do sensitive things like touching their feet or checking their teeth.

Are Basset Hounds Easy to Train?

Ask a Basset Hound owner to describe their pet in one word, and chances are you'll hear the word "stubborn" nine times out of ten.

Despite being outwardly gentle and docile, Bassets can be surprisingly difficult to train. It's not because they don't "get" what they're being trained for.

Quite the contrary -- because they're so intelligent, they're not likely to want to heel just because someone tells them to.

As you can imagine, you need lots of patience and confidence to train a Basset Hound. You'll be tempted to shower them with doggie treats if it means getting them to obey.

However, while that's a good strategy as far as positive reinforcement goes, you don't want them to get the impression that obedience always equals food.

Considering their tendency to get obese, you'll want to come up with more creative ways to train your dog.

Better yet, start training your Basset as early as possible. As soon as they're old enough, take them outside whenever they need to defecate or urinate.

Keep them in a crate if you have to leave them for a period of time. Use strong-smelling treats like liver to reward them for good behavior, since Basset noses are more sensitive than the average dog's.

How Much Does a Basset Hound Puppy Cost?

For a puppy with papers minus breeding rights, expect to pay around $750.00. You can get a puppy for less without papers, but we don't recommend those since you can't be sure of the quality of dog you're getting.

For a puppy with papers, breeding rights and show quality lineage, the price is at least double, ranging from $1,600 to $6,000 and higher.

There's no doubt about it, the Basset Hound is a strong contender for the top all-American dog. With its unique combination of clumsy yet dignified, this Hush Puppy will win your heart and more.

What are your thoughts on the Basset Hound? Let us know in the comments below!