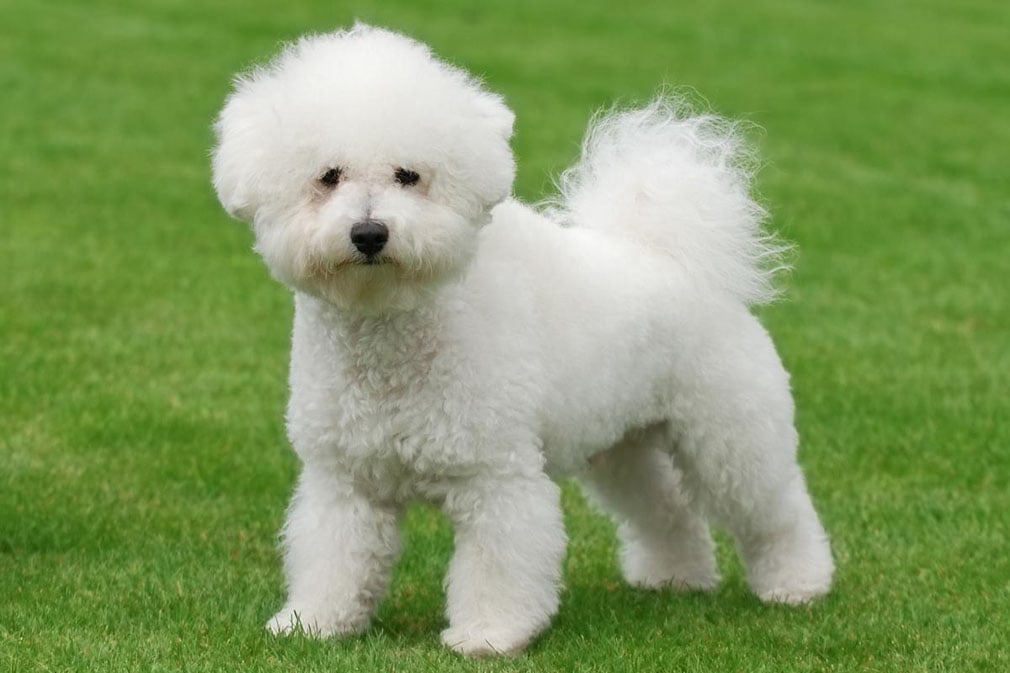 Bichon Frise: Things You Need To Know About This Merry Little Dog

If there’s one pooch that should be on every “World’s Cutest” list, it’s the Bichon Frise (pronounced BEE-shawn FREE-say).

With their cotton ball looks, bubbly personality and liquid eyes, Bichons will make you go “aww” before you know it.

For a brief 101 on the Bichon, read our guide below.

A Basic Overview of the Bichon Frise

Instead, the American Kennel Club (AKC) classifies them in the non-sporting group, meaning these dogs are usually bred as house pets or for show.

There are also grey or apricot Bichons, as well as larger/heavier ones than specified above.

Unlike the small white ones however, these Bichons aren’t recognized for show purposes.

Because Bichons don’t shed as much as other breeds, they’re often recommended for people who have allergies.

That’s not to say they’re low-maintenance: On the contrary, that puffy coat requires a lot of upkeep!

Still, if you want a dog small enough to keep in an apartment, and playful enough to cheer you up on your bad days.

Having a Bichon may be one of the best decisions you’ll ever make.

What is the Personality of the Bichon Frise?

Personality-wise, Bichons are playful, cheerful and an overall joy to be around.

They love it when you shower them with attention, and they’ll take any chance to make people happy — whether it’s at a family get-together, or even a regular visit to your vet.

Like most extroverts, Bichons don’t take well to being left alone.

If you’re not around for more than a few hours, they’ll take out their frustration on your furniture and anything else they can sink their teeth into.

Luckily, you can soothe their separation anxiety by crate training them as soon as they’re old enough.

Separation anxiety aside, Bichons are generally intelligent and independent.

Descended from 19th century circus performers, they can perform awesome tricks like play dead, weave heeling and cookie on the nose.

Even without knowing these tricks, Bichons still have a natural knack for entertaining people.

Bichons can also get along well with those outside their “pack” (i.e. their family), provided you socialize them as early as possible.

Some ways to socialize a Bichon include exposing them to other people (like visitors to your house), and taking them out for walks to meet other dogs.

On the other hand, being highly sociable means that Bichons don’t make good guard dogs.

If unwanted strangers come around the house, they’ll probably greet them happily instead of telling them off. So if you’re thinking of getting a Bichon as a burglar alarm, think again.

History and Background of the Bichon Frise

Experts can’t really agree on where the Bichon came from.

Some believe that the breed can be traced back to the barbet, a medium-sized water dog.

Others say that Bichons came from Tenerife, one of the Canary Islands, and that French sailors brought them home from there during the 14th century.

Still others believe that it was the Italians, rather than the French, who brought the Bichon to Europe.

Regardless of its actual origins, we do know that Bichons became popular with the European nobility around the 16th century.

Related: The Pomeranian Dog: All The Facts You Need to Know About This Wonderful Breed

By the late 1800s however, the breed lost its reputation as a status symbol, and were reduced to being circus performers or guide dogs for the blind.

Fortunately, French breeders decided to revive the breed sometime after World War I.

In 1956, the Bichon Frise was brought to the United States, where it took nearly 20 years before the breed was officially registered with the AKC in 1972.

Needless to say, the Bichon is now one of America’s most beloved pooches.

Are Bichon Frises Playful and Fun?

If Bichons had middle names, it’d definitely be “playful” and “fun.”

Bichons are not only very intelligent, but also very curious.

They’ll sniff around the house, and try to take a bite out of anything within reach — electric cords, footstools and plastic children’s toys.

So if you don’t want your pooch to take a last-minute trip to the vet, better “Bichon-proof” the house.

Also, you’ll want to keep an eye on your Bichon whenever he’s not on a leash.

He’s a naturally adventurous dog, so if he sees that the front door is open by even a few inches, he’ll make a dash for it in a heartbeat.

Luckily, you can avoid any untoward incidents by training your Bichon to “Sit” and “Stay.”

How Much Exercise Does A Bichon Frise Need?

Bichons aren’t couch potatoes, but they’re not as athletic as greyhounds either. At most, they only need a moderate level of exercise.

If you want your Bichon to stay fit and healthy, give him a brisk walk for 20 to 30 minutes each day.

You can also give him plush toys to chew on, puzzle toys to solve, and other forms of mental stimulation.

Keep in mind that individual Bichons have different exercise needs, depending on age and fitness level.

For example, Bichon puppies, whose muscles and bones are still developing, shouldn’t be exercised as much as their adult counterparts.

Bichon puppies should be exercised for about 2 to 5 minutes a day at most.

As they get older, you’ll need to add another 2 to 5 minutes for every month they age.

Ramp up your Bichon’s exercise requirements as needed, but don’t push them to the point of exhaustion.

Once they show signs of exhaustion like excessive panting, stop and give them a sip of water or two.

What are the Grooming Needs of the Bichon Frise?

Unless you’re a skilled and dedicated groomer yourself, it’s better to take your Bichon to a professional at least once every 4 or 6 weeks.

Although Bichons don’t shed much, their puffy fur is prone to matting and tangling, which can cause skin infections if not removed.

Also, if you don’t know how to brush a Bichon the right way, you might not be able to maintain your pooch’s cloudlike looks.

That said, there are a few things you can do for your Bichon’s upkeep. You can:

Check your Bichon’s ears for signs of infection, like wax buildup, redness and foul odor. If you notice any of these, bring your dog to the vet ASAP.

Look out for tear stains, mucus and other signs of infection around your Bichon’s eyes. Ask your vet about these as well.

Brush your Bichon’s teeth at least once every other day. Use a dog-friendly toothbrush and toothpaste, and thoroughly remove any tartar buildup inside his mouth.

In case you’re not sure about how to groom a Bichon Frise, ask a professional for pointers or look up tutorials online from reputable sources.

Are Bichon Frises Easy to Train?

If you’re looking for a dog that’s easy to housebreak, the Bichon is not the breed for you.

They need to be trained as early as possible, and with as much consistency and patience as you can muster.

The easiest way to housebreak a Bichon is to do it in conjunction with their potty training. Basically, it goes like this:

Let your Bichon sleep in a crate.

In the morning, take him outside or to a place where it’s safe for him to urinate/defecate.

If he “lets go” while in the designated area, let him know he did a good job by praising him (“Good boy!”) or giving him a treat.

Gently guide your Bichon back into the crate to sleep.

When he’s awake, take him outside to play for a certain amount of time (e.g. 15 minutes).

Once the 15 minutes or so are up, take him back into the crate to sleep.

Rinse and repeat these steps.

Again, it’s important to be consistent when training a Bichon Frise.

If possible, set a fixed daily routine for your pooch.

The more consistent your Bichon’s routine is, the less likely he’ll have any “accidents” along the way.

How Much Does a Bichon Frise Puppy Cost?

Aside from the puppy itself, you’ll also want to account for the annual costs of keeping a Bichon.

Some of these costs include regular checkups, grooming, food, toys and supplies.

All in all, these can add up to a few thousand dollars per year, assuming you’re giving your Bichon only the barest necessities.

Bichons are definitely one of the cutest dogs around.

They have great looks, great personalities and a good head on their shoulders (at least, most of the time). What more can you ask for in a dog?