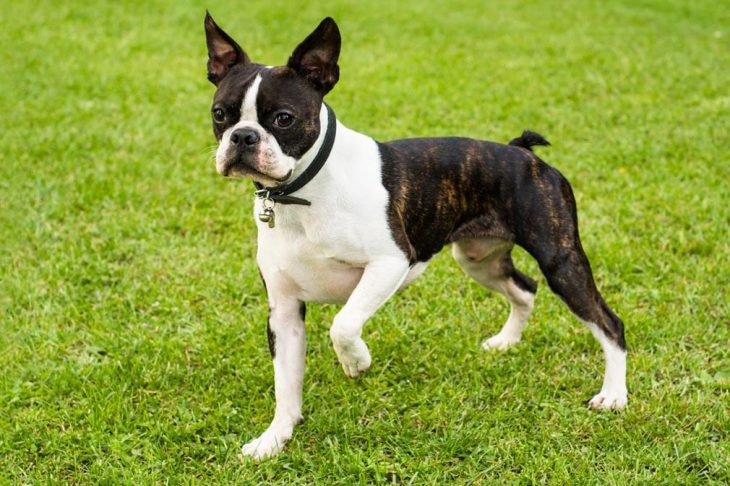 Boston Terrier Breed: What You Need to Know About This Dog

Want a “gentleman” who can let loose? If so, you can’t go wrong with the Boston Terrier.

Recognizable for its tuxedo-like fur (earning it the nickname “American gentleman”), the Boston Terrier is an all-American breed that can bring laughter and love into any household.

Its outgoing personality and high intelligence have captured dog lovers’ hearts since its inception. But can this pooch capture your heart? Read on to find out.

A Basic Overview of the Boston Terrier Breed

It’s easy to spot a Boston Terrier from a mile away.

White fur covers the area between its eyes, around its muzzle and neck, down to its chest and parts of its legs.The rest of its body comes in a dark color — either black, brindle or seal — which caps off the breed’s distinct gentlemanly look.

True to its bulldog-terrier origins, the Boston Terrier has a square head, short and wide muzzle, erect ears and a compact but powerfully-built body.

It leans on the small side, reaching only up to 15 inches (38 cm) in height, and can live for up to thirteen years if properly cared for.

What is the Personality of the Boston Terrier?

Just like their human masters, Boston Terrier personalities can differ from pooch to pooch. Some of them are bouncing balls of energy, while others are a bit more mellow.

In general, however, Boston Terriers love to exercise and get attention above all else.

If you don’t mind playing games with your dog at least once a day, you probably won’t mind a Boston Terrier.

Luckily, you don’t have to play to the point of exhaustion: Boston Terriers are incredibly sensitive to the moods of their owners, so if you slow down, your pooch will too.

Although Boston Terriers can be housetrained to deal with new family members (like babies and other pets), they can be wary of dogs they don’t know.

But don’t be alarmed if your Boston Terrier starts putting on a show as soon as it spots another pooch on the street. They rarely, if ever, display aggression towards other dogs.

Because of its size and (generally) lively personality, the Boston Terrier makes an ideal pet for those who don’t have enough room for a big dog but need a little more sunshine in their lives.

The breed is also very intelligent and trainable, so don’t worry about its extra energy spiraling out of control.

History and Background of the Boston Terrier

Believe it or not, the Boston Terrier was originally bred as a fighting dog. A cross between the English Bulldog and the now-extinct English White Terrier, the breed first showed up in Beantown between 1860 to 1870.

By 1893, the breed became so popular with folks from Boston and beyond, it was finally admitted into the American Kennel Club — the first U.S. breed to have done so.

Other firsts for the Boston Terrier include being one of the first dog breeds, and being the first non-sporting dog, to have originated from the United States.

As you can imagine, Boston Terriers used to be aggressive, and not in a good way. Fortunately for us modern dog lovers, the breed eventually mellowed out, shifting its energies from jumping on other dogs to jumping up-and-down on your bed.

Are Boston Terriers Playful and Fun?

Absolutely. Despite its reputation as the “American gentleman,” this pooch is no prude. As Charmed actress-slash-Boston Terrier fan Rose McGowan put it, “Boston Terriers are complete clowns.”

If you look up “funny dogs” on YouTube, chances are a few of them are Boston Terriers. Aside from the tricks you teach them, Boston Terriers have a whole bunch of antics up their paws.

For one, because of their facial structure, Boston Terriers have a tendency to snort and grunt. They also tend to be gassy, making for hilarious moments that you may want to capture on tape.

Overall, Boston Terriers will do anything to put a smile on your face. They’ll jump on your bed and “kiss” you, stand on their hind legs like the true gentlemen they are, and give you plenty of reasons to whip out your camera and make the next viral sensation.

How Much Exercise Does a Boston Terrier Need?

As a breed with roots in Beantown, the Boston Terrier is naturally suited for city living. It doesn’t really mind small spaces like apartments, as long as you’re able to give it the attention and exercise it needs.

Like most dogs with short noses (e.g. bulldogs), Boston Terriers are prone to overheating.

If you notice signs that your dog is feeling the heat — like dizziness, excessive drooling or a dark-colored tongue — bring him to a cool, shaded area and have him drink water.

If he or she doesn’t seem revived, take him to the nearest veterinarian as soon as possible.

On the other hand, Boston Terriers aren’t down for cold weather either. Because of their short hair, they need more insulation on chilly days, so remember to bring a pooch sweater if you’re having a walk during the fall or winter seasons.

If you want to get your pooch moving, try keeping it to about a mile a day at first, then gradually increase the distance over time. That way, you’ll have a better feel for how far you can push your dog.

Of course, talking to a vet is still your best bet for knowing how much exercise your Boston Terrier needs.

What are the Grooming Needs of the Boston Terrier?

Being short-haired, the Boston Terrier is a relatively low-maintenance breed. Even if your pooch somehow gets mud all over himself, wiping him down with a damp towel is enough to make him look dapper again.

You also don’t need to bathe a Boston Terrier too often. In fact, it’s better to bathe your pooch only when necessary, because washing him too much will strip his fur’s natural waterproof coating.

If you do wash him, make sure you use only mild shampoos or similar solutions.

You do want to brush your pooch’s fur once in a while. Use a natural bristle brush, gently brush his fur in the direction of hair growth, and take care not to let the bristles rub too close to his skin.

You’ll also want to check his teeth for tartar. Like humans, Boston Terriers need to have their teeth brushed regularly. For this pooch, you can use either a baby toothbrush slathered with a dog toothpaste or a wet washcloth.

Don’t forget to keep an eye out for his eyes and ears as well. Use a wet but warm cloth to wipe any eye discharge, rubbing towards your pooch’s cheeks. Do the same for the ears, but be careful not to get any water down the ear canal.

As for the Boston Terrier’s nails, they can be rather difficult to file. Unless you’re 100 percent sure of your filing skills, better let a professional groomer do it for you.

Are Boston Terriers Easy to Train?

On one hand, Boston Terriers are very intelligent, but they can also be very stubborn, which can make training challenging if you’re an inexperienced owner.

Like most dogs, Boston Terriers respond well to positive but assertive reinforcement.

For example, when you’re crate training your pooch, make sure to use a comfortable crate for them to “come home” to, lure them in with treats, and avoid getting frustrated if they’re not responding the way you want them to.

You may have also heard that housebreaking a Boston Terrier can be challenging. The easiest way to go about this is to train your pooch as early as possible. The sooner they learn that your carpet isn’t a toilet, the better.

When teaching a Boston Terrier new tricks, it’s important to be patient. Start with basic commands like “Sit,” “Stay” and “Heel.” Teach one command at a time.

Repeat the command as many times as necessary but not to the point that your pooch gets discouraged from having to do the same thing over and over again.

As with the other tasks above, don’t forget to treat your furry friend for a job well done.

How Much Does a Boston Terrier Cost?

On average, expect to shell out anywhere between $600 to $800 for a Boston Terrier puppy.

That’s assuming you’re not looking for a show dog, and that you’ve done all the necessary paperwork related to breeding rights. For show quality dogs, prices can range between $1,500 to $4,500 and possibly higher.

Because Boston Terriers are more prone to certain health issues, like stomach disorders and breathing problems, vet bills can ramp up the cost even further.

Smart. Funny. Lovable. What more can you ask for in a pet? If the aforementioned qualities sound like a match for you, consider getting yourself a Boston Terrier.