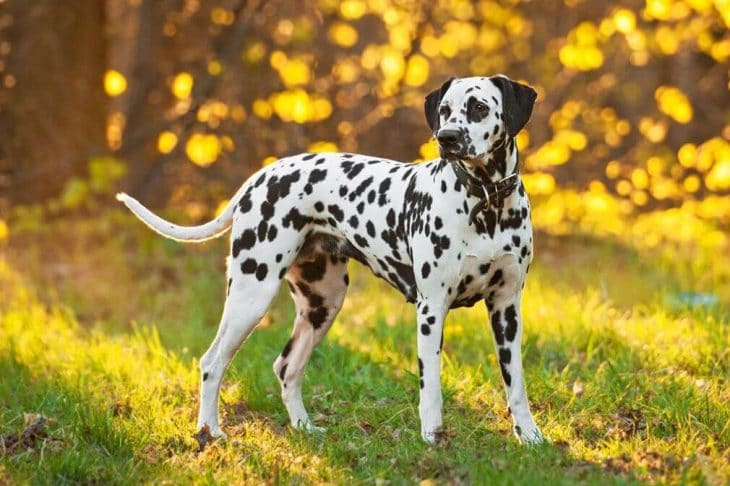 The Dalmatian: The Most Famous Dog Breed In The World

Is it white with black spots, or black with white spots?

Whichever you believe, one thing's for sure: You can never not recognize a Dalmatian.

Possibly made famous by the 1961 Disney film, 101 Dalmatians, the Dalmatian is a bright, bubbly and beautiful pooch that'll bring lots of love and sunshine into your life.

However, this dog isn't for everyone. Before you take one home, here's what you need to know about the Dalmatian.

A Basic Overview of the Dalmatian Breed

Looks aren't the only unique feature of this breed.

When Dalmatian puppies are born, they don't have spots right away. Instead, they're stark white until they're four weeks old, contrary to what the Disney movies suggest.

Also, they've racked up quite a number of nicknames over the years, like "carriage dog," "English coach dog," and "firehouse dog."

As those nicknames suggest, the Dalmatian is one versatile pooch. It's served as a hunter, retriever, circus performer and — most notably — Disney star.

Dalmatians are intelligent, athletic dogs that go well with owners who can keep up with their seemingly boundless amounts of energy. If you want a pooch who's game for sports like Frisbee and flyball, the Dalmatian is a great choice.

Assuming they're properly socialized, Dalmatians are capable of getting along with other pets and children. They can (accidentally) knock down six-year-olds though, so keep a close watch if you have babies and toddlers in the house.

That said if your Dalmatian is properly cared for, exercised, and trained, he can make a lovely and lively companion who'll endear himself to your family in no time.

What is the Personality of the Dalmatian?

The Dalmatian is a lot of things, but "couch potato" isn't one of them.

This pooch needs to be on its feet at all times, so you'll have to give him something to keep his paws (and teeth) occupied. If he can't come along on family trips, you can at least take him with you on morning walks.

Because they're highly intelligent, Dalmatians are naturally curious about the world around them. They'll sniff around your house for no apparent reason and will do whatever they can to catch your attention — whether by alerting you to strangers or playing pranks.

Dalmatians are extroverts through and through. They're very eager to please, and if they notice that a particular trick makes you laugh out loud, you can bet they'll keep doing that trick over and over again.

Not all Dalmatians are as fun and easy, though. Because of improper breeding practices, some members of this breed can be a tad more hyperactive and aggressive than you'd like.

Luckily, you can easily avoid these problems by making sure that you're dealing only with reputable breeders.

You can also nip any behavioral issues in the bud by socializing your Dalmatian puppies as early as possible.

History and Background of the Dalmatian

No one really knows where this breed came from.

What we do know is that spotted dogs tagged along with the Romani people during their travels throughout Europe. One of their stopovers was a province called Dalmatia (in what is now Croatia), which eventually gave its name to the breed.

Throughout history, Dalmatians took on the role of guard, hunter, circus performer, retriever and just about every job a dog can do.

Despite Dalmatians being a relatively ancient breed, it wasn't until 1890 when the standard for the Dalmatian was established in England. They continued to be used for a wide variety of roles, including as coaching dogs and as escorts/mascots for firefighters.

After the release of the 1956 novel, 101 Dalmatians, and the similarly-named Disney movie five years later, the breed skyrocketed to fame. Today, the Dalmatian continues to be beloved as a pop culture icon and family pet rolled into one.

Are Dalmatians Playful and Fun?

They're so playful, in fact, that you'll want them to calm down once in a while!

Having served in the circus at one point, the Dalmatian is a natural performer. You can groom him for any sport that makes use of his high levels of agility, such as contact obstacles, tunnels, and jumps.

Even if you don't actively train them for the circus, Dalmatians are always up for fun. Whether you ask them to or not, they're going to get into your car as soon as they realize that you're about to go on a long family trip without them.

With a Dalmatian in the house, you'll never have a single boring day. If you love dogs and are a generally peppy individual, this pooch will suit you just fine.

How Much Exercise Does A Dalmatian Need?

As former coaching dogs, Dalmatians are capable of traveling several miles per day. Now that horse-drawn carriages are a thing of the past, you'll need to give your pooch some other outlet for his high energy levels.

Unfortunately, short walks aren't enough to satisfy this pooch's exercise needs. For an adult Dalmatian, you'll want to set aside at least an hour a day to help them let off steam.

You'll also want to give them enough space to run around since their size and strength can knock down a flower pot or two.

Of course, you'll want to spice things up for your Dalmatian once in a while. Give him a ball or Frisbee to catch. Take him to dog-friendly places where he can run as much and as far as he wants.

Better yet, let him tag along whenever you need to do a bit of running or jogging on your own.

What are the Grooming Needs of the Dalmatian?

Dalmatian coats are pretty easy to clean. Their fur naturally repels dirt, keeping them fresh and clean even after rolling in the mud.

On the other hand, their fur tends to shed all year round. You can minimize shedding by brushing them regularly with a soft rubber curry brush.

By doing so, you won't have to bathe your Dalmatian more than three or four times a year.

Much like humans, Dalmatians need to keep their pearly whites clean. Use a dog-friendly brush to brush their teeth at least once a day. Doing this will lower your pooch's risk of developing gum diseases and other oral problems.

Their nails also need to be trimmed once in a while. If you can hear their claws clicking against your floor every time they run, that's usually a good time to bring out the clipper.

You can clip their nails once a month or once every two weeks, depending on how fast their claws grow.

Don't forget to clean out their ears too. Wipe their ear canal with a cotton ball soaked in a gentle, pH-balanced solution to keep infection at bay.

If you spot any signs of ear infection such as bad smells, contact your vet as soon as possible. 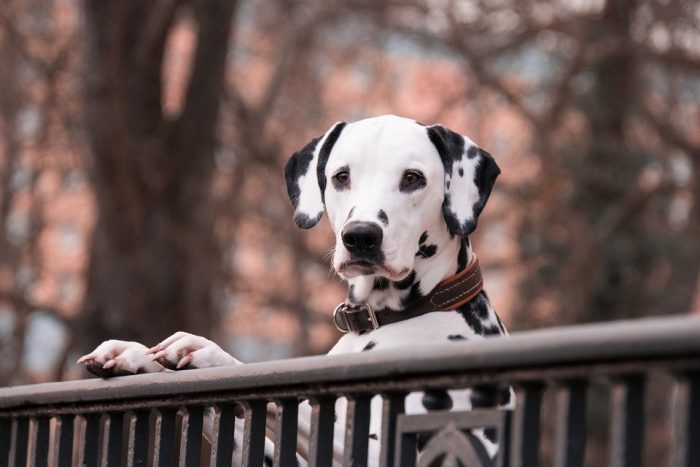 Are Dalmatians Easy to Train?

Dalmatians are inquisitive, fast learners who are eager to please, making them highly trainable. They thrive on lots of activity, games and all-around fun.

However, like most smart pooches, Dalmatians will pull one over you if you're not careful. You have to show them that you're confident, consistent and firm in order for them to recognize you as their pack leader.

But you don't want to be too hard on them either. Dalmatians are known for never forgetting harsh treatment, so if you get angry with or hit them, they won't be as receptive to your training as you'd like.

The key is to balance firm training with positive reinforcement. Be patient with them when they do something "wrong," but be generous with praises and rewards when they get something right.

As with most dogs, the earlier you begin training, the better. Dalmatians are never too young to learn.

If you discourage them from chewing on the sofa as soon as they're a few weeks old, they'll know better than to do the same thing again in the future.

How Much Does a Dalmatian Puppy Cost?

Of course, it's a few hundred dollars lower for pups that don't have papers, breeding rights or show quality. Considering the

Dalmatian's history with improper breeding, however, we strongly advise against buying from breeders with a less-than-stellar reputation.

Overall, Dalmatians are happy, hearty pooches who are up for almost any task you give them. Keep them healthy, keep them safe and you'll enjoy the benefits of a well-bred, properly-cared-for dog for the next decade or so.