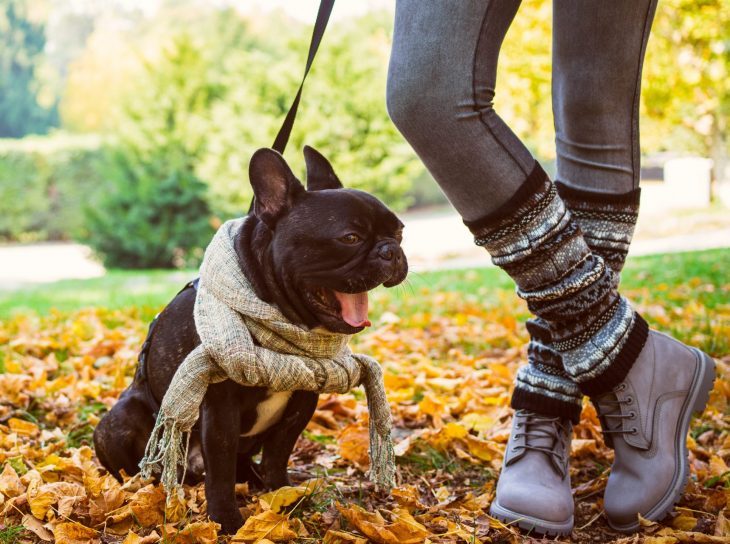 If you don’t think bat ears and flat faces are adorable, the French Bulldog might just change your mind.

Also known as “Frenchies,” French Bulldogs are proof that you don’t have to be a conventional beauty to stand out.

All you need is a fun personality, a somewhat independent streak, and a genuine love of people — just like the pooch we’re about to discuss below.

A Basic Overview of the French Bulldog

Aside from their bat ears, Frenchies have plenty of other things going for them.

For one, their small size means they can fit right in with apartments and similar spaces. They also have very soft barks, which is great if you want to stay in your neighbors’ good graces.

Frenchies are literally a colorful bunch, coming in various combinations of black, brindle, fawn and sable. They can reach up to 12 inches (1 foot) at the shoulder, weigh anywhere between 16 to 28 pounds, and live from 12 to 16 years of age.

Being true-blue urbanites, French Bulldogs are at their happiest when they’re around “their” human.

Whether they mean to or not, they’ll always find ways to put you in a good mood when you’re around them. It’s no wonder, then, that these dogs currently rank fourth on the American Kennel Club’s (AKC) 2017 most popular dog breeds list.

What is the Personality of the French Bulldog?

“Easygoing” is one way to describe a typical Frenchie. As soon as he gets his paws on your couch, he’ll be snuggling into it faster than you can say, “Down, boy.”

He’s not always lazy, though. If he feels like it, he can be playful and mischievous given the opportunity. (Just ask anyone who’s ever uploaded a funny video/made a meme out of a Frenchie’s face.)

Frenchies can get along with just about anyone, including little children. But be careful not to let him see you with other dogs. He’ll only be too happy to tell the other pup to back off!

Related: What Is The Price Of A Pomeranian?

Despite his possessive tendencies, the Frenchie is no guard dog. His barks aren’t very loud, so you won’t be immediately alerted to any unwanted intruders.

On the other hand, low-volume barking means you’re less likely to be showered with complaints from the neighbors. If you have a Frenchie, and you live in a secure apartment complex or condominium, his guarding abilities (or the lack thereof) shouldn’t be much of a problem.

History and Background of the French Bulldog

Despite their name, Frenchies actually came from England. They’re related to the English Bulldog, which was bred as a toy dog for Nottingham’s lace workers around the 19th century.

When the Industrial Revolution occurred, some of these lace workers moved to France, taking their dogs along with them. The French were so captivated by the pooches, they started requesting puppies in droves. Many of the requesters happened to be members of high society, and soon the breed became a status symbol.

By the late 19th century, Frenchies made their way across the Atlantic into the U.S. There, like their European counterparts, Frenchies caught the attention of the likes of J.P. Morgan and the Rockefeller families, which further reinforced the breed’s association with the rich.In 1912, the American Kennel Club officially recognized them as separate from the English Bulldog. At that point, they had earned the name “French Bulldog” before eventually becoming the loveable, unconventionally charming pooch we know today.

Are French Bulldogs Playful and Fun?

As laid-back as they are, there’s a reason French Bulldogs are also known as “clown dogs.”

When they’re not taking up their share of the couch, they’re probably coming up with all sorts of ways to make you laugh.

They’ll mimic any sound you want them to mimic, roll over and show off their beautiful bellies, and make the most hilarious facial expressions.

Being tiny bundles of joy, Frenchies are ideal companions for little kids (and for parents who don’t want to worry about said kids getting knocked over).

You may still want to supervise your pooch around your children since sharp teeth and soft baby skin don’t exactly go together.

Overall, Frenchies are a great mix of cool and collected. If you’re looking for a dog that knows when to hit the sack and when to party, look no further.

How Much Exercise Does A French Bulldog Need?

If you’re not the sort who likes to hit the gym, no worries: The French Bulldog is more than happy to accommodate your laidback lifestyle.

At most, Frenchies need only a moderate amount of exercise. A daily trip around the block will suffice, though the young ones may be a bit more energetic than their adult counterparts.

If you have an over-enthusiastic Frenchie pup, give him time and space to run around your yard. You can also do indoor exercises if you don’t have a yard (provided you clear out the furniture first!).

Regardless, make sure your Frenchie gets a good dose of Vitamin D every now and then.

Even with pups, you don’t want them to overexert themselves. If your Frenchie is panting too loudly or showing other signs that he can’t take the heat anymore, give him some cool water right away.

Bear in mind that your pooch’s exercise needs will vary according to personality, as well as age. Pay close attention to your Frenchie, watch out for signs that they’re getting bored (like chewing on your slippers), and invite them out for a quick walk.

What are the Grooming Needs of the French Bulldog?

Because they have short coats and don’t shed very often, French Bulldogs are fairly easy to groom. You only need to brush them about once or twice a week to keep their coat soft and smooth.

When you do brush them, make sure to watch out for signs of skin infections like lesions, flakes, and scabs. If you spot any of these, take your Frenchie to the vet as soon as you can. Other red flags to watch out for are smells or discharge coming from the eyes, ears and mouth.

To prevent ear infections, clean your Frenchie’s ears regularly with a soft, damp cloth. Do the same for the eyes and face. Take care not to stick anything directly into sensitive parts, like the inside of the ear canal, nostrils and eyeballs.

Clean their teeth regularly as well. Use a brush and toothpaste specially made for dogs. You can find these in most decent pet stores.

Give their nails a trim every now and then. A good way to tell whether a dog needs their nails trimmed is when they start making clicking noises on the floor. If you’re uncomfortable with this process, you can always take your Frenchie to a professional groomer.

Are French Bulldogs Easy to Train?

On the one hand, Frenchies are pretty smart, easily picking up basic commands like “Sit,” “Stay” and “Heel.” On the other hand, they can also be pretty stubborn. The moment they realize that they can say “No” to you, they’re not going to budge an inch.

That’s why, when you take them home (preferably as puppies), you need to show them who’s boss from the get-go. Be firm and consistent with house rules, but don’t forget to be patient and positive.

Related: All About The Shepadoodle Or German Shepherd Poodle Mix

One of the first things a Frenchie should learn is how to stay in a crate. Since Frenchies love people a little too much, they can suffer from separation anxiety if left alone for too long. If you want them to stay calm when you’re not around, crate training is one of the best ways to help.

You’ll also want to give them a hand with potty training. Frenchies have narrow hips, so they can’t excrete as easily as other dogs can.

Once they show signs of wanting to answer the call of nature (like leaning back on their buttocks for a few seconds), take them outside, let them relieve themselves in the right place, and give them a treat for a job well done.

How Much Does a French Bulldog Puppy Cost?

The cost for a French Bulldog puppy depends on a lot of factors, like where you live, whether the pup comes with papers or not, and how rare the pup’s color is.

For example, let’s say you’re in the East Coast. Assuming you’re fine with common colors for Frenchies like cream, black, and brindle, you can expect to pay between $1,400 and $2,000. For pups with “unicorn” colors like purple or black-and-tan, the price will be much higher.

You also need to factor in the costs of caring for a French Bulldog puppy. At the minimum, if you include food, supplies, trips to the vet and heartworm exams, you’ll probably spend an additional $2,000 per year. In other words, if you want a Frenchie, prepare to fork out a lot of money.

With their fun personalities and crinkly-eyed charm, Frenchies can worm their way into your heart before you know it. If you plan to have one of these pooches, or you already do and want to share your experience, let’s talk in the comments below!