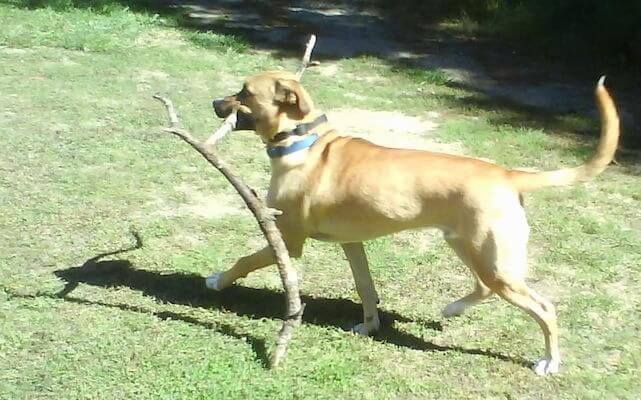 If you are looking into getting a German Shepherd Boxer mix dog, you are in for a lot of fun, companionship, and mischief.

These active dogs are loving and protective of their families, and they will help you get a lot of exercise, as you will need to meet their high need for activity each day.

Designer breed dogs are highly sought-after for their unique ability to have the best of both worlds between two purebred dogs.

However, it is imperative to understand your hybrid dog’s unique needs, temperament, and natural instincts.

In this article, we will go into detail regarding the German Shepherd Boxer mix, their appearance, temperament, grooming needs, training needs, and more.

What Is A Boxer Shepherd Mix?

The Boxer and the German Shepherd both have German ancestry.

Boxers are a relative of the German Bullenbeisser, which is a type of mastiff, and German Shepherds were developed by a German soldier who crossbred local herding breeds.

The result of breeding a Boxer and a German Shepherd is a Boxer Shepherd, which is an attractive dog with a good personality.

These dogs have been around for about thirty years, which is when the trend of mixing two purebred dogs to create a designer breed began.

With this unique mix of purebred dogs, it is helpful that the parent breeds have similar behaviors and temperaments when trying to determine how the puppies will turn out.

What Does A Boxer German Shepherd Mix Look Like?

A resulting puppy from a Boxer and a German Shepherd may take after either parents’ physical appearance.

The parents are vastly different in how they look, so it is hard to tell exactly how a puppy will turn out to look like.

However, most of them end up being large and strongly built dogs.

The puppies could possibly have a darker face marking circling their eyes and mouth, and they usually inherit the floppy ears of a Boxer dog.

Their coat also resembles that of a Boxer mix in that it is usually short, but it is also thick. They can be double-coated like a German Shepherd dog.

While this dog isn’t often described as being “cute,” he is known to be a strong and good looking working dog.

These dogs do not come in a wide variety of colors because both Boxers and German Shepherds are brown dogs. The puppies will be golden-brown in color.

How Big Does A Shepherd Boxer Mix Get?

When it comes to the Boxer size, they grow to be 20 to 25 inches tall at their shoulders and weigh between 60 and 70 pounds.

A German Shepherd size is similar, measuring in at 22 to 26 inches tall at the shoulder and weighing between 75 and 95 pounds.

As a hybrid breed, these dogs weigh between 65 and 95 pounds, depending on their genetics and body shape.

This German Shepherd mix clearly grows to be a pretty big dog, which is something to keep in mind if you are considering adopting one.

Because the parent breeds of this dog have vastly different shedding tendencies, it is hard to say what you will end up with when it comes to grooming.

The German Shepherd parent is a heavy shedder, especially during shedding season, which means if your puppy takes after this parent, he will need to be groomed often.

But, if he takes after his Boxer parent, he will have shorter and more manageable hair.

It is best to regularly brush your dog, whether he has a Shepherd’s thick coat or not.

Related: All You Should Know About The German Shepherd Pitbull Mix

Aside from reducing the amount of hair you will find on your furniture, brushing your dog allows you to have some bonding time with him.

It is also important to bathe your German Shepherd Boxer mix, but you don’t want to do it too often because their skin can be sensitive.

Aim for about once a month, and make sure that you are using a shampoo that is manufactured specifically for dogs.

Because these dogs can have floppy ears, it is imperative to clean their ears every week.

Just lightly wipe each ear down to remove excess dirt to prevent their ears from becoming infected.

There are several favorable attributes that these dogs can inherit, seeing as the parent breeds are both smart, alert, protective, and social.

Both parents of this hybrid are known for their ability to be guard dogs, so you can assume that the Boxer Shepherd mix will inherit this trait.

The Boxer Shepherd mix is extremely intelligent, even when he is just a puppy.

You may notice a lot of goofiness, due to the Boxer temperament, but it is important to realize just how smart this dog is.

As a pet owner, it is your job to socialize your dog to help him become an even-tempered animal.

The German Shepherd temperament will bring out a natural instinct of being suspicious of strangers, but as long as you make sure your dog gets early socialization, you can teach him to not immediately see strangers as being a threat.

As with all dogs, the Boxer Shepherd will appreciate having close interaction with their family members every day.

Because of this, it is best to consider your lifestyle while choosing this hybrid dog, as he will not be happy being alone all day.

How to Train A German Shepherd Boxer Mix

Training a Shepherd Boxer mix can be quite a challenge if you are a first-time dog owner.

Having a smart, large dog with a lot of energy can be quite overwhelming.

However, you can learn how to train a German Shepherd Boxer mix if you are willing to accept and embrace his personality.

His level of intelligence is a positive trait because he is smart enough to learn your commands quite quickly.

However, problems may arise surrounding their attention span because they are quick to turn away from the task at hand.

Related: Your Guide To The German Shepherd Rottweiler Mix

Because of this, doing short and frequent training sessions using a rewards-based system will help your training efforts succeed.

When training your dog, it is important to remember to be consistent and persevere if he is not quite understanding something.

If you are struggling to succeed in your training efforts, online guides can be a helpful option for dealing with this mix.

Socialization practice in dog classes can be helpful for some of these dogs, but it could possibly be overwhelming for the Boxer in your dog, and they might have a hard time keeping up with the class.

Is a Boxer and German Shepherd Mix a Good Family Dog?

One reason these dogs are well-loved by families is that they are both loyal and protective, making them an ideal guard dog.

However, concern over personality traits, such as aggression and high levels of energy can turn some people off from this hybrid.

These dogs’ energy levels, which are largely passed down from their Boxer parent, can be controlled with proper exercise.

However, if you are unable to provide a sufficient amount of activity for your dog, these large dogs can become overly boisterous and even destructive.

Some say that this hybrid dog needs a solid hour-long walk every day, but this should really be considered a minimum.

This is especially a concern for families who have small children or who are often away from home.

There is a chance that your dog will experience separation anxiety if you leave him alone.

A Shepherd Boxer mix could easily knock down and injure a child during the excitement of play time or even just in passing if he isn’t paying close attention.

Socialization can also be an issue for these dogs, but those who are socialized with people and other animals at a young age are much less likely to have trouble as adults.

If you do have children and still want to adopt one of these dogs, make sure that you always monitor your child’s interactions with your dog.

Also, be sure to teach your children the safe and correct way to handle dogs and respect their boundaries.

Remember, this dog can become a bit too playful and can accidentally scare children with his energy.

When it comes to health concerns, there is very little to worry about if you get your puppy from a high-quality, ethical breeder.

These two breeds are generally healthy, so there are not any major concerns. However, they are prone to hip dysplasia, obesity, and allergies.

Make sure to feed your dog a balanced diet of high-quality food to keep him healthy.

It is also important to ensure that your dog gets enough exercise, both for his mental and his physical health.

A happy and healthy dog who is well cared for can be expected to live between ten and thirteen years.

How Much Is A German Shepherd Boxer Mix Puppy?

You have to take additional costs into consideration, such as food, annual medical checkups, a crate, a leash, toys, and a dog license, which all add up to around $1000 per year.

Where to Buy A German Shepherd Boxer Mix

It can be difficult to find high-quality breeders of this Shepherd mix.

A good dog comes from two healthy parents that have been well taken care of. Buying a dog who is unhealthy is not ideal because their lifespan will be reduced and the cost of maintaining the dog will be high due to his health care needs.

Because of this, before buying a German Shepherd Boxer mix, you should obtain a health history of the dog’s parents and their overall behavior.

Having this information is important because it will help you select only the best dog among many.

Look for a breeder who offers this information freely and has a lot of knowledge about the dog’s parents.

Related: All Your Questions Answered About The German Shepherd Lab Mix

A breeder should also offer a health guarantee on their puppies.

A reputable breeder is open and honest about health problems of the breed and the frequency with which they occur.

A health clearance will show you that a dog has been tested and cleared of a certain condition.

If you see an advertisement for a breeder of this particular mix of dogs for sale, go to their home to take a detailed look at the puppies.

Spend enough time with the owners and the puppies to get a good idea of their health history and personalities.

The more information you can get, the more prepared you will be as the dogs reach adulthood.

The Boxer Shepherd can be demanding for your attention at times, but every moment you spend with this dog will be worth the energy.

With the proper training, encouragement, and socializing, this dog will be one of the most loving and unique pets you will have.