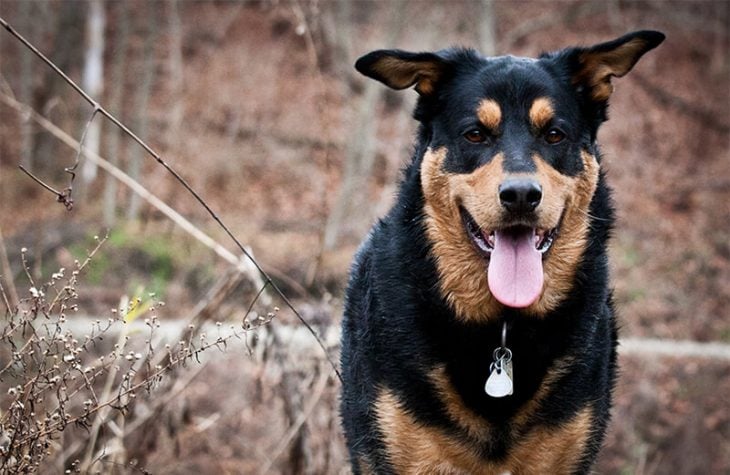 While some people fear that a mix of these two breeds will create an aggressive dog, with correct training, these dogs are excellent companions for the whole family.

Before choosing a Rottweiler Shepherd for your home, you’ll want to learn more about the “Rotten Shepherd” and what you may expect from this breed.

Here, we will take a look at this hybrid’s history, appearance, temperament, needs, and other important information to help you make an informed decision.

There is no concise information noted regarding who bred the first German Shepherd Rottweiler mix or what the goal was when doing so.

However, hybrid dogs have become increasingly popular since the 1980s, and the German Shepherd Rottweiler mix probably originated within that time.

Since we don’t know a lot about the mixed breed, it’s important to learn more about the origin of both the Rottweiler and the German Shepherd.

The Rottweiler, founded in the town of das Rote Wil, descended from a dog similar to a Mastiff that the Romans brought to Germany to drive cattle.

Throughout the years, the original dog was bred with some local dogs to be working dogs.

This breed nearly became extinct at one point, but breeders began to rebuild the breed in the early 20th century, and they quickly became popular in the U.S. after their arrival in the 1920s.

German Shepherds were developed to be herding dogs in Germany.

When the need for herding dogs declined, these dogs remained popular as working dogs with the police and military.

German Shepherds are known for being superior working dogs due to their loyalty, protective nature, and ease of training.

The parent dogs to this hybrid both have distinctive appearances, but different German Shepherd Rottweiler mix dogs may have various builds, face shapes, ears, and coloring.

However, they will all be powerful and stocky, even though they can carry the weight in different ways.

This is a large breed with a strong and powerful appearance, no matter which parent they favor in terms of physical traits.

Since the Rottweiler is a larger breed that can be robust, it can make this hybrid appear to be intimidating compared to other dogs, which is important to keep in mind if your dog’s features resemble more of a Rottweiler than a Shepherd.

Related: All You Should Know about the German Shepherd Pitbull Mix

Their coats vary from being dense, harsh, coarse, straight, medium, and short.

The coloring of a Rottweiler German Shepherd mix can be solid or a mix of black, cream, grey, and white.

They can also inherit a Rottweiler’s mahogany legs and facial marks, or the black face and signature leg markings of a German Shepherd.

The German Shepherd is known to have a “saddleback” look, but this hybrid may or may not have this resemblance.

How Big Does A Rottweiler German Shepherd Mix Get?

A Rottweiler typically weighs more, nearing closer to 80 or 90 pounds, due to its muscle mass — although, the breed tends to be about as tall as a German Shepherd.

You can anticipate that a German Shepherd Rottweiler mix full grown will weigh between 75 and 115 pounds and will stand between 22 and 27 inches tall.

The dense double coat on these dogs makes them prone to shedding, especially when winter turns into spring.

If your dog inherits a medium-length, shaggy coat of the German Shepard, it will be necessary to brush them 3 to 4 times per week, and every day during shedding season.

However, if the dog inherits his Rottweiler parent’s characteristics, you can get by with brushing him just once a week.

It’s always a good idea to brush your dog on a regular basis, regardless of their hair type, because even for dogs who don’t shed a lot, the brushing removes excess hair and dead skin cells that may become itchy for your dog if left untreated.

Keeping up with brushing will also help you handle the amount that your dog sheds.

Related: All Your Questions Answered about the German Shepherd Lab Mix

Regular grooming will help you form a bond with your dog and reduce the amount of hair that accumulates on your furniture.

Bathing is also important for these dogs, but it can be done on an as-needed basis.

Make sure to use products that are made specifically for dogs because shampoo that is manufactured for humans can be harsh on these dogs’ sensitive skin.

You also want to make sure to check your dog’s ears weekly and wipe them down to get rid of any accumulated dirt.

Clip your dog’s nails about once a month or as needed, making sure to not clip them too short.

Finally, make sure to brush his teeth every day to maintain his dental hygiene.

Temperament of A Rottweiler German Shepherd

One important concern among potential owners of these dogs is their temperament.

Especially with this mixed breed, it’s important to realize that breeding a Rottweiler with a German Shepherd can’t guarantee what the temperament of your puppy will be.

Rottweilers and German Shepherds are both known to be aggressive breeds and often carry a bad reputation.

However, like other dogs, a Shepweiler that is well-trained and properly socialized will have a calm temperament and a gentle personality.

These dogs are obedient, intelligent, and loyal, which makes them easy to train if you have the proper skills to do so.

If your Shepweiler feels like you or your family are in a threatening situation, he may become protective due to his loyal nature.

Your dog may also become territorial and want to protect your home if he feels like another animal or person is trying to harm you or your family.

Both parent breeds are known for their guarding tendencies, which is why they can be found working in police departments or in similar security professions.

The Rottweiler German Shepherd mix’s temperament is ultimately shaped by how their owners raise them.

This is a great temperament to have for a dog who lives with a responsible and experienced dog owner.

How to Train A Rottweiler German Shepherd Mix

This hybrid breed is easy to train because of their intelligence and loyalty.

These dogs may tend to be stubborn due to their sense of independence, but with firmness and consistency, you can have great results.

When it comes to training a Rottweiler and German Shepherd mix, some common issues include destructive behavior, herding issues, and socialization.

However, as long as you maintain the dominant role in the relationship, this breed will respect you and listen to your commands.

You should start training your dog when he is still a puppy so he can learn proper behavior at a young age.

This can help your dog get along well with people, other dogs, and children.

If you are able to bring out their best at an early age, you will be setting yourself up for success in the future.

These dogs grow up to become pretty large dogs with a lot of physical strength, which makes it especially difficult to train them as adults.

Is a Rottweiler Shepherd a Good Family Dog?

These are true guard dogs, and if trained correctly, they can be great family dogs.

However, if you have small children in your family, you may want to wait until they are older to get one of these dogs.

The size of the dog itself may intimidate your small child and you may want to wait until you have the time to spend.

Giving your dog a significant amount of your time and attention for training and exercising before adopting him.

That said, if your family tends to be sedentary and doesn’t have a yard to play in, these dogs can become restless and bored and become mischievous.

If your family is active and has experience with dogs, this can be the perfect addition to your family.

They are loving dogs that will also help keep your family safe.

With a lot of positive reinforcement, this loyal breed can form a strong bond with every member of your family.

Health Concerns for the German Shepherd and Rottweiler Mix

These dogs often suffer from elbow and hip dysplasia. Due to their higher weight, they can put excess stress on their joints, which increases their chances of suffering from arthritis.

This breed is also deep-chested, which can lead to bloating.

Other health concerns include cancer, sensitive skin, and autoimmune diseases.

If you want to make sure that your dog is healthy, consider getting genetic testing done to find out if there are any health issues that run in the family.

How Much Is A German Shepherd Rottweiler Mix Puppy?

You want to make sure that you aren’t paying an especially low price for your dog, because you often get what you pay for, especially if you purchase from a puppy mill or unprofessional breeder.

Where to Buy A German Shepherd Rottweiler Mix

When looking for German Shepherd Rottweiler mix puppies, you will want to find a reputable breeder so you can learn about the puppy’s parents’ health history and temperaments.

You’ll want to have this information to handle such a large dog that is prone to medical issues.

Avoid buying a Rottie Shepherd puppy if his breeder doesn’t have a certification from the Orthopaedic Foundation for Animals for both of the dog’s parents or if there are multiple hereditary diseases in the parents’ families.

The Rottie Shepherd is a strong and stoic breed that can become the perfect companion for a good family.

While they have stubborn tendencies and can be headstrong, with the right training, they can steer away from those natural instincts and become a loving friend.

Before adopting one of these dogs, you’ll need to make sure you have enough time and the dedication that is needed to commit to obedience lessons and daily exercise.

Ultimately, if you love large dogs and you can give your dog the attention that he needs, this might be the perfect pet for you.