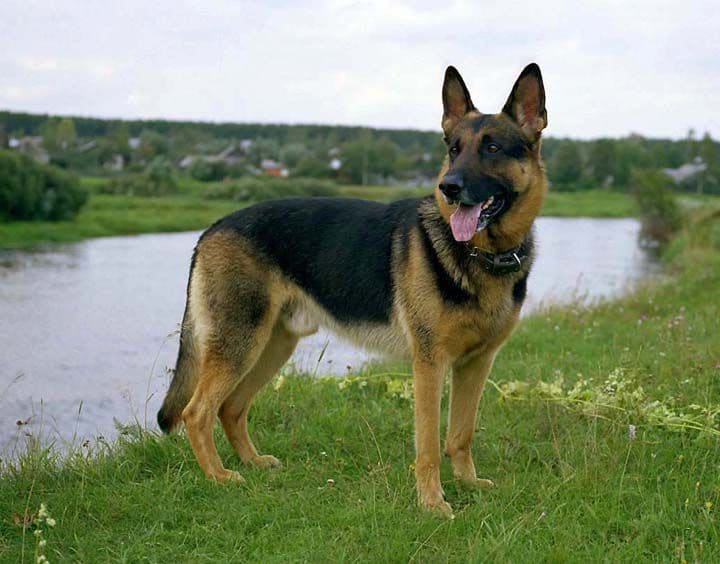 Ask any dog lover to name their top ten smartest breeds, and chances are the German Shepherd will be near the top of the list.

Beautiful, trainable and adaptable, the German Shepherd can handle almost anything you throw its way.

Whether you’re a policeman looking for a trusty partner or a civilian who wants to ramp up your home security, here’s what you need to know about the German Shepherd.

A Basic Overview of the German Shepherd

There’s a reason — or rather, reasons — German Shepherds are so closely associated with policemen, the armed forces, and search-and-rescue groups.

Equipped with 225 million scent receptors, German Shepherds are capable of tracking down hard-to-find targets such as land mines and people trapped under several feet of debris.

Once they get hold of a scent, they won’t stop tracking until they find the source — a handy quality for search-and-rescue operations when time is of the essence.

German Shepherds have one of the strongest bites in the dog world.

On average, they exert up to 238 pounds of bite pressure, second only to the Rottweiler’s 328.

This makes them useful for tasks like capturing criminals who might otherwise make a quick getaway. It also helps that German Shepherds get pretty big.

They usually come in tan-black or red-black color combinations, though you may occasionally find pure black/white versions as well.

German Shepherds can live for nine to thirteen years.

They’re a generally healthy breed (unless you buy the ones from unscrupulous breeders), and are known for their protectiveness towards their family members.

They don’t easily warm up to strangers, which makes them excellent guard dogs.

Despite their size and double-coated fur, German Shepherds can adapt to almost any environment.

As long as they have space to stretch their limbs and move, these dogs will be happy campers.

What is the Personality of the German Shepherd?

Contrary to what you might’ve guessed from their profile, German Shepherds are quite aloof.

They’re not the sort to jump on people and lick them in the face.

However, what they lack in friendliness, they more than make up for in protectiveness.

Strong, self-assured and fearless, German Shepherds will defend against anything they perceive as a threat to their family.

Sometimes, German Shepherds won’t distinguish between “threat” and “guest/visitor,” so it’s important to socialize them with as many people as possible, as early as possible.

That’s not to say that the German Shepherd is naturally aggressive.

Assuming you buy from a reputable breeder, your pooch should be even-tempered and have little to no behavioral issues.

Like most large dogs, German Shepherds have energy levels that are directly proportionate to their size.

This pooch needs a lot of room to move around: That tail alone can knock down a Ming vase!

German Shepherds can live in almost any kind of house. However, you don’t want to leave them alone for too long.

Otherwise, they’re sure to take out their boredom on your living spaces.

If you want to own one of these pooches, make sure you’re capable of giving them the love, attention, and activity they need.

History and Background of the German Shepherd

As their name suggests, German Shepherds came from Germany.

Their creation is generally credited to Max von Stephanitz, who strongly believed in breeding working dogs.

When he attended a dog show in 1899, he was introduced to the dog Hektor Linksrhein, a product of years of selective breeding.

Von Stephanitz loved Hektor so much that he bought the dog and renamed him Horand von Grafath.

This was founded by Von Stephanitz, and the ancestor of today’s German Shepherds.

By 1926, around 8,000 German Shepherds were registered with the UK Kennel Club.

The breed was recognized for its prowess in World War I and II, though it temporarily declined in popularity due to prevailing anti-German sentiment at the time.

Luckily, the breed eventually regained its good standing, to the point that, by 1993, German Shepherds became one of the U.S. most popular breeds — and it’s been that way since.

Are German Shepherds Playful and Fun?

Even though they’re top-notch police dogs who take their jobs seriously, they’re not afraid to show off their goofy side either.

If you ever feel like letting off some steam, you can always throw a Frisbee their way, and they’ll retrieve it for you in a jiffy.

They will also do their best to turn your frown upside-down.

German Shepherds are capable of making the silliest expressions that you’ll want to turn into viral Internet memes.

Despite their intimidating looks, these giants have a gentle side too.

As fiercely protective as they are, they’re not shy about cuddling with small children.

Although you should never leave your tot unsupervised with a large dog, you can trust a properly-socialized German Shepherd to dote on your kid as much as you do.

How Much Exercise Does A German Shepherd Need?

Being large dogs of the working variety, German Shepherds need plenty of exercise.

With these pooches, it’s easy to tell whether they’re exercising enough or not.

If they start ripping into your sofa, are constantly barking for no apparent reason, and/or trying too hard to get your attention, that’s a sure sign that your pooch needs to get moving.

If you’re naturally active and athletic, you shouldn’t have too much trouble keeping up with your German Shepherd’s high exercise needs.

These dogs are always game for activities like hiking, swimming, and Frisbee catching.

But if you live in an area where climbing mountains or diving into pools isn’t an option, no worries: German Shepherds are also up for a brisk jog around the block.

You can also have them look for hidden objects to keep them occupied and make use of their strong scenting abilities at the same time.

However you choose to exercise your German Shepherd, it’s important that he does it on a daily basis, if not more.

Not only will exercise keep your dog fit and healthy, but it’ll also keep any destructive tendencies in check.

What are the Grooming Needs of the German Shepherd?

Having bushy double coats that shed all the time, German Shepherds require lots of TLC when it comes to their grooming.

If you’re going to invest in a German Shepherd, make sure you invest in a de-shedder comb as well.

Give him a thorough brushing at least once a day to minimize shedding, and to keep his coat nice and soft.

Luckily, because of their furs’ natural oils, German Shepherds don’t need to bathe as much as they need to brush.

A rinse every four to five months will suffice, even in the highly unlikely event that your dog will get covered in mud from head to paw.

You’ll also want to clean out his ears and teeth on a regular basis.

German Shepherds have deep ear canals, so you’ll have to be extra careful to spot any signs of infection.

As for brushing their teeth, use a canine toothpaste and toothbrush to keep his pearly whites spiffy.

Do this several times per week, if not daily.

Remember to pay attention to their nails too.

Since German Shepherds have short, black nails, you may want to get help from a professional (who’s been socialized with your dog, of course) to give your pooch a thorough clipping.

Are German Shepherds Easy to Train?

Considering the wide range of tasks they were bred to perform — scenting, retrieving, guarding, herding — how can they not be easy to train?

German Shepherds may be highly intelligent and adaptable, but that doesn’t mean you should completely forego obedience training.

If anything, these types of dogs need obedience training the most, because smart but untrained pooches can turn stubborn pretty quickly.

Therefore, it’s important to socialize them from a very young age. Expose your dog to strange scents and sounds as soon as they’re able to sense these.

Get them used to other dogs, children, and people who are friendly with your family.

Even if you don’t intend to use your German Shepherd for police work and the like, you’ll want to clue your pooch in on the basics.

Give them crate training, so they’ll be used to you leaving for long periods of time.

Get them accustomed to having a leash around their neck, since large dogs can be tricky to rein in once they get going.

Last, but not the least, be patient yet firm when training a German Shepherd.

They may not “get” what you’re teaching them the first time, but that doesn’t mean they won’t get it after a few more tries!

Once your pooch does what you want him to do, shoot him a tasty snack or two.

How Much Does a German Shepherd Puppy Cost?

The reason for this high cost is that it takes a lot to raise one of these canines.

In short, a German Shepard is not a pooch for the budget-conscious.

You may be tempted to buy a puppy from a less-reputable breeder for a few hundred dollars instead.

However, keep in mind that improper breeding translates to puppies with a long list of problems, so think carefully about trading off quality for the price.

German Shepherds are as intelligent as they’re fearless and as playful as they are reserved.

Before you purchase one of America’s most iconic canines, read this guide and consult with a reputable breeder to determine if the German Shepherd is the right dog for you.

All About The Shepadoodle Or German Shepherd Poodle Mix1 Total Shares