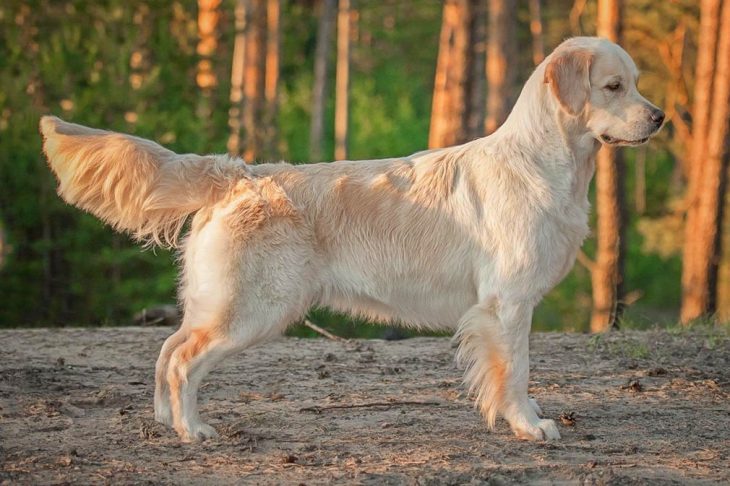 The Golden Retriever is a ball of sunshine, in more ways than one.

Not only does he have sun-colored fur, but he also has the personality, energy, and charm to match.

Combined with his natural intelligence and adaptability, it’s no wonder the Golden Retriever is the third most popular dog breed in the U.S.

If you’re looking to have a Golden in the family, read on.

A Basic Overview of the Golden Retriever Dog

Originally bred to retrieve waterfowl, Goldens have since branched out to other tasks meant for working dogs.

For example, they’re one of the most common guide dogs for the deaf and blind.

They also assist in search-and-rescue operations, as well as the detection of contraband items.

Despite being working dogs, the Golden has a gentle, friendly nature that makes them ideal for family pets.

Goldens rarely bark at strangers, which is good if you usually have guests over, but not-so-good if you’re looking for a dependable guard dog.

You’ll also want to carve out lots of space in the house for your Golden.

Don’t give him too much space, though:

This pooch has a knack for wandering off when you least expect him to.

The breed can live between 10 to 12 years, and well-exercised Goldens are generally healthy.

All in all, Goldens are beautiful, loyal, gentle, hardworking and intelligent pooches.

If you’re looking for a fairly balanced combination of the aforementioned qualities, this dog is a great choice.

What is the Personality of the Golden Retriever?

If there’s one word that best sums up this pooch’s personality, it’s “pleasing.”

Sweet and even-tempered, Goldens can be trusted to always put their best paw forward.

You don’t have to worry about a Golden getting aggressive towards strangers.

At the same time, they don’t mature emotionally until they’re about 4 to 5 years old.

As a result, Goldens retain a playfulness that has led some people to call them “everlasting puppies.”

Goldens are good with children; in fact, they’ll even treat your kids as one of their own!

As gentle as these pooches are, however, you’ll want to supervise them around your little ones in case they get too excited.

Also, they’re confident enough to be unafraid to make a fool of themselves.

In spite of their silly antics, you can’t help but love them, because they’re just so unabashedly earnest.

Unless you get a Golden from a less-than-reputable breeder, your pooch should have a temperament that even first-time dog owners can easily handle.

The only thing you’ll have to worry about is whether you’re giving your Golden enough TLC.

Goldens don’t like being left alone for too long, and they definitely don’t like having next-to-nothing to do.

Apart from those, if you can meet their exercise and activity requirements, and if you shower them with lots of love and affection every chance you get, Golden Retrievers are an absolute dream to have.

History and Background of the Golden Retriever

For years, it was believed that Goldens originated from Russian circus dogs, which were brought to Scotland by Sir Dudley Marjoribanks a.k.a. Lord Tweedmouth.

As it turns out, that behalf was only half true.

While Lord Tweedmouth can be credited with the creation of the Golden Retriever dog, the breed’s origins are actually closer to home.

He wanted to produce a dog that had more stamina and power than the retrievers of the time, but also much more gentle, and so the ancestors of today’s Goldens were born.

Are Golden Retrievers Playful and Fun?

The Golden is a “mouthy” breed, meaning they enjoy carrying things in their mouths — whether it’s a soft tennis ball or a rolled-up newspaper.

Throw a Frisbee within their line of sight, and they’ll be sprinting faster than you can say “Fetch.”

Also, they’re some of the biggest goofballs you’ll ever find.

They can wear the most unintentionally hilarious expressions, make the clumsiest movements look cute, turn silliness into an Olympic sport — and still make you say “Aww” no matter what.

If they’re not clamping their jaws around your heels, they’ll probably do it on your shoes, furniture and anything else they can get their paws on.

Playful biting is normal, even for gentle breeds like Goldens.

However, if it’s starting to bother you, consider training your Golden to soften their bites.

How Much Exercise Does A Golden Retriever Need?

As working dogs, Golden Retrievers have high activity requirements. They should be given at least 60-90 minutes each day to get moving.

Considering what Goldens were originally bred for, the best way to keep them busy is to play “Fetch.”

If that’s not enough, you can also take them along when you’re jogging, hiking, swimming or doing any other kind of high-intensity exercise.

Alternatively, you can switch things up by having your Golden do what he does best: hunting.

And if you’re wondering what happens when a Golden Retriever doesn’t get enough exercise, let’s put it this way:

Cleaning chewed-on furniture is much more exhausting than playing “Fetch” for an hour or two.

Also, Goldens are hearty eaters, which means they’re more inclined to get obese.

Unless those extra calories are burned off with regular exercise, it’s highly likely that your pooch will suffer from joint problems (among other things) due to excess body weight.

What are the Grooming Needs of the Golden Retriever?

Goldens shed all year round, especially during the spring and fall seasons.

If you want to keep one of these pooches around, better brace yourself (and your carpets) for a daily shower of golden fur.

Daily brushing of your pooch’s teeth is also recommended.

Using a brush and toothpaste for dogs, gently remove any tartar buildup in your Golden’s mouth.

Give your Golden’s ears a weekly check-up too.

Floppy ears tend to harbor bacteria and fungi, so watch out for any signs of infection (e.g. foul smells, redness).

If you see anything that looks concerning, use a cotton ball soaked in a gentle pH solution to wipe your dog’s outer ears.

Trim your Golden’s nails as soon as they get too long (i.e. they start making “clack, clack” noises every time they hit the ground).

If your pooch gets too fidgety while he’s being trimmed, have a professional groom him for you.

It also helps to train your pooch to be able to handle grooming as soon as they’re old enough.

Are Golden Retrievers Easy to Train?

Absolutely! In fact, the American Kennel Club (AKC) ranks them among their top 11 smartest dog breeds.

Goldens will do anything to make you happy (and get a treat or two along the way), so training them is almost too easy.

Even if you’ve never trained a dog before, or have never had a dog in your life, a Golden will make sure that you’re in good hands.

The first thing you want to teach a Golden is walking on a leash.

Goldens like to go out and explore, so it’s essential that you teach them how to stay put when and where you want them to.

The sooner you get your pooch used to a leash, the better.

They don’t mean any harm by this, but if it starts to become problematic, pull back the thing he’s biting and let him know that “No, that’s NOT okay.”

Other things you may want your Golden to learn include housebreaking, crate training, and basic obedience commands (e.g. “Sit,” “Shake,” and “Heel”).

Once your pooch masters these, you can level him up to more complex tricks.

Whenever your Golden does something good, always praise him and/or give him a tasty treat.

How Much Does a Golden Retriever Puppy Cost?

Because Golden Retrievers are so popular, it’s pretty easy to find breeders who sell them.

Finding good breeders, on the other hand, is a whole different story.

You can get a Golden for $500; however, you’ll have much fewer problems with your pooch if you choose the ones who have papers and/or quality lineage.

As for food, vet bills, de-worming, grooming, supplies and other optional costs, your safest bet is to prepare $1,850 for the first year, and $1,650 for every year after that.

If their beautiful faces, pleasing personalities and incredible intelligence don’t win you over, we don’t know what will!

What do you think about Goldens? Do they live up to their reputation? Sound off in the comments below!