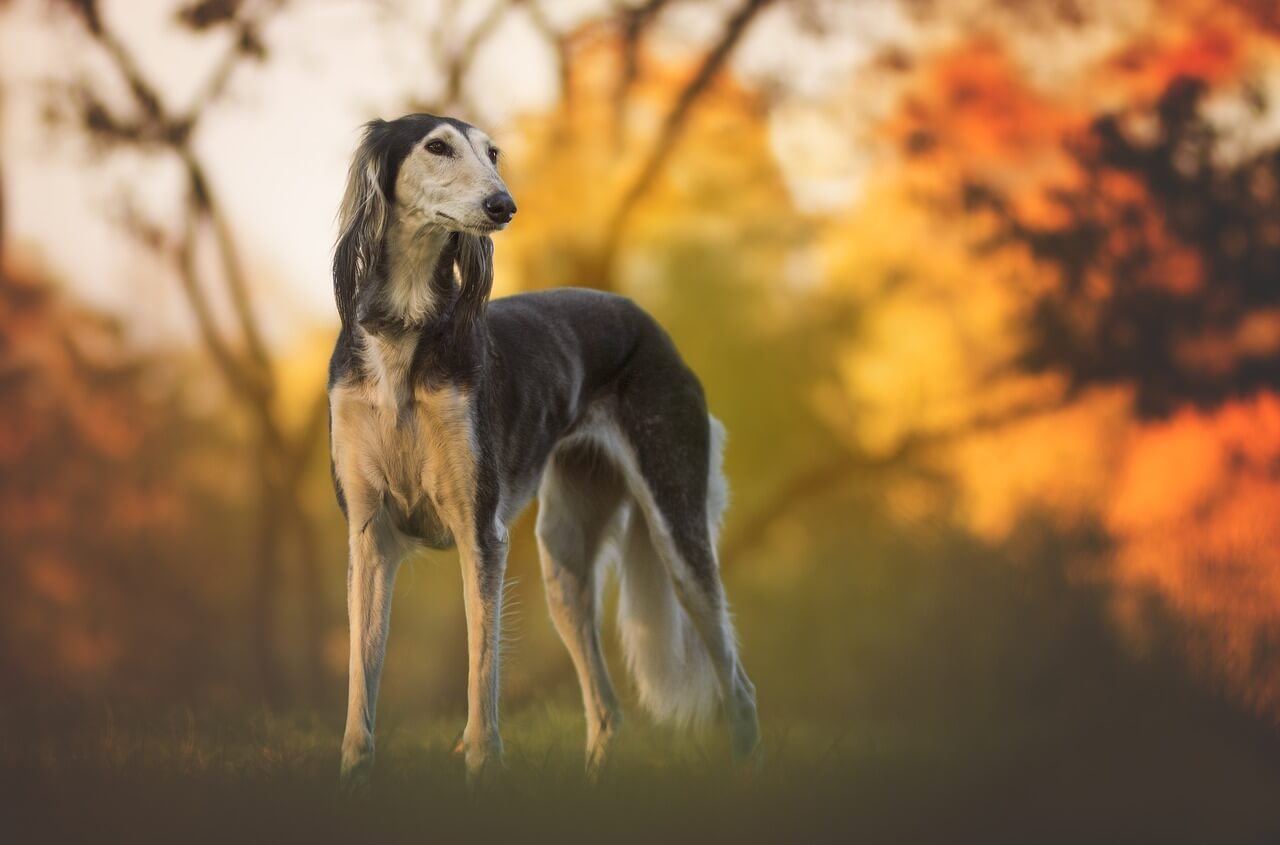 Hear that whooshing sound? That’s a Greyhound speeding by.

Despite their name, Greyhounds are anything but grey (figuratively speaking).

And despite their reputation as racing dogs, they’re not always itching to get on the fast lane.

Even though Greyhounds are well-known, people have a lot of misconceptions about them.

Let’s bust those misconceptions, and get to know the fastest dog breed in the world.

A Basic Overview of the Greyhound

There’s no mistaking a Greyhound. The narrow face, the flexible spine, the powerful legs — all of these help him sprint over long distances.

When he’s not showing off his incredible speed, he spends most of his time relaxing.

Related: What You Need To Know About the Bullmastiff Dog Breed

Contrary to his name, the Greyhound isn’t always grey. He can also be black, blue, brindle, fawn, red, white or a combination of the above.

If you want to buy a Greyhound, consider checking a shelter near you.

Aside from adopted Greyhounds being easier on the budget, you’ll also be giving a home to dogs who are otherwise considered unfit for racing.

Just remember to take a few precautions, as we’ll explain in a bit.

What is the Personality of the Greyhound?

Before they became racing dogs, Greyhounds were hunting dogs.

Their prey drive is so strong that adoption shelters often recommend muzzling them, in case they end up hurting other pets.

But if your Greyhound has already settled in the house, there’s no need to muzzle him 24/7.

Contrary to his reputation as a canine Ferrari, the Greyhound is docile and laidback most of the time.

When he’s not showing off on the racetrack, he’s tucked in a corner getting some much-needed sleep.

When he’s not sleeping, he’s probably being gentle and affectionate towards your family.

With strangers, he can be either friendly or aloof, depending on his individual temperament.

He’s never aggressive, unless he hasn’t been socialized properly, or he’s suffered from trauma that’s caused him to be fearful around people.

Some Greyhound owners say their dogs are almost catlike, since they’re also intelligent and independent.

At the same time, Greyhounds are sensitive dogs, and don’t react well to any negativity in the house.

Before you buy or adopt a Greyhound, do a background check.

Check if he or any of his family members have a history of aggressive behavior.

Chances are, the apple won’t fall far from the tree.

History and Background of the Greyhound

The Greyhound is believed to be the oldest purebred dog.

He’s appeared in Egyptian art, as well as Greek and Roman mythology, and is the only dog breed named in the Bible (Proverbs, 30:29-31, King James version).

From North Africa and the Middle East, the Greyhound spread to Europe during the so-called “Dark Ages.”

At the time, famine and disease almost wiped out the breed.

Fortunately, there were priests who were impressed enough by the dog’s hunting skills to save them from extinction.

Greyhounds also became a favorite of royalty like Frederick the Great of Prussia and Queen Elizabeth I of England.

Their popularity was such that they were brought to the United States, where they became one the first breeds to strut their stuff in dog shows.

Are Greyhounds Playful and Fun?

Some of them are like children on too much sugar, while others are basically four-legged couch potatoes.

If your Greyhound loves to play, he might want a toy or two.

Just make sure that, if your Greyhound’s idea of “play” involves chasing or running, you seal off any place where he can escape and never get back.

If your Greyhound is a couch potato, then there’s no need to worry.

Even though he’s a large dog, he’ll fit in just fine in an apartment, as long as he has space to stretch his legs and lie down.

How Much Exercise Does a Greyhound Need?

There’s a misconception that, because the Greyhound is the world’s fastest dog, he needs more exercise than the average pooch.

Actually, he’s not very physical when he’s off the racetrack.

If you’re worried about his muscles getting flabby, there are things you can do to help him stay fit.

You can walk him around the neighborhood on a leash, let him run around in a fenced yard, or get him to go up and down the stairs.

Related: The Complete Overview Of The Chihuahua Dog

Ideally, a Greyhound should be exercised according to his age.

If he’s not yet 3 years old, he’ll want to get his legs up and running, so give him a safe space to practice his sprinting skills.

If he’s a “senior citizen,” he isn’t likely to want to run like his younger counterparts.

In any case, your Greyhound should be supervised if he’s going to do anything that involves running or sprinting.

The last thing you want is an extremely fast dog running towards a place where you can’t follow him.

What are the Grooming Needs of the Greyhound?

Grooming-wise, the Greyhound is pretty easy. His coat is short, smooth and doesn’t give off the usual doggie smell.

The only thing you need to worry about is constant shedding.

Fortunately, that’s easy enough to deal with: Take a hound mitt (or a rubber brush or soft brush), and gently massage his fur with it.

If he does need to be bathed (like when he gets himself covered in mud), use a canine shampoo diluted with 3 parts water.

Lather the solution onto his coat, rinse it off with warm water, and keep rinsing until all the soap residue is gone.

Also, check his ears for infection and/or foul odor.

Trim his nails when they get long enough to make noises on the floor.

Brush his teeth every other day, using a toothbrush and toothpaste specially made for dogs.

Keep in mind that Greyhounds have sensitive skin.

If you’re going to use a flea collar on him, make sure to consult a vet first.

Some flea-killing chemicals can be irritating, or even fatal, to Greyhounds, so be careful when buying flea collars for your dog.

Are Greyhounds Easy to Train?

If your Greyhound is from a shelter, chances are he’s already been crate trained.

In other words, it’s okay to leave him alone in the house even if you’re working all day.

Of course, if you’re concerned about your Greyhound’s safety while you’re away, you might want to hire a dog sitter.

Then again, he might not be housebroken. If you want your Greyhound to “do his business” in your garden and not all over your carpets, you can train him to do so.

Take him outside whenever he’s about to urinate/defecate, say “Good boy!” whenever he defecates/urinates in the right place, and look out for him until he can do everything on his own without a hitch.

Related: Afghan Hound: Everything You Need to Know About this Dog

Generally, Greyhounds are smart pooches. You can teach him basic tricks like “Sit,” “Stay” and “Heel,” or more complex ones like “Play Dead.”

But if your Greyhound is more cat than dog (i.e. he’s got an independent streak), getting him to pass obedience training can be a challenge.

Luckily, you can always get help from a professional trainer in case your Greyhound gets too stubborn.

As long as you do a background check on the trainer before you hire him, your Greyhound should be in good hands.

How Much Does a Greyhound Puppy Cost?

Plenty of factors affect Greyhound puppy prices, like location, breeder reputation, quality of lineage, papers (or the lack thereof) and any health checks conducted on the puppy.

If you’re getting a Greyhound straight from a breeder (as opposed to adopting from a shelter), expect to pay around $1,100 for a puppy.

If the puppy is from an exceptional lineage, you might want to budget twice, thrice or even seven times that amount.

That’s not accounting for the annual costs of caring for a Greyhound.

For food, medical checkups, toys, supplies, training, grooming and other essentials, it’s safe to budget between $500 and $1,000 per year.

If there’s one dog that’s almost perfect, it’s the Greyhound.

He’s gentle, easy to care for, and a loyal companion for life. What more can you ask from man’s best friend?