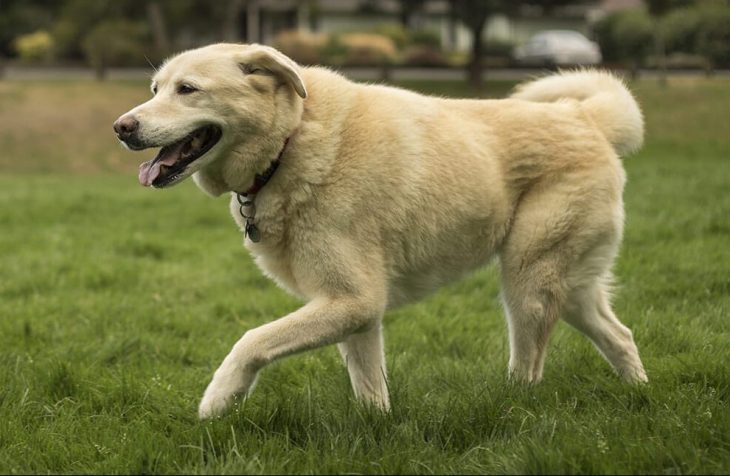 If you love Labs AND Huskies, how are you supposed to pick just one?

Answer: You don’t. You either get both of them or get a dog that takes the best from both worlds.

Curious? Read on for everything you need to know about the Husky Lab Mix.

All About the Husky Lab Mix

What Is a Husky Lab Mix?

Husky Labs go by many other names: Labsky, Siberian Retriever, Huskador, Husky Retriever Mix, Lab and Husky Mix, and pretty much every portmanteau of “Labrador Retriever” and “Siberian Husky” you can think of.

That’s because, as his name implies, the Husky Lab Mix is a hybrid of the Lab and Husky.

Now, it’s important to note that a “hybrid” is not the same as a “mutt.” Mutts have at least one parent who isn’t purebred, and they’re usually born by chance rather than through careful planning.

Hybrids, on the other hand, have two purebred parents of different breeds. For example, a Labsky pup would be the offspring of a purebred Labrador Retriever and a purebred Siberian Husky.

You cannot breed a Husky Lab Mix from two Labsky parents. Otherwise, the result would be a mutt, since both of the pup’s parents aren’t purebred.

Hybrids are also known as “designer dogs,” since they’re bred specifically to inherit the best traits of both parents.

The interesting thing about designer dogs is that they can look like… well, pretty much anything — or, at least, any possible combination of their purebred parents.

A Lab Husky Mix can look more like a Lab or more like a Husky. He can weigh anywhere between 40 to 60 pounds and come in some variation of copper, tan, brown, chocolate, or black-and-white. Depending on the type of Lab his parent was, he can be a Black Lab Husky Mix or Yellow Labrador Husky Mix.

Usually, he has a triangular head. His ears can be erect (courtesy of his Husky parent) or droopy (thanks to his Lab parent). It’s not unusual to see Lab and Husky Mixes that have bi-colored eyes (i.e. one blue and one brown).

At any rate, if you see a dog that looks like a cross between a Lab and a Husky, chances are he’s a Labsky. The only way to be really sure is to look into his background — that is, check if he’s the pup of a pure Lab and a pure Husky.

Hailing from Labrador, Canada, the Labrador Retriever was bred to retrieve ducks and fish. He was particularly helpful to people who needed a dog that was good at catching prey, bringing back said prey alive, and being a good hunter in general.

Indeed, the Lab was born to retrieve. He has a water-resistant coat that makes it easy for him to catch waterfowl. Plus, he doesn’t bark a lot, which makes him perfect for going after easily startled prey.

The Labrador is also smart enough to retrieve prey without eating it before his masters do. He can endure much of the waiting and chasing that comes with the hunt. It also helps that he has a cheerful personality, which can boost any hunter’s or fisherman’s morale after hours of not catching — or even seeing! — anything.

On the other side of the world (or sea, depending on whether you’re looking at a flat map or round globe), we have the Siberian Husky.

Bred in the harsh Russian winters by the Chukchi, the Siberian Husky had strength and endurance in spades. He helped the nomadic Chukchi carry heavy loads over long distances, all while enduring temperatures that plunged below the freezing point. Even today, he’s still the dog of choice for scientists trekking through icy wastelands.

Although the Husky isn’t as gregarious as the Lab, he is just as intelligent. He can be a great family pet and is known to calm crying babies with his surprisingly melodious howling.

Owing to their working dog lineage, both the Lab and the Husky are smart, strong, and energetic. Naturally, their offspring would have more or less the same temperament.

Still, no two Labskys will have the exact same personality.

If, on the other hand, he’s more Husky than Lab, he’ll be somewhat reserved.

To make sure that you get a Labsky with the best possible personality, always do a background check. Ask the breeder about his parents, and what he was like as a puppy. Did he or his parents ever have a history of aggressive or problematic behavior?

Even if a puppy doesn’t have any obvious behavioral issues, he still needs early training and socialization. That way, you won’t be caught off-guard by any personality problems later on.

How To Train a Labrador Husky

Both the Labrador and Husky are smart dogs, so the Labsky’s ability to learn won’t be a problem. His willingness to learn, on the other hand, might be a different story.

As mentioned earlier, he can be either as agreeable as the Lab, or as stubborn as a Husky. Don’t be surprised if your friend’s Labsky has learned to dance on his hind legs in a week, but yours hasn’t even learned how to “stay” within the same period!

Don’t lose your cool around him, though. Huskadors are sensitive to human emotions, so they’ll know if you’re not happy with them. And if you’re not happy, they won’t be happy either. The Huskador isn’t a dog for people with short fuses.

Nor is he a dog for people whose idea of “extreme sports” is couch surfing. He’ll be looking to flex those Labrador Husky muscles during his waking hours, so make sure you have enough energy to keep up with him.

But if you have lots of patience and energy to spare, this particular Husky Mix is a joy to have around. He’s game for anything that involves chasing, retrieving, hide-and-seek, and anything that plays to his strengths as a Labrador-slash-Husky.

Whether your Labsky is trainable or not, it’s important to start early. The younger and more impressionable your Labsky is, the easier it’ll be to teach him that, no, the “Welcome” rug is not his personal toilet.

So, if he sits down when you tell him to sit, say “Good boy!” or give him a treat. But if he doesn’t, or he insists on doing something else, try a different way to teach him. Better yet, start with something simple, then gradually ramp up the difficulty of the tasks.

Lastly, don’t forget to socialize him. Exposing him to as many people as possible lowers the chances of him becoming aggressive later on. Labskys aren’t guard dogs, but they can become overly wary of people if the only humans they know (and are comfortable with) are their immediate family members.

How To Groom a Labsky

Usually, a designer dog would have a grooming regimen specific to him, since he can be easy or hard to clean depending on what type of coat he inherits.

Fortunately for Labsky owners, Labs and Huskies have similar coat types. In other words, most (if not all) Labskies have the same general grooming needs.

You’ll notice that your Labsky sheds profusely during spring and fall season. Even outside that, you might see more Labsky hairs on your carpet than you’re comfortable with.

Either way, brushing your dog’s coat at least twice a week will help keep shedding to a minimum. You’ll also want to invest in a high-quality vacuum cleaner, in case the shedding gets out of control.

Labsky coats contain natural protective oils that keep dirt at bay, so you’ll only need to bath him when necessary. Don’t forget to clean his ears, brush his teeth and clip his nails short while you’re at it. If, while bathing him, you notice anything “off” — like foul odor that won’t go away, or redness and irritation on the skin — take him to the vet as soon as possible.

What Are The Health Problems of a Labrador Husky Mix?

If you don’t have enough room in the budget for a pooch’s medical care, the Labsky is probably not the best dog to have. Both of his parents have a long list of diseases that their breed tends to be prone to, like arthritis, obesity, glaucoma, dental issues, cancer and myopathy.

No matter how healthy your Labsky looks, make sure to schedule a checkup for him at least once a year. The sooner the signs of the above diseases are spotted, the better.

How Much Is A Husky Lab Mix?

A lot of factors affect the price of a Labsky, such as his appearance, lineage and the good reputation of the breeder (or lack thereof).

In general though, you can expect to fork out anywhere between $300 and $800 for a Labsky pup. You should also factor in the cost of his yearly care, which includes but is not limited to food, training, checkups, supplies, professional grooming, etc.

All in all, you can expect to spend an additional $1,000 (at the very least!) for every succeeding year your dog is alive. So before you get won over by a Labsky’s beautiful face, take out your checkbook and do the math first.

For most people, the easiest place to start looking for Husky Labrador Puppies is the Internet. All you have to do is type “labsky puppies for sale” in the search bar, and Google will pull out all results that are relevant and close to your location.

That’s all well and good, except the Internet won’t always tell you whether a store or breeder is good. Sure, you can look at the reviews, but more often than not, you won’t get a lot out of those either.

If you have a physical location nearby where you can look at Husky Lab Mix puppies for sale, that’s great. You can check out the breeder for yourself, talk to them personally, and check if the puppies are being raised under good conditions.

If the breeder talks big about how he’s only got “the best” dogs, but his shop smells like an unwashed hundred-year-old stable, you’ll know not to do business with him.

Are you ready for a Husky Lab Mix in your life?

Labskys, or Husky Labs, or whatever you want to call them, are a mixture of two of America’s most beloved dog breeds. If the Labsky’s the right dog for you, and you’re the right owner for a Labsky, you’ll have an awesome best friend indeed.

Just make sure you’re ready to take on this energetic and intelligent breed. After all, he (or she) needs a good home just as much as you need a furry companion.