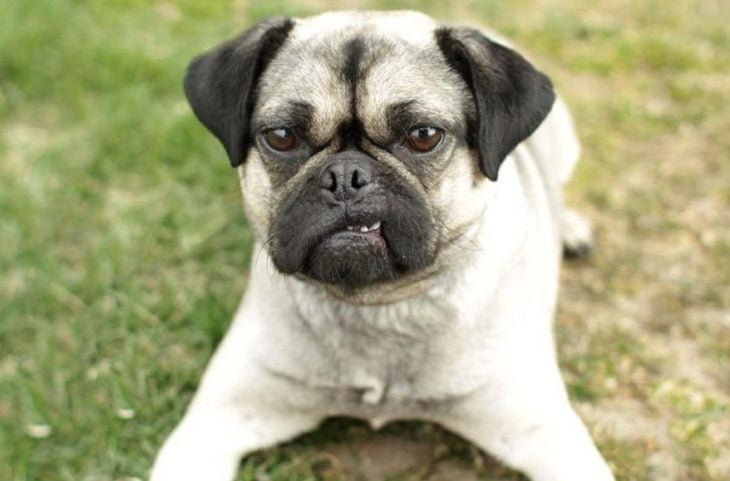 Of the many designer dogs that exist, the Husky Pug is probably one of the strangest.

After all, it’s hard to imagine the pup of an athletic, 60-pound Siberian Husky and a laidback, 20-pound Pug.

Surprisingly, the combination works. The Husky Pug is a lively, lovely dog who’ll make sure your days are never boring.

Not everyone can be a Husky Pug owner, though. Before you get yourself a Husky Pug Mix, here’s everything you need to know about the Hug Dog.

All About The Husky Pug Mix

What Is a Husky Pug Mix?

The Husky Pug Mix, Pugsky, or “Hug” as he’s usually called, is a designer dog.

Designer dogs are the offspring of two purebreds of different breeds. The Hug Dog, for example, is the pup of the Siberian Husky and Pug.

No one really knows who bred the first Pug Husky or when. What we do know is that there are people who love Pugs AND Huskies and wouldn’t mind a combination of the two.

Before we go into more detail about the Husky Pug, let’s touch on the controversy surrounding designer dogs first.

Some people say that — despite popular belief — hybrid dogs aren’t really healthier than purebreds. If anything (so these people say), hybrids double the chances of a pup inheriting the genetic diseases his purebred parents are prone to.

Others beg to disagree, pointing out that mutts — dogs that have at least one mixed breed parent — are less prone to disease than purebreds.

Whichever side you’re on, you’ll want to consider both points of view before buying a Hug Dog.

When it comes to designer dogs, the more differences there are between the parents, the more variations there will be in the resulting hybrid.

For example, the Siberian Husky and Pug look very different from each other. If you pair them together, they’ll produce a litter of pups that may not look like each other. Sometimes, the pups will look so different, you won’t believe they’re actually the same dog!

Then again, that’s what makes the Husky mixed with Pug dog so interesting.

Because of the size difference between a Hug’s parents, the Siberian Husky is usually designated as the mother.

If you’re getting a Pug mixed with Husky dog, make sure there’s enough room in the house for a bouncy, 60-pound pooch.

Looks-wise, a Hug puppy can take after either of his parents. He can have the flat face, crinkled skin, and curled tail of his father. Or he can have the long muzzle, straight tail, and piercing blue eyes of his mother.

Most Hug puppies have muzzles that are in-between their parents’ — that is, neither too flat nor too long.

Coat type and color also vary widely. A Pug Husky can have his dad’s short thin hairs, or his mom’s long thick fur. He can black, white, silver, gray or even red.

To sum it up, there’s no telling what a Hug Dog will look like. Genes, environment and the way he’s raised all play a part in how a Husky Pug Mix will turn out. If you want to be 100 percent sure that a puppy is a Hug, ask the breeder.

The Hug Dog personality combines the Pug temperament with the Siberian Husky temperament.

Pugs date back to ancient China, where they served as companions to the emperors. As a result, they’re used to being pampered, and have a laidback, loyal and somewhat co-dependent personality.

Huskies, on the other hand, are a little more independent. Raised in the freezing winters of Siberia, Huskies were bred to pull cargo over long distances under harsh weather conditions. In order to be successful as sled dogs, Huskies needed to be strong, resilient and energetic.

Both the Husky and Pug are playful and extroverted, though they express these traits in different ways.

Huskies are infamous for being escape artists. The moment you take your eyes off them, they’ll disappear faster than a Ferrari on full speed.

Assuming your Hug takes after his mother, he’ll probably be an escape artist too. It might be a good idea to lock all openings in your house when he’s around. Better yet, play fun games with him every now and then, so he won’t have a reason to escape.

Even if your Hug gets his personality from his father instead, don’t relax just yet. Pugs aren’t the sort of dogs you leave alone either.

If Huskies need supervision because they run away, Pugs need the same for opposite reasons.

Pugs are small, tire easily and are prone to breathing problems due to their facial structure. They’re also demanding of your attention, which makes sense considering their royal origins.

On the bright side, Pugs are born comedians. They’re the sort of dogs who almost always show up in “Funniest Dogs” compilations. Shower them with enough love and hugs, and they’ll shower you with affection, kisses and lots of laughs.

Considering the Hug’s general temperament, he’s not suitable for newbie dog owners. Nor will he mesh with people who are hands-off with their pets.

What he will mesh with are experienced dog owners, and owners who don’t mind having their dogs tag along 90 percent of the time. If the latter sounds like you, getting on the Hug train might not be such a bad idea.

How To Train a Hug Dog

In general, Husky Mixes have a stubborn streak, and the Pug and Husky Mix is no different.

The Hug is particularly challenging because his Husky blood wants him to be active all the time, but his Pug blood makes it hard for him to engage in anything too tiring.

It’s not that Pugs are lazy. (They only seem like it!) It’s just that, due to their facial structure, Pugs are prone to breathing problems. Keep in mind that, unlike humans, the only way dogs can cool off is by panting. If a Pug gets exhausted, he’ll instinctively pant it off, but if he can’t even breathe properly — well, you get the picture.

At the same time, you can’t not exercise a Hug. If he has his Husky mom’s energy levels, and he has no productive outlet for said energy, he’s going to take it out on your furniture, shoes, and anything else he can sink his teeth into.

The key is to exercise your Hug enough to rein in his destructive tendencies, but not so much that he’ll literally pass out from exhaustion.

A daily walk is a good way to exercise a dog. Make sure your Hug gets at least an hour or two every day.

If he gets bored from walking, you can always go for a brisk jog instead. Again, don’t do anything too strenuous: Your Hug needs just enough movement to keep his weight within healthy levels.

Also, keep your Hug indoors when the weather’s hot. The last thing you’ll want to deal with is a dehydrated Hug — not a pleasant sight!

If your Husky Pug has to stay indoors, perk him up with mentally stimulating games. Treasure hunts, hide-and-seek and the good ol’ “Fetch” are always great for keeping your dog on his toes without exhausting him.

Since you’re already exercising your dog, why not train him while you’re at it?

It can be frustrating to deal with a Hug’s stubbornness, especially when the Husky blood is strong in him. However, try to avoid punishing him in any way: Dogs don’t respond well to harsh treatment.

Aside from the usual tricks that Pugs and Huskies learn, a Hug should be socialized. Socializing means exposing him to as many people/pets as possible, as often as possible. That way, he’s not likely to be unnecessarily aggressive.

Again, the Husky Pug Mix is not for inexperienced owners. If you’ve never trained a dog before, or don’t have the resources to get a professional trainer for him, you’re better off looking at other breeds instead.

How To Groom a Husky Pug

Both the Husky and Pug shed a lot, so regular brushing is important for a Husky Pug.

If his hair is short, a biweekly brush routine will do. But if he has Husky fur, you might want to brush him at least once every other day.

You don’t have to bathe a Hug more than once every two weeks. Assuming he’s indoors all the time, he shouldn’t have too much dirt or odor on him. Also, if you bathe him too often, you could end up stripping the natural protective oils on his coat, which are essential to keeping his skin healthy.

If you do need to bathe him, make sure to thoroughly inspect his body for any signs of disease or infection. Gently wash in-between his wrinkled folds if he has his father’s skin. Use cotton buds for dogs to clean out his ears, and sensitive areas like underneath his eyes. Clip his nails once they get long enough to make unpleasant noises on the floor.

Need help on grooming a Husky Pug? No problem. Get a professional groomer to do it for you. Ideally, the groomer should be someone who’s experienced in grooming Hugs. If he’s never groomed Hugs before, ask whether he’s groomed Pugs and Siberian Huskies. If it’s a “No” to both, consider looking somewhere else.

What Are The Health Problems of a Pug Husky?

If your Hug is more Pug than Husky, it’s likely he’ll suffer from brachycephalic airway syndrome. He may also suffer from skin problems owing to his excess wrinkles, eye problems, and spinal issues. Female Hugs may not be able to give birth naturally due to the Pug’s large head, making it necessary for her to undergo a C-section.

If he’s more Husky than Pug, he might be a little bit healthier, though there are still Husky diseases that you need to watch out for. Huskies can suffer from hip dysplasia, eye diseases like cataracts and corneal dystrophy, and hypothyroidism.

For Hugs, yearly checkups are essential to early detection and treatment. A Hug can live for as long as 15 years, so make sure he lives every moment healthy and happy.

How Much Is A Husky Pug Mix?

A Hug puppy typically costs between $1,230 and $2,000. The relatively high price is due to the general difficulty of breeding healthy Hug puppies. Unless you’re adopting from a shelter, a “bargain” price is usually a sign that a Hug may not have been bred under the best conditions.

Even if you do manage to buy a healthy Hug, you’ll need to account for the yearly costs of raising him. Food, supplies, training, grooming, visits to the vet — these can add up to $1,000-$2,000 per year.

Where To Buy Hug Puppies

You can easily find Hugs online by Googling “husky pug mix for sale,” or something like that. However, we highly recommend paying a personal visit to the Husky Pug breeders in your area. That way, you can see for yourself if the breeder genuinely cares about the Hugs they sell, or they’re just out to make a quick profit at the expense of their dog’s health and wellbeing.

Do you think a Hug is the right dog for you?

Admittedly, Hugs aren’t the easiest dogs to care for. They have special needs that you may not have the resources to meet. But if you do, consider adopting a Pug and Husky Mix into your home. He might just be the most delightful addition to your family yet.