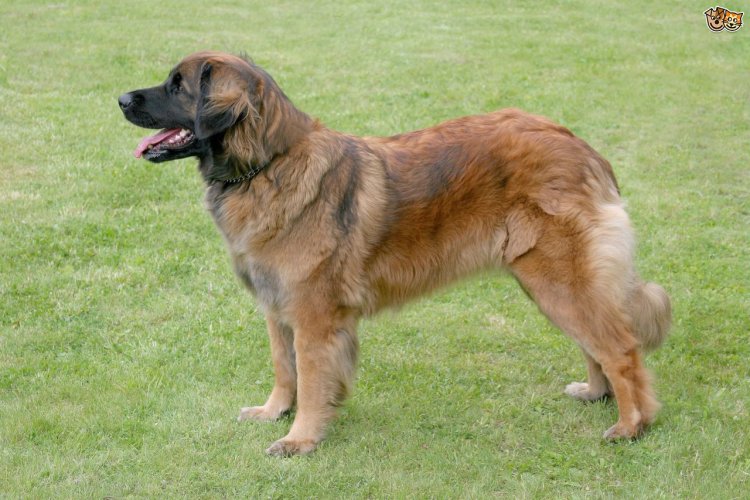 The Leonberger combines the best of three breeds.

He has the smarts of a St. Bernard, the friendliness of a Great Pyrenees, and the confidence of a Newfie.

As great as he sounds, he’s not a pooch for everyone. Below is everything you need to know about the Leonberger breed.

A Basic Overview of the Leonberger

Standing 80 cm (31.5 in) at the withers, the Leonberger is one of the largest dog breeds in the world.

You can easily recognize him by his black mask, lionlike mane, and bushy coat that comes in varying shades of tan and black.

The Leo might look calm and dignified, but don’t be fooled: He’s a big, carefree softie deep down.

He cleans up nicely, but he’d rather you don’t fuss too much over his looks.

Also, he’s something of a heavy shedder, and isn’t above rolling in the mud for fun.

If you like your things neat and tidy, this pooch isn’t for you.

But if you don’t mind his devil-may-care attitude, plus his copious amounts of hair, you’ll find an intelligent, affectionate and gentle companion in this pooch.

The Leo is best with families who can shower him with love and attention, not to mention give him a place big enough for him to play in.

What is the Personality of the Leonberger?

The Leonberger can be scary at first. After all, he has the look and size of a lion, plus the sort of bark that sends chills up your spine.

But when you get to know him better, he’s actually a gentle giant.

He’s one of those big, friendly dogs who want nothing more than to be loved by a family.

Also, he’s great with kids — as long as you don’t leave him alone with them for too long.

He’s not an aggressive dog, but his size makes it easy to knock over small children.

Otherwise, he can calm down crying babies, cheer up lonely children and even sooth a worrywart adult.

That’s why Leos are often used as therapy dogs.

It’s also worth noting that the Leo is a sensitive pooch.

He gets distressed whenever there’s a fight in the house, so keep him out of earshot whenever you’re at odds with anyone in the family.

If you want your Leo to stay on his best behavior, socialize him early. Get him out of the house as soon as he’s old enough to walk.

Put him into contact with as many other people (and other pets) as possible. The more sights, smells and sounds he’s exposed to, the less skittish he’ll be about new experiences when he’s older.

History and Background of the Leonberger

Considering his looks, it’s easy to assume that the Leonberger was named after the king of the jungle.

Actually, he got his name from the German town of Leonberg, which still exists today.

In the 1830s, a resident of Leonberg named Heinrich Essig created the breed by crossing a female Newfie with a male “barry,” then crossing with the Great Pyrenees.

Related: All About the Great Dane Pitbull Mix

The result was a big, beautiful and mild-mannered dog beloved by royals like Otto Von Bismarck, Napoleon II and Empress Elisabeth of Austria.

The first Leonbergers were officially registered in 1846.

They became so popular in and out of Germany that they were brought to Canada as rescue dogs.

However, by the time World War II ended, Leos almost went extinct due to their owners leaving them behind.

Luckily, eight of them survived to become the ancestors of today’s Leos.

Are Leonbergers Playful and Fun?

Make no mistake: Beneath the Leonberger’s docile exterior is a pooch who lives for fun.

If you run in front of a Leo, he’ll definitely run alongside you.

He’s also game for anything that plays to his natural strengths, like swimming, fetching and rolling side to side to make himself look cute.

Related: What You Need To Know About the Bullmastiff Dog Breed

Not that he needs it, though: He’s already a big, adorable softie to begin with.

Unlike his leonine namesake, Leos aren’t too concerned about cleanliness.

Don’t be surprised if he turns up every now and then looking like he just showered himself with dirt.

That kind of habit can be off-putting for neat freaks, but if you’re as carefree as he is, you two will get along swimmingly.

How Much Exercise Does a Leonberger Need?

Like other working breeds, the Leo needs plenty of exercise. Brisk 30-minute walks won’t suffice: The Leo needs to really sweat it off.

At the minimum, he should be exercised for two hours a day.

His activities may include running, jumping and other high-intensity workouts.

Throw in a few brain games in the mix, and you’ve got the perfect exercise routine for a Leo.

Don’t forget to give him ample space to throw his weight around.

If his favorite playground happens to be your yard, install a fence high enough to keep him (and your neighbors) safe.

Alternatively, take him to a nearby park or beach where he’s free to do his thing and interact with other dogs.

Take note: Leo puppies are still developing physically, so there’s no need to exercise them as much as the adults.

When it comes to young dogs, follow the 5-minute rule — that is, add 5 minutes of exercise for every month of your puppy’s life.

Leo puppies can be accident-prone, so keep them away from stairs, furniture and other potential danger zones until they’re 18 months old.

The idea is to keep them fit enough to be healthy, but not over-exercise them to the point of increasing their risk for injury.

What are the Grooming Needs of the Leonberger?

That being the case, their coats need to be brushed at least once a week.

Not only will regular brushing keep shedding to a minimum, but it’ll also prevent infections caused by dirty and matted fur.

Also, Leos need to be bathed every two or six weeks.

His shaggy coat can hard to clean, so make sure you have all the right tools beforehand.

Before bathing a Leo, run a blow dryer through his coat. Use the dryer to puff up his hair one section at a time.

Then, apply shampoo to your dog’s hair, rinse it thoroughly, and pat him dry with a soft towel.

Of course, his coat isn’t the only thing worth your attention. While you bathe him, inspect him for any signs of infection.

Clean the outside of his ears with a mild ear-cleaning solution for dogs.

Check whether his nails are clacking on the floor, and clip them if they’re too long.

Are Leonbergers Easy to Train?

With positive reinforcement, plus a healthy dose of persistence and patience, you can raise a Leonberger who’s always on his best behavior.

The best way to train a Leo is to reward him every time he learns something new.

A treat or two will do the trick, but you need to be careful not to overfeed him lest he becomes overweight.

As soon as he masters simple commands like “Sit,” “Stay” and “Heel,” you can level him up to more complex tasks like “Roll Over” and “Play Dead.”

Related: All You Want to Know About The Cairn Terrier Dog

If you’re ever tempted to scream at a Leo for not “getting” something, take a deep breath and step back.

As mentioned earlier, Leos are sensitive dogs. Hurting them won’t make them more willing to learn new things; in fact, it’ll do the exact opposite.

Owners who don’t know how to train a Leonberger might benefit from hiring a professional trainer.

Aside from bringing out the best in your dog, a professional can also be a good source of advice on what mindset to adopt when training a Leo.

How Much Does a Leonberger Puppy Cost?

Reputable breeders typically charge around $2,000 for a Leo, even if the dog isn’t show quality.

The reason for the price is that healthy Leos take a lot of skill and care to breed.

If you’re able to find a Leo for a “bargain,” chances are you’ll be dealing with behavioral and health issues that could be more expensive in the long run.

Also, the annual cost of raising a Leo should be taken into consideration.

On average, you’ll be shelling out an additional $500 to $2,000 per year for a dog’s vet visits, training, food, supplies and the like.

The Leonberger is a majestic, gentle and lively dog who can bring lots of love, laughter and cheer to your family.

If you own one of these beauties, let us know what you think in the comments!