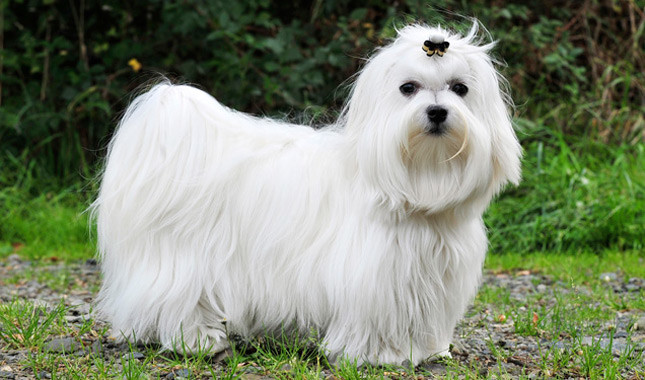 Meet the pooch that Aristotle called a “cloud floating in the sky.”

That’s right: The Maltese has been around long enough for ancient Greek philosophers to talk about (and coo over) him.

If you’re cooing over him too, here’s what you need to know about the majestic yet mischievous Maltese.

A Basic Overview of the Maltese

The Maltese belongs to the bichon family, or dogs that are small yet long-haired.

At 10 inches tall and 8 pounds, this toy dog can snuggle comfortably in your lap.

Unlike his relatives, the Toy Poodle and Bichon Frisé, the Maltese has a single-layer coat of straight silky hairs, which are long enough to touch the floor.

You can also find varieties that have curly hair, though these aren’t considered suitable for show.

Because long hair can be impractical to groom, many Maltese owners give their pooches a “puppy cut,” which makes them look like messy-haired Bichon Frisés.

Fortunately for people with delicate sinuses, Maltese are generally hypoallergenic.

Being an ancient breed, the Maltese has had several nicknames over the years, including “Canis Melitaeus,” “Melita,” “Maltese Lion Dog,” “ancient dog of Malta,” “Roman Ladies’ Dog,” “The Comforter,” “The Spaniel Gentle” and “Maltese Terrier,” to name a few.

As you’re about to see, there’s a good reason for all these monikers.

The Maltese is one of those dogs that can’t seem to stay still. He’s either doing something, or looking for something to do.

If you’re not ready to handle such a huge amount of energy from such a small dog, the Maltese may not be for you.

But if you have the gregarious personality to match his, or at least the willingness to humor him whenever he wants to get moving, the Maltese can be the perfect canine companion.

Not only can he bring light and sunshine into your life, but he’ll also be more than happy to spread the fun around.

How Much Exercise Does a Maltese Need?

If your Maltese is younger than 9 months old, you need to be careful not to over-exercise him.

His bones and muscles are still developing at that age, so anything too strenuous can hurt his growing body.

Even when he’s already an adult (or around a year old), a Maltese doesn’t have to be exercised as much as larger sporting breeds are.

You can take him for a 20- to 30-minute walk twice a day every day, and still meet his exercise requirements.

If possible, stick to a schedule when walking your Maltese. That way, as soon as you take out the leash, your Maltese will know that it’s time to get moving.

Also, don’t forget to let him use the “bathroom” before hitting the road.

In case walks get too boring for him, add games like “Fetch” and “Find It” into his repertoire.

If your Maltese is especially outgoing, don’t be afraid to let him play with other dogs. As long as you keep a close watch on them, no one is going to get hurt.

What are the Grooming Needs of the Maltese?

When you’re as hirsute as a Maltese, an intense grooming regimen is a must.

Whether he has a straight silky coat or a “puppy cut,” a Maltese needs to be brushed at least once a day.

Daily brushing keeps his coat from matting, and removes any dirt that might’ve gotten tangled into his hair.

Depending on how often he gets dirty, you can bathe your Maltese once a week, or once every three weeks.

Because his face is almost entirely covered with hair, a Maltese is prone to “tear stains,” or brownish patches around the eyes.

Related: The Big Guide To The Beagle Dog Breed

He is also be prone to face stains due to dipping his head into the food bowl, or poking his nose into places where it shouldn’t be.

If you see any stains on your Maltese’s face, gently remove them using a soft cloth dipped in warm water.

You should also check his ears every now and then for signs of infection, like redness and foul odor.

Take a look inside his mouth, and brush his teeth regularly to prevent buildup of tartar and other bacteria.

While you’re at it, trim his hair and nails whenever they get too long for comfort.

It’s better to get him used to grooming at an early age, since he won’t be too upset every time you take out a brush.

But if he’s always squeamish about grooming sessions, you’ll want to take him to a professional groomer instead.

Are Maltese Easy to Train?

Chances are, your Maltese is a smart pooch, so teaching him new tricks shouldn’t take too long.

Teach him the basics like “doing his business” outside the house, getting used to a leash, and following basic commands like “Sit,” “Stay” and “Heel.”

Be consistent and firm when you’re training him (e.g. don’t pat him on the head for biting your heel), but try to use positive reinforcement as much as possible.

Maltese are sensitive dogs, and won’t respond well to being spanked or screamed at.

Some Maltese owners report that their dogs can get too yappy at times.

If that’s the case with your Maltese, teach him the “Quiet” command using a training clicker.

Whenever he stops barking, say “Quiet,” click the training clicker and give him a treat afterwards.

Do this often enough, and your Maltese will learn that “Quiet” means “stop barking.”

Alternatively, you can identify the triggers for his barking and act accordingly.

For example, if he barks whenever a certain person is around, put him in a crate before that person comes over, and gently reassure your dog that everything will be all right.

How Much Does a Maltese Puppy Cost?

Considering his history as an aristocratic dog, it should come as no surprise that the Maltese is one of the priciest pooches around.

That’s for a show quality dog with papers, a superior pedigree and a clean bill of health.

You should also budget roughly the same amount for his yearly upkeep, which includes visits to the vet, supplies, toys, food, grooming and the like.

If you want to save money on a Maltese, try adopting from a shelter.

However, keep in mind that dogs from shelters usually have behavioral issues, which can be difficult to deal with unless you’re a dog training expert.

Maltese are cute, sweet-tempered dogs, but that doesn’t mean you should buy any of them willy-nilly.

Just like other dogs, you need to get to know him first, and carefully assess whether he’s the right dog for you.

As always, let us know in the comments what you think of our Dog of the Day!