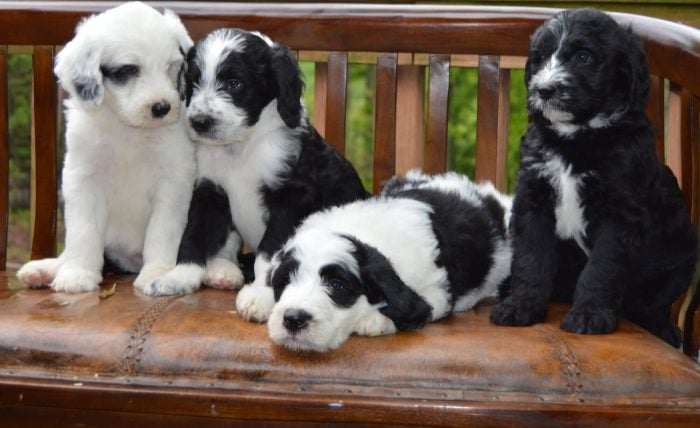 The Shepadoodle is an interesting mix.

He combines two breeds that seem as different as night and day — the German Shepherd (GSD) and the Poodle.

Then again, the GSD and Poodle have more in common than you think.

(For example, did you know that Poodles were once used to help hunt waterfowl? Those puffy coats aren’t just for show.)

Also, the Shepadoodle isn’t just the GSD and Poodle rolled into one.

He’s a special pooch in his own right, as you’re about to find out.

Without further ado, let’s get into what you need to know about the Shepadoodle.

The Shepadoodle has many names, including German Shepherd Poodle Mix, Shepherd Doodle, German Doodle, and Shepdoodle.

For obvious reasons, we’re not going to use either of those.

As his name suggests, the Shepadoodle is a cross between the German Shepherd and Poodle. He’s not a “mutt,” though. He’s what’s known as a crossbreed or designer dog.

Crossbreeds or designer dogs are the offspring of two purebred dogs of different breeds. Often, they’re bred to inherit the best traits of both their parents.

Mutts, on the other hand, are usually born by accident and have one or more mixed breed parents.

Instead, they’re registered with the American Canine Hybrid Club (ACHC).

What Does a German Shepherd Poodle Mix Look Like?

Unlike purebreds, hybrids don’t have a uniform appearance.

He can have straight or wavy hair, colors that range from black to cream, or markings that may or may not be there.

That said, Shepadoodles do share a few things in common.

Size is probably the most obvious one. On average, adult Shepherd Poodles stand between 22 and 28 inches at the shoulder and weigh between 50 to 90 pounds.

Also, their ears tend to be large and fold forward. And their tails are curved with a slight fringe.

Apart from the above, there’s plenty of variety in how Shepadoodles look.

The only way to know for sure whether you’re dealing with a Shepherd Doodle is to ask about his parents.

If they’re a GSD and Poodle, and they’re both purebred, then their pup is probably a Shepadoodle.

As you know, German Shepherds are working dogs.

They’re smart, strong and brave, which makes them suitable for military and police work. They can make good family pets, as long as you give them lots of space and exercise.

Poodles, on the other hand, have a more regal air about them.

They’re the sort of dogs that celebrities like to show off to the world. And why wouldn’t they, when Poodles are so cute and spunky?

Luckily, Shepadoodles combine the best of both. They’re playful and fun-loving like the Poodle, and protective and loyal like the GSD.

They’re perfect family dogs, especially when they have ample room to move around.

There shouldn’t be too many problems with the Shepadoodle temperament. If he’s been socialized with people and pets early on, he’ll grow up to be an affable, lovable pooch.

But if he’s been neglected or mistreated as a puppy, training him will be a bit more challenging.

No two Shepdoodles are exactly alike, so you’ll have to tailor your dog’s grooming regimen based on his unique needs.

Some Shepherd Doodles are hypoallergenic, meaning they don’t shed a lot. If they do, chances are they’re going to have tangled or matted fur.

Removing tangles and matting is important since these irritate your dog’s skin and cause infections.

The best way to remove tangles is to brush him at least once every other day. It also helps to use shampoos that soften his fur and make it easier to untangle.

Also, make sure his coat is appropriate for the weather.

If it’s hot, give him a professional buzzcut.

If it’s cold, let his hair grow out, while making sure to keep it tangle-free.

Don’t forget to give him the full body treatment.

While you’re bathing him, look out for signs of infection like red skin and smelly discharge.

Clip his nails once they’re long enough to clack on the floor. Brush his teeth at least once every other day.

In case you don’t have time to groom your Shepdoodle, or you’re just not comfortable with grooming dogs, don’t fret.

You can always take your dog to a professional, preferably someone who’s experienced with grooming German Shepherd Poodle Mixes.

If your groomer is worth his salt, he should be able to give you a primer on the do’s and don’ts of keeping a Shepadoodle clean.

How to Train a German Shepherd Poodle

They learn best when you start training them as early as possible — i.e., when they’re old enough to walk on their own.

Let’s say you want to teach your Shepdoodle to “Sit.” One way to go about this is to take a treat, get down in front of your dog, and let the treat hover just above his nose.

He’ll try to reach it by sitting down to make himself taller.

Don’t let him nibble the treat until his bottom touches the ground. Repeat these steps a couple more times.

Then, instead of a treat, hover your hand above his nose like a traffic enforcer signaling cars to stop.

He’ll do the same thing with the treat: Try to make himself taller by sitting on his hind legs.

Again, don’t let him touch you until he sits. Once he does, pat him on the head as a reward. Rinse and repeat two more times.

Now you can progress to verbal commands. Do the same hand signals as above, except start saying “Sit” before you give out the signal.

Keep doing this until your dog learns to associate your hand gesture and the sound “Sit” with letting his bottom touch the floor.

Because you consistently made it clear what “Sit” is supposed to look like, your Shepadoodle will know exactly what to do whether you use verbal or nonverbal gestures.