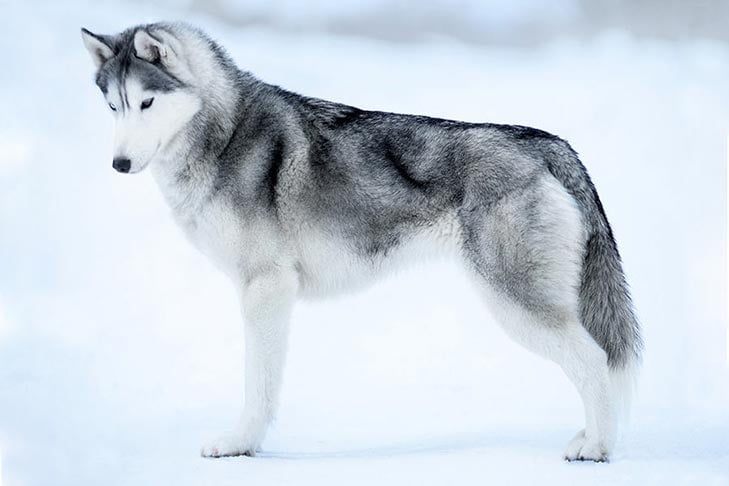 The Best Qualities Of The Siberian Husky Dog Breed

Siberian Huskies are striking, aren’t they?

With their wolf-like looks, piercing eyes, and relentless tenacity, these beautiful dogs have captivated hearts all over the world.

Even if you haven’t seen the Balto series of animated films, chances are you’ve seen Siberian Huskies survive harsh winters on TV.

All that said, Siberian Huskies aren’t for everyone. Before you take on the responsibility of caring for one of these pooches, read this guide first.

A Basic Overview of the Siberian Husky Dog Breed

When people talk about the “husky,” they usually mean the Siberian Husky. However, the Siberian Husky is only one of several types of husky dogs, including the Alaskan Malamute, Labrador Husky, Sakhalin Husky, Mackenzie River Husky and Alaskan Husky.

Like most huskies, Siberian Huskies have a distinct wolf-like appearance. Although they look a lot like Malamutes (and vice versa), there are subtle differences. For one, the Siberian Husky hangs its tail downwards, while the Malamute curls its tail on its back.

The Siberian Husky comes in a wide variety of colors and patterns — most famously the black-and-white-fur and pale-blue-eyes combo.

Having been bred in the harsh winters of Siberia, this pooch has a lush double coat, a resilient personality, and a strong instinct to protect its family no matter what.

What is the Personality of the Siberian Husky Dog Breed?

Siberian Huskies are a perfect blend of “independent enough to not be bothersome” and “affectionate enough to be there for you when you need them.”

Because their ancestors were allowed to roam around freely during the summer, Siberian Huskies are constantly on the lookout for places to go and things to do.

If you live near a forest, for example, they’ll probably indulge their need to hunt small animals.

Despite being natural hunters, Siberian Huskies can be trusted to look after children. They’ve even been known to soothe babies with their howling.

Well-trained Siberian Huskies are friendly, so you don’t have to worry about them scaring off guests or fighting with other pets.

Siberian Huskies are also extremely curious and will wander out of your yard if they find a hole big enough to crawl out of. If you don’t want them to end up in places they shouldn’t be, make sure you install a fence that’s high and sturdy enough to keep them safe.

Overall, Siberian Huskies have great personalities that make them suitable as family dogs. As long as you live in a cold region, and you have enough space in your place for these pooches to move around, you’ll have peace of mind.

History and Background of the Siberian Husky Dog Breed

According to DNA tests, Siberian Huskies are one of the oldest dog breeds in the world. They’re generally believed to have been bred by the Chukchi, a nomadic people in Siberia.

The Chukchi treated these dogs as part of the family, and have already been using them as a means of fast transportation even then.

Because of their sledding capabilities, Siberian Huskies were eventually imported to Alaska around 1908 to help transport supplies during the Gold Rush.

Perhaps the most famous showcase of the Siberian Huskies’ skills was the 1925 serum run where 150 sled dogs ran 674 miles in 5.5 days to transport diphtheria antitoxin to the town of Nome, preventing an epidemic and saving many lives.

Soon, Siberian Huskies became so popular in the U.S. that the Siberian Club of America was established in 1938 as an all-around resource for the breed.

Even though today’s Siberian Huskies are much different compared to their Chukchi ancestors, they maintain many of the wonderful qualities that make this dog so alluring.

Being sled dogs, Siberian Huskies have lots of energy to throw around — and then some.

You’ll never get bored with a Siberian Husky. These pooches will wholeheartedly challenge your creativity in devising novel ways to keep their paws occupied. (Because otherwise, those paws are going to scratch into places you don’t want them to.)

Luckily, they’re not hyperactive to a fault. Well-trained Siberian Huskies aren’t likely to jump on people, which is a good thing if you have children and family members who are easily surprised.

Like many dogs, they’ll happily play with any toy you throw at them and can guarantee you hours of fun and laughter.

If you like having a dog you can play with for as long as you want, the Siberian Husky is the pooch for you.

How Much Exercise Does A Siberian Husky Dog Breed Need?

As you might’ve guessed from their playfulness, Siberian Huskies need plenty of exercise.

In general, adult Siberian Huskies should be able to stay active for at least 30 to 60 minutes a day. If you’re already engaged in high-intensity outdoor sports like hiking, exercising this pooch shouldn’t be much of a problem.

Otherwise, you’ll need to find other ways for your Siberian Husky to let off steam. You can enroll your dog in obedience classes where he can make use of his natural intelligence and energy levels.

You can also take him along when you’re jogging around the block. Just keep in mind that, since Siberian Huskies are bred to survive winters, they shouldn’t be get overheated when the weather is hot or humid.

When he’s tired, he’ll probably sit down in the middle of a jog, or start panting like crazy.

The bottom line is, Siberian Huskies are working dogs and should be exercised as such. Give them the time, attention and space to move around your house, and you’ll have a happy dog on your hands.

What are the Grooming Needs of Siberian Husky Dog Breeds?

How much Siberian Huskies shed depend on the climate and time of year. During the cold months, these pooches don’t shed much.

But, about twice a year when the weather gets warmer than usual, Siberian Huskies can shed a ton of hair in a span of three weeks. Once that happens, make sure you have your vacuum cleaner ready.

As long as you brush your pooch’s hair at least once a week to avoid matting, and brush at least once a day during shedding season, you don’t have to worry about hair getting all over your furniture.

It also helps if you bathe them regularly with high-quality dog shampoo, trim their nails once or twice a month, and check them all over for any signs of disease.

Make sure your dog is used to being groomed from a very young age, but if that ship’s already sailed, you can always take him to an experienced groomer who’s dealt with Siberian Huskies before.

Fair warning for first-time dog owners: The Siberian Husky is NOT for the inexperienced.

Although Siberian Huskies are very intelligent, they’re also very stubborn. They’re known to stay on their best behavior in obedience school and then act out once they’re back home. Understandably, this can be frustrating for owners who prefer their dogs to be more predictable.

But if you’re the confident and assertive type, and don’t mind following your Siberian Husky wherever his paws take him, you and your dog will have a great partnership.

Like the wolves they resemble so much, Siberian Huskies look up to pack leaders (read: owners) who enforce the rules consistently and firmly.

It should be noted that “firmly and consistently” is not the same as “harsh and punishing.” Avoid hitting and shouting at your Siberian Husky when they do something you don’t like. Instead, reward them when they’re doing good.

Also, train them as early as possible. Teach them basic commands like, “Sit, Stay and Heel.” Let them learn that your living room floor is not a litter box and that the crate is a safe place to stay when you’re not around. Be patient enough with your Siberian Husky, and they’ll be sure to put their intelligence to good use.

How Much Does a Siberian Husky Dog Breed Puppy Cost?

The price of a Siberian Husky puppy depends on where you buy him and what he comes bundled with. If you’re able to find a puppy for $100, there’s a good chance the dog may not have the wonderful temperament that well-bred Siberian Huskies have.

On the other hand, if you don’t mind spending anywhere between $500 to over $1,000, you can have a Siberian Husky with papers, a decent bloodline, and a sturdy constitution.

You’ll also have to set aside around $1,200 per year for food, supplies, annual checkups with the vet, and other things your pooch needs to feel like a valued member of your family.

The Siberian Husky is a beautiful breed, but he’s definitely not for the lazy dog owner. He will test your patience and endurance to the limit, and he’s not really suitable for warm, tropical or subtropical climates.

But if you happen to live in a Siberia-like environment, and you know how to care for the Siberian Husky, they will shower you with love and loyalty the way Balto did all those years ago.