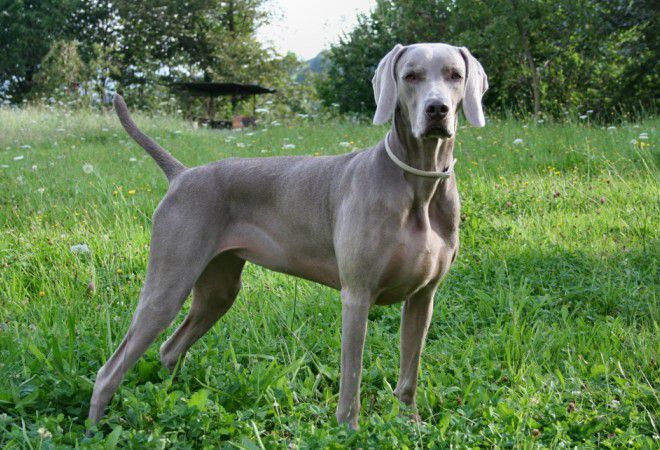 When you see names like “Grey Ghost” or “Silver Ghost,” you usually think of superheroes or famous apparitions.

Actually, they’re nicknames for the Weimaraner, a dog that was prized in Germany for its beauty, intelligence and hunting ability.

Although “Weims” aren’t as prestigious as they used to be, they still retain a strong, dignified personality that makes them equally at home on hunting grounds and in family homes.

A Basic Overview of the Weimaraner

The first thing you’ll notice about the Weimaraner is his eyes.

Large, bright and almost humanlike, they give off an impression of great intelligence, which has led some people to dub the breed as “the dog with the human brain.”

The second most distinctive feature of the Weimaraner is his coat.

Ranging in color from charcoal-blue to various shades of grey (mouse, silver and blue), the coat allows the Weimaraner to blend into the background during dreary days, which explains his “ghost” nickname.

Related: Basenji Breed: Everything You Need to Know About This Dog

Weimaraners have webbed paws, which allow them to swim and chase after water-dwelling prey.

Their tails are usually docked per the American Kennel Club (AKC) breed standard, though tail docking is illegal in some countries.

Generally, Weimaraners are healthy dogs, and can live for up to 14 years if properly cared for.

Despite their hunting instincts, they are house dogs through and through, and work best with experienced dog owners.

What is the Personality of the Weimaraner?

Reading early accounts of the Weimaraner, you’d think this is a docile, well-behaved breed. That’s not quite the reality, though.

Like all dogs, Weimaraner have good and bad personality traits.

On the one hand, they’re friendly, obedient and protective, which makes them suitable as family dogs who’ll watch over your home.

On the other hand, their high intelligence means they can also be stubborn, which can make them challenging to handle unless you’re an experienced dog owner.

If you want to live with a Weimaraner, you need to set ground rules from the get-go.

As soon as he’s old enough, he needs to learn that other people, dogs, cats and small animals aren’t there to hurt him.

He needs to be exposed to as many sights, sounds and smells as soon as possible, so that any aggressive tendencies can be toned down.

Also, Weims can be prone to separation anxiety.

He will get destructive, and may end up hurting himself, unless you teach him to stay calm even when you’re not around.

This is where methods like crate training can come in handy.

All in all, the Weimaraner isn’t for the novice dog owner.

He needs constant socialization throughout his life in order to keep his aggression in check.

Unless you’re willing to put in that much effort for a dog, you may want to consider buying another breed.

History and Background of the Weimaraner

Experts credit the Weimaraner’s ancestry to various breeds, including the bloodhound, the English Pointer, the huehnerhund and the Great Dane, to name a few.

Whatever the breed’s exact origins, it’s generally agreed that the “pure” version of the Weim came from the 19th century Weimar court in Germany.

Initially, the Germans were protective of the “purity” of the Weim.

When Howard Knight tried to bring two of the dogs to the U.S., the Germans gave him desexed Weims.

Luckily, due to Knight’s persistence, and the fact that many Weimaraners were sent to the U.S. after World War II, the breed came to America anyway.

As of 2017, the Weimaraner is America’s 34th most popular breed according to the AKC.

Are Weimaraners Playful and Fun?

As hunting dogs, Weimaraners are bred to have as much energy and stamina as possible.

If they can’t find an animal to chase after, they’ll probably tail after you or your kids, hoping you’ll take the hint and throw them a Frisbee.

The Weimaraner’s energy has its downsides, though.

The breed isn’t recommended for small children and elderly adults, since their overenthusiasm can cause them to accidentally knock down innocent people.

If you want your Weimaraner to let off steam without hurting anyone, take him outside whenever he’s up for some exercise.

Also, make sure you always reassure him that you’re not leaving him anytime soon. As noted earlier, Weims suffer from separation anxiety.

The last thing you want is to get him agitated and destructive when you’re not around.

How Much Exercise Does a Weimaraner Need?

A 30-minute walk won’t be enough for a Weim: This pooch needs to be pushed hard every day.

If you’re the type who likes to run or jog several miles a day, the Weim may be the perfect companion for you.

Let him tag along on hikes, in the swimming pool, or alongside you when you’re biking.

Related: The Dalmatian: The Most Famous Dog Breed In The Worl

If the above aren’t practical options, a Weim can make do with lower-intensity activities — as long as these activities are adjusted to his needs.

For example, instead of a 30-minute brisk walk in the morning, you can extend the walk to 45 minutes.

You can also do another 45-minute exercise session in the afternoon (preferably something that involves physical and mental stimulation).

What’s important is to let your Weimaraner engage in rigorous exercise for at least 45 minutes a day.

Any less than that, and your Weim could get bored and destructive.

What are the Grooming Needs of the Weimaraner?

Because his coat is short and smooth, the Weimaraner doesn’t need to be bathed too often.

Most types of dirt slide off of him easily, so the only thing he needs is a weekly brush for a healthy, matte-free coat.

On the flip side, his floppy ears are a perfect hideout for bacteria and infection.

If you want a Weim’s ears to stay clean, gently wipe the insides using a cotton ball moistened with a vet-recommended cleaner.

Don’t forget to brush your Weim’s teeth with a dog-friendly toothbrush and toothpaste.

Also, cut his nails whenever they get long enough to make clacking noises on the floor.

And if you notice any signs of health problems (e.g. red skin, foul odor), take him to the vet as soon as possible.

Are Weimaraners Easy to Train?

Weimaraners require a lot of time and effort to train. Even when they’re adults, they need to be constantly socialized to avoid sudden displays of aggression.

If you want your Weim to be as gentle as his temperament allows, train him early on.

Once your Weimaraner is between 10 to 16 weeks old, you should start socializing him.

Get him out of the house every day, and introduce him to as many people as possible.

Related: All About the Great Dane Pitbull Mix

Do the same when exposing him to other dogs, since Weims can be aggressive towards other breeds.

To ease his separation anxiety, get him used to staying in one place for reasonable periods of time.

Give him a room with a window and toys, where he can move freely and have access to things he can take out his stress on.

It’s better not to leave a Weimaraner alone for too long. But if you can’t help it (because you’re busy with work or something like that), you need to get him used to being comfortable even when you’re not around.

How Much Does a Weimaraner Puppy Cost?

For a Weimaraner puppy with only papers, you should be able to find one within the $750 range.

For puppies with papers, breeding rights and a premium lineage, the price doubles to $1,400, and can even reach as high as $7,800.

You can find lower-priced Weimaraner in dog shelters, but those may require more training.

Also, consider carefully the annual costs of raising a Weimaraner.

If you factor in vet bills, vaccines, required medical procedures like deworming, food, supplies, training, grooming and the like, your annual budget should be anywhere between $500 to $1,000 or even higher for a Weim.

Depending on what kind of owner you are, the Weimaraner can either be the most challenging pooch you’ve ever cared for, or the best pet you’ve ever had. Either way, let us know in the comments what you think of this breed!