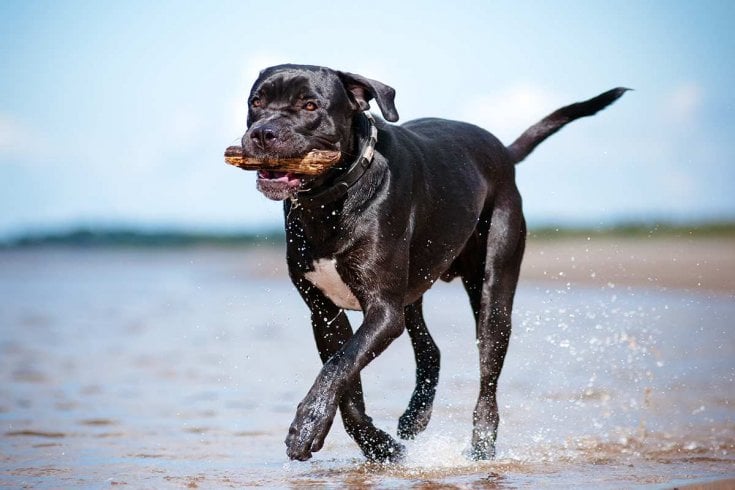 “Cuddly” isn’t a word that comes to mind when you look at a Cane Corso.

After all, he’s a large, athletic and powerful dog who needs a careful but confident hand to guide him in the right direction.

Despite his looks, the Cane Corso can also be one of the most wonderful pets you’ll ever have.

Read on to find out what makes him a unique and fascinating dog breed.

A Basic Overview of the Cane Corso

If you know Italian, you can already guess what kind of breed the Cane Corso is.

Aside from guard duties, Cane Corsos were also used to hunt game like wild boar.

Cane Corsos are molossers a.k.a. mastiff-type dogs. As such, they have short broad muzzles, lop ears and big bones.

Cane Corsos can be black and fawn, with tiny white markings on the chest, chin and toes. They’re generally healthy breeds who can live between 10 and 12 years old.

Cane Corsos thrive in a home where there’s a big yard for them to run in.

They’re also great with people who have the time, energy and patience to satisfy the breed’s exercise requirements.

However, if you’ve never had dogs before, or have trouble asserting dominance over dogs in general, you might want to look at other dog breeds instead.

What is the Personality of the Cane Corso?

The Cane Corso’s personality is shaped by nurture as much as nature.

Although he’s bred to be a guard-slash-hunting dog, a well-trained Cane Corso is never unnecessarily aggressive.

He can even be docile and friendly towards strangers, provided he’s been socialized to do so from puppyhood.

If you’re looking for a dog who takes his guarding duties seriously, look no further than the Cane Corso.

Much like human guards, Cane Corsos are always on the lookout for the first sign of trouble.

You can find him pacing around the house, and possibly barking as soon as he notices that something’s off.

When he’s not guarding your home, he’s probably looking for something else to do.

He’s a smart dog who gets bored easily, so make sure he’s always within walking distance from his favorite chew toy.

Otherwise, those teeth will bite into things you’d rather they don’t.

His burly looks might suggest otherwise, but the Cane Corso is a sensitive dog who responds best to positive reinforcement.

If you can balance being assertive and being kind towards him, you’ll be off to a good start.

History and Background of the Cane Corso

Like other mastiff-type dogs, Cane Corsos are descended from the molosser, a Roman dog that was used for warfare, as well as other jobs that required strength and size.

Since his development in ancient times, the Cane Corso hasn’t changed much.

Used as a guard for livestock and property, he continues to perform similar tasks to this day.

One major event in the Cane Corso’s history was his near-extinction in the late 1970s.

Luckily, Cane Corso enthusiasts bred enough of the dogs to keep them from dying out.

Are Cane Corsos Playful and Fun?

The Cane Corso might be serious about his guarding duties, but he’s just as serious when it comes to having a good time.

As shown in the video above, the Cane Corso can be surprisingly adorable when he needs to be.

He can roll on his back, move from side to side, and make googly eyes that say “Hey, can you scratch my belly, please?”

Assuming he’s been socialized from puppyhood, he can be great with children too.

If your kids need a playmate who’ll never get tired of hours of “Hide and Seek,” a Cane Corso can fit the bill.

On the other hand, small children need to be careful around a Cane Corso. He doesn’t always know how big and strong he is!

How Much Exercise Does a Cane Corso Need?

Outdoors-y, athletic types will find an awesome, energetic companion in this dog.

Of course, the best exercise for the Cane Corso is anything that plays to his strengths.

If you’re a farmer who owns livestock, or someone who hunts game for a living, this dog will be more than helpful for you.

But if you don’t live anywhere near a farm or a forest, that’s okay too.

The Cane Corso can make do with daily walks for the first two years of his life.

After that, he can progress to jogging, running and higher impact activities.

It’s important that you exercise your Cane Corso for at least 30 to 45 minutes a day.

Otherwise, if he feels excited and has no outlet for that excitement, he’ll take it out in the most destructive way you can imagine.

Luckily, there’s more than one way to exercise a Cane Corso. Aside from brisk walks and jogging, you can also teach him tricks to keep his mind sharp.

If you don’t mind spending a little more money on your dog, enroll him in an obedience class where he can make use of his abilities.

What are the Grooming Needs of the Cane Corso?

Despite being a short-haired dog, the Cane Corso is actually a double-coated breed. This means he tends to be a shedder, so weekly brushing is important.

Bathing doesn’t have to be as regular for a Cane Corso, however. At most, he should be bathed only once every 6 to 8 weeks.

His fur already has natural protective oils, which can dry up if he’s washed too often. But if he happens to get himself covered in mud, that’s a good time to bathe him too.

It’s also important to trim a Cane Corso’s nails once every 2 or 3 weeks.

If they’re starting to make clacking sounds every time they hit the floor, it means they’re too long.

Get a large, dog-friendly nail cutter, hold your dog’s paws gently, and carefully trim off the edges of your dog’s nails.

Also, clean out his ears once in a while. Using a washcloth dipped in an ear-cleaning liquid like Vibram Epi-Otic, gently wipe the outer part of your dog’s ears.

Avoid poking too deep into the ear canal, or it might get injured and infected.

Ideally, your Cane Corso should be used to grooming from puppyhood.

But if you’re not comfortable grooming him, and/or the feeling is mutual, consider hiring a professional groomer to help you out.

Are Cane Corsos Easy to Train?

As smart as he is, a Cane Corso can end up dominating your household if you’re not careful.

He’s a strong, confident dog who takes no nonsense from anyone, which makes him stubborn and irascible unless he learns the ground rules ASAP.

Training an adult dog who’s already set in his ways is difficult, so train your Cane Corso early.

From the moment he sets foot in your house, you need to be crystal clear on what is acceptable behavior and what isn’t.

Cuddling him when he’s being affectionate is good, but not after he’s just broken your favorite Ming vase.

Generally, dog training should involve teaching him what to do, rather than punishing him for what not to do.

For example, whenever he learns a basic command like “Sit” or “Stay,” give him a treat or two.

Conversely, when he rips your bathroom curtains in two, you shouldn’t stroke him on the belly afterwards, even when his googly eyes are tempting you to do otherwise.

If you’re finding it difficult to keep a Cane Corso under control, get a trainer to help you.

Ask your trainer what you need to do to make it clear to your dog that you’re the “alpha” in the house.

Again, being confident but not harsh is key to training a Cane Corso.

How Much Does a Cane Corso Puppy Cost?

In general, “you get what you pay for” applies to dogs. A lower-priced puppy might have health and behavioral issues that are pricier to handle in the long run.

On the other hand, paying show-quality prices might not be necessary if you’re only looking for a dog to scare unwanted strangers off your lawn.

Don’t forget to account for the annual costs of caring for a Cane Corso.

Assuming your dog doesn’t have any major health issues, expect to shell out an additional $1,641 every year.

Undoubtedly, Cane Corsos are as wonderful as they are majestic.

For those of you who’d had experience with these dogs, or would like to, let us hear your thoughts in the comments!