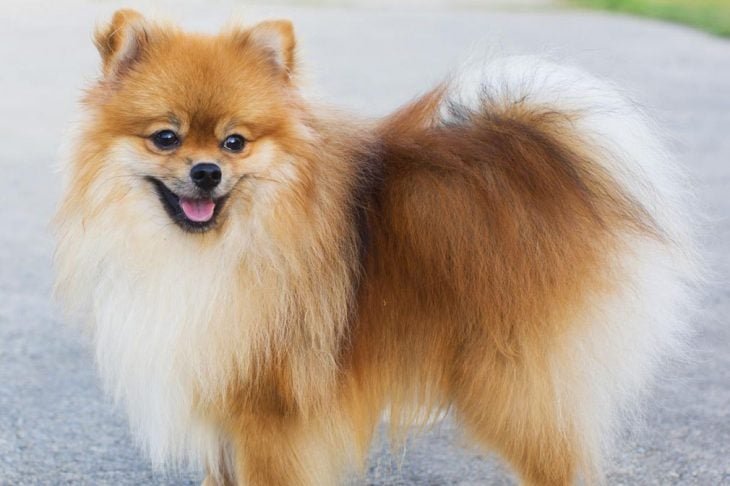 Big things do come in small packages. Just ask the small dog who often goes by the nickname “Pom.”

They will tell you how great they are with one special bark.

This animated extrovert knows how to win hearts thanks to an alert character and a fox-like expression.

You wouldn’t know it unless you did the research, but the breed is part of the German Spitz family.

In fact, the breed hails from the Pomerania region in Germany and Poland.

According to the American Kennel Club, Poms are part of the Toy Dog Breed and are in the top twenty when it comes to dog popularity.

Although they only weigh 4.2 to 7.7 pounds and stand five to eleven inches tall, their personality makes them a formidable presence in the dog world.

Pomeranian’s are suited for royalty. You can tell by the way they hold their tails and by their bold and inquisitive nature.

Queen Victoria was a Pomeranian lover.

The queen had the smaller version, and that’s what made this tiny dog so popular in the 18th-century.

Even so, Poms are generally sturdy and healthy, but they can develop “black skin disease.”

Dogs with this skin issue lose all their hair. The most common health issues for Pomeranians are tracheal collapse and a luxating patella.

An Overview Of The Pomeranian Dog Breed

The Pomeranian has a lifespan of twelve to sixteen years.

They are not afraid to make their presence known by using the distinctive bark.

Even though Poms are active, being a lapdog is their best quality, according to most owners.

This dog comes in eighteen colors and nine different markings.

Their double coat gives the impression that Poms are all hair, but the tail is their strongest personal expression — unless they are barking non-stop to get attention.

The most popular colors are orange, black, and creamy white.

Related: American Bulldog Breed: Everything You Need To Know About This Dog

But other colors like blue, black and tan, sable, brindle, and a combination of those colors are also popular.

Pomeranians demand respect and their cocky attitude can be a little annoying to people who don’t understand the breed.

Poms are easy to train, and they shed when the weather changes.

They are great with children and other dogs, but they need supervision when they are around kids. They have a vivacious personality and love to play.

What is The Pomeranian’s Personality Profile?

Poms have a sense of entitlement in their personality genes. They are not afraid to let everyone know they rule the roost.

Pomeranians are bold and brash, and they are always checking out new sounds, smells, and the activity that is going on around them.

Poms are great alarm dogs, as they know when a stranger is getting too close.

They make everyone aware that strangers are not welcome in the Pom’s human family.

Without proper training Pomeranians can get out of control, so the breed needs early socialization to keep them from going bonkers over unfamiliar people and situations.

Poms don’t like to take orders if they feel the order giver is below them in importance.

This self-possessed little breed doesn’t back down when there is a threat from another dog or a human. And they stand their ground when someone is playing too rough.

Pomeranian ancestors were the sled dogs of Lapland and Iceland.

The breed got its name from the southern coast of the Baltic Sea, but the breed didn’t originate there.

That Baltic Sea area is now part of Germany and Poland.

That’s where these dogs got their small size.

Breeders in the area wanted to produce a smaller dog, and they got their wish by shrinking the big Spitz-type dogs through breeding.

The early Pomeranians were all white, but an occasional black or brown pup would be part of a litter.

Today Poms come in a variety of colors — more colors than any other dog breed.

The latest color is merle. Merle is a combination of a solid color with light blue/gray patches. The patches give the breed a mottled effect.

The thick double coat sheds, so grooming is an essential part of the breed’s history and maintenance requirements.

How Does Pomeranian Playtime Compare To Other Dogs?

Pomeranians are playful, friendly, and vivacious, but they do have an aggressive side when other dogs try to intimidate them.

These dogs are alert and quickly recognize any changes in their environment.

They love to bark when they play, but barking can get out of control during playtime if a Pomeranian doesn’t have the proper training.

This spunky and bright breed is popular, so breeding them is big business.

When breeders cut corners in the breeding process, the result is a dog who isn’t very playful.

Poor breeding creates an unstable temperament, so playtime can turn into fight and bark time quickly.

But as long as Pomeranians have parents who have a solid background, they are great playmates for kids and other dogs.

However, Pomeranians can turn playtime with kids into an “all about me” kind of playtime, and that’s why adults should be present when kids and Poms are having fun.

Does A Pomeranian Need A Lot Of Exercise?

Poms think sitting in the lap of their owner is the perfect exercise for them.

This breed is very active, but there’s not a lot of serious exercise in a Pomeranian’s daily routine due to their fragility.

They can get hurt if a larger dog is around, as they are easy prey. A big dog can cause serious damage to a Pom if they exercise together.

These dogs enjoy being the center of attention. They love to play with toys, and toys are effective tools during the training process.

If you are looking for a breed that will exercise with you and stay cool during your workout, a Pom may not be your best choice.

But if you want a playful lapdog, then the bushy Pomeranian could be the breed for you.

Is It Hard To Groom This Dog Breed?

Poms have a double coat and shed a lot, so a twice-weekly brushing is important.

An occasional bath is also part of the grooming process. A bath will get rid of some excess hair.

The Pom’s fast-growing nails need trimming regularly, and their ears can have a wax buildup, so checking the ears once a week should be part of the grooming routine.

Their teeth need brushing on a regular basis too.

When a Pom looks and feels clean after a grooming, this pup will strut around like they own the place.

They will let you know how good it is to be the center of attention by sharing their love and friendship in their own royal way.

Are Pomeranians Easy To Train?

Poms are smart, so training them is relatively easy, but it can take some time to house train them.

They always find a place to do their business when owners aren’t watching.

Their internal organs do not function properly until they are several months old, so puppies have a history of going potty in the house.

The experts recommend crate training for young dogs, but with constant positive reinforcement and a fair amount of patience, Poms will learn what you expect of them in a short amount of time.

How Much Does A Pomeranian Cost?

It’s not uncommon to see top-of-line, purebred Pomeranians that cost $3,000.

It’s important to know your breeder’s reputation before you take the paperwork seriously.

Those prices include vaccinations, vet exams, a health certificate, registration, and at times, a health guarantee.

The Pomeranian teacup version can cost $2,500 to $5,000, depending on the color, markings, location, and the breeder’s reputation.

The higher price Poms usually have exotic coloring, but the tan and white Poms are not as expensive as the black or dark brown Poms.

Pomeranians aren’t suited for everyone due to their overactive personalities, house training issues, weekly grooming, shedding and incessant barking.

But lovers of this breed usually don’t mind those issues.

They focus on the Pomeranian’s intelligence, friendly disposition, lapdog qualities, and assertive personality.

Owning a Toy Breed can be a challenge, but Pomeranian owners think those challenges are worth the effort because there’s nothing better than an adorable Pomeranian who looks at you with eyes that say, “Take care of me because I’m special.”