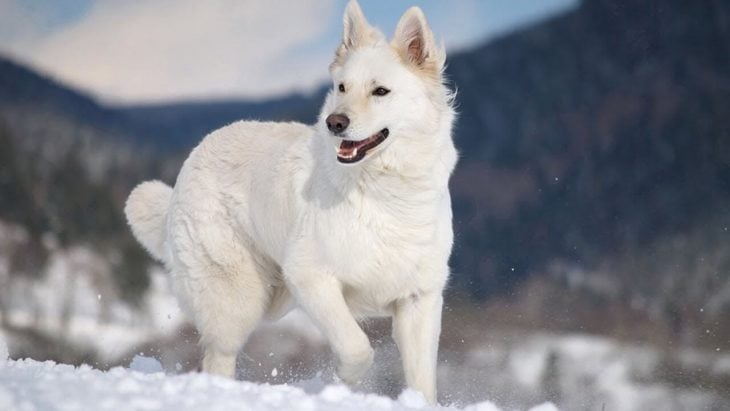 He’s a survivor, a product of years of attempts to breed his gene out of the German Shepherd Dog (GSD).

Lucky for us, those attempts were unsuccessful.

Today, we’ll be unpacking everything you need to know about the White German Shepherd — from the misconceptions surrounding him, to what it means to own this remarkable dog breed.

What Is A White German Shepherd?

We know: That’s a lot of names, and those are just the ones in English!

But make no mistake: He’s not an albino. He’s white not because of a congenital lack of pigmentation, but because of a genetic mutation that popped up sometime in the late 19th century.

So you could say that, in a way, the White German Shepherd is the original GSD.

White German Shepherds aren’t really rare, but they’re not as common as the standard GSD either. There are historical reasons for that.

As mentioned earlier, the white coat gene is recessive in GSDs.

That made it hard for breeders to produce litters of all White German puppies.

Even if they did get a white coat or two, they’re never really sure what to do with the unusually colored puppies.

Over time, whiteness became an undesirable trait in the GSD.

During World War II, when the Nazi Party rose to power, they actively discouraged the breeding of White German Shepherds.

Even after the war ended, countries outside Germany didn’t want the white GSD. In the 1960s, the American Kennel Club disallowed the participation of American White Shepherds in conformation shows.

Twenty years later, the Canadian Kennel Club would do the same thing.

Despite (or possibly because of) the restrictions on white GSDs, breeders kept the dog alive.

It wasn’t until 1999 when the United Kennel Club finally recognized the White German Shepherd as an official dog breed.

If you put a White German Shepherd and a standard GSD behind the screen used in shadow puppet shows, you won’t be able to tell the difference.

That’s because they’re essentially the same dog. They both have erect ears, a square-cut jaw, a curvy yet athletic body, and a long brush-like tail.

Males stand between 24 to 26 inches at the shoulder, while females are slightly smaller at 22 to 24 inches.

The White German Shepherd’s weight ranges from 77 to 85 pounds.

Eye color is usually dark brown but can be anywhere between light amber to dark mahogany.

Some dogs have blue eyes, though they’re not as common as their brown-eyed counterparts.

Since they have different hair lengths, they each have their unique grooming requirements.

There’s a misconception that White German Shepherds are weaker and more docile than their tan-and-black cousins.

Actually, if they’re raised and trained to be so, white GSDs can be just as strong, disciplined and confident as the standard German Shepherd.

Being a working dog, the White German Shepherd isn’t the type to lie around and do nothing.

He needs to always keep his paws busy; otherwise, he’ll get busy ripping the covers off your sofa.

At the very least, a White German Shepherd should be able to exercise for two hours a day.

If you’re the athletic, outdoorsy type, you’ll make a great partner for a dog like this.

Also, he’s a smart pooch. Anything that a German Shepherd can do, he can do too.

And hey, you have the added bonus of turning heads whenever this dog walks down the street.

When properly socialized, the White German Shepherd makes for a loyal and protective companion.

He’s big enough to scare off unwanted intruders, and he’s capable of chasing and pinning people down when he needs to.

Kids will love his playful, energetic personality — as long as they’re big enough not to get knocked down by his 85-pound frame.

How To Train A White German Shepherd

See, the White German Shepherd is a pack animal. Like all pack animals, he has a tendency to look to a pack leader (i.e. you) for guidance and support.

If he can’t get that from you… Well, let’s just say he’ll decide to train himself instead.

If you don’t want to have a hard time training a white GSD, start early.

Teach him the house rules once he reaches the age of 8 to 14 weeks — old enough to be weaned, young enough to be trainable.

But before you make him jump through hoops (literally and figuratively), be sure to master the basics first.

Start with the thing that everyone loves most: The sound of their own name.

Call “Fido,” “Whitey” or whatever you choose to name him, and make him come to you.

If he doesn’t come, call him again. If that doesn’t work, use a different (but hopefully not offensive) name.

Rinse and repeat until he does what you want him to do.

Whatever you do, don’t raise your voice with him.

Your White German Shepherd can’t understand your words, but he can be hurt by the slightest suggestion of anger in your voice.

Also, use consistent and positive reinforcement. If you pat him on the head after he steals food the first time, then smack him when he does it a second time, he’s going to get confused.

(Side note: Don’t ever hit your dog, no matter how tempting it is to do otherwise.)

Whenever he does something right, make sure to reward him in some way.

You can give him treats, or you can pat him on the head and say “Good boy.”

Related: All The Things You Need To Know About The Papillon Dog

And when he does something wrong, let him know as soon as possible.

The moment he starts biting your shoe, for example, yank it out of his jaws and say, in a firm voice:

“No/Stop/Don’t.” If you consistently do this, he’ll eventually get the message that what he’s doing is wrong.

Sometimes, it’ll seem like it’s taking forever for your dog to learn a new trick.

Maybe they really don’t understand what they need to do, or maybe it’s time to switch gears.

Either way, it’s okay to take a break and resume training some other time.

How To Groom A White German Shepherd

The right way to groom a white GSD depends on how long his hair is, and how often he gets himself dirty.

If your Polar Bear German Shepherd has long hair, chances are he lacks the protective undercoat of most GSDs.

That makes him more vulnerable to extreme temperatures, so keep him inside the house whenever there’s inclement weather in your area.

They’re better off staying inside the house, though they should still get the requisite two hours of exercise a day.

As for the short-haired white GSD, he has the same grooming requirements as standard German Shepherds.

Unlike his long-haired cousins, he has an undercoat that protects him against the elements.

He also has natural oils that keep debris off his fur, so be careful not to bathe him too much and risk stripping off those oils.

Both long-haired and short-haired White German Shepherds are heavy shedders, especially during the warm season.

To prevent matting and tangles that could potentially cause skin infections, give your white GSD a brush at least once a week.

Don’t forget to give his body a thorough once-over too.

Check his ears for smelly discharge and other signs of infection.

Gently wipe any dirt around his eyes, nose and other parts of his body.

Brush his teeth at least once every other day. Clip his nails whenever they’re long enough to make unpleasant noises on the floor.

Granted, you may not always have time to give your White German Shepherd some much-needed TLC.

In that case, you can take him to a professional, preferably someone who’s experienced in grooming white GSDs.

It’s also important that you feel comfortable with your groomer.

After all, you’ll be leaving your dog with that person for a few hours at least.

How Much Is A White German Shepherd?

Since the White German Shepherd is rarer than the standard GSD, he’s naturally going to be more expensive.

Remember that those numbers do not include the cost of vaccinations, food, supplies, toys, training and other essentials for a healthy dog.

Be aware, however, that you will get what you pay for. For example, the dog might come from an inferior lineage.

“Cheap” puppies may also have health issues that translate to hefty vet bills, which makes them more expensive in the long run.

The first place you’ll want to look is your local breeder. If you know someone who breeds German Shepherd puppies, chances are they have white GSDs.

Not only are their dogs less expensive, but you’ll also help out dogs who’ve been abandoned or mistreated.

Of course, the Internet is a great source of white GSD sellers. All you have to do is Google “white german shepherd + (insert your area here),” and you’ll come up with good results on the first page.

Related: All Your Questions Answered about the German Shepherd Lab Mix

Wherever you get your dog from, make sure you do a background check on both the seller and the puppy.

These are just a few of the questions you should ask when deciding whether a dog is right for you.

Truth is, the White German Shepherd and the standard GSD are the same dog, albeit with obvious color differences.

The color of the former might make you do a double take, but know that he’s just as much of a German Shepherd as his tan-and-black cousin.

Bear in mind that, while each breed has their general characteristics, every dog will have an individual personality.

Your white GSD can be outgoing and lively, or shy and withdrawn. As long as you can accept him either way, he won’t cause you any problems.

Regardless of what you think of the White German Shepherd, there’s no doubt he’s a special dog in his own right.

Take good care of him, and he’ll reward you with courage, loyalty, and the “oohs” and “aahs” of everyone who sees him for the majestic dog he is.

Are you a dog lover? If so, take just a moment to share this beautiful breed with others on your preferred social media platform.

All About The Shepadoodle Or German Shepherd Poodle Mix0 Total Shares